Scorsese’s Bob Dylan doc tangles up the truth with style

Rolling Thunder Revue makes things up, but it's truer than other films we could mention 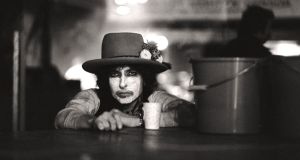 It’s a bit early for Oscar predictions. I can nonetheless confirm that Rolling Thunder Revue: A Bob Dylan Story by Martin Scorsese (that really is the title) won’t be getting a nomination as best documentary. It’s better than some recent winners. Despite being a Netflix release, it comes closer to “proper movie” status than 2017 champ OJ: Made in America. The problem is that large parts of it are made up.

Still engaged with the new technologies at 76, Marty will surely have enjoyed how the documentary played out. Not every Netflix user reads the gossip in arts pages. Not every Dylan fan has an intricate knowledge of the Rolling Thunder tour from 1975. Hundreds of thousands clicked on the link and gawped as Sharon Stone discussed her flirtation with Dylan, filmmaker Stefan Van Dorp explained how he caught the footage and politician Jack Tanner reminisced about his own experiences of the tour. But Stone wasn’t anywhere near Rolling Thunder, Van Dorp is played by actor Martin Von Haselberg and Tanner is a character from Garry Trudeau’s miniseries Tanner ’88. “Ever get the feeling you’ve been cheated?” Johnny Rotten famously asked a few years after Rolling Thunder.

Some people did. But the main reaction on social media was confusion. Plenty of viewers quite reasonably believed all they heard. Others delighted in revealing their followers’ mistakes. Owen Gleiberman from Variety, initially taken in, needed swift footwork to avert professional embarrassment. “I got wind . . . from a fellow critic who’d learned about it, and was able to change those parts of my review at the last minute,” he wrote (decent of him to own up).

A septuagenarian’s film on a 40-year-old tour generated a very contemporary class of online hubbub. That counts as a win. Long a master of the media troll, Dylan will greatly have enjoyed the huffing and the puffing. The maharajah of dissembled truth is still in the game.

The film is now being listed as a “pseudo-documentary”. Fair enough. It’s not a mockumentary in the school of This Is Spinal Tap or Bob Roberts. Excise around 15 minutes from the interviews and you’re left with an excellent doc on an important moment in popular music. The sequence that shows Joni Mitchell introducing Bob and Roger McGuinn to Coyote, a new song from her contemporaneous album Hejira, is worth the cost of a month’s Netflix in itself.

The inventions are less lies than practical jokes. After all, Michael Murphy, the actor who plays Jack Tanner, is well known from such films as Manhattan and Nashville. Nobody involved is expecting viewers to remain disabused for longer than it takes to carry out a quick Google search.

More unnerving were the insecure impressions given by the recent Oscar nominee Minding the Gap. More than a few exhibitors described Bing Liu’s film as the story of three lifelong pals from Rockford, Illinois. Even a close study of the film would appear to confirm that description. Yet at least one of the three skateboarders was unknown to the others until he was 19 years old. The director was frank about his approach to all interviewers. “That was reverse-engineered later, to make you feel like they were ones in my group,” he told the Chicago Reader.

Oddly, none of this caused much controversy in the run-up to the Oscars, but at least three experienced associates of mine – a programmer, a documentarian and a producer – each of whom had enjoyed the film, were astonished to later discover they were being “[made] to feel” something had happened that hadn’t really taken place. The film still works. No explicit lies are being told. But some trust has been betrayed.

Of course, the “truth” in documentaries is always qualified. Michael Moore acknowledges that he approaches his material as a polemicist. The final cut will inevitably be skewed to favour his standpoint. There have been few complaints about Asif Kapadia’s current Diego Maradona, but that filmmaker has also made editorial decisions that mesh with an authorial position. Even the great Frederick Wiseman, famous for austere, rigorous fly-on-the-wall docs such as Hospital and At Berkeley, admits that he cannot present unmediated truth. “All aspects of documentary filmmaking involve choice and are therefore manipulative,” he said.

All this is swell if we are confident the audience will ruthlessly process what is put before it. There is little chance of that on those internet platforms where no-budget, didactic documentaries spread endless lies about chemtrails, immigrant influxes, alien abduction, the risks of vaccination and the controlled destruction of the World Trade Centre. Rolling Thunder is funny. There’s nothing amusing about the dangerous hucksterism that defines this new bandit country. “From the fool’s gold mouthpiece the hollow horn plays wasted words,” Bob sang on It’s Alright Ma.