Review: His earthy storytelling helps counteract the general blandness of this film 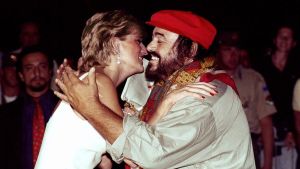 Eight Days a Week, Ron Howard’s recent documentary on the Beatles, somehow found an under-explored angle on that much eulogised band: their power as live musicians. Much effort has gone into his take on Luciano Pavarotti.

Over 53 interviews were conducted. Video was restored. Recordings were re-mastered. Yet we end up with few revelations and few unexpected analyses.

The film undoubtedly has a purpose. With its impeccable audio and visuals, it will play well to fans who, were the tenor still with us, would enjoy live relays of his performances. But this is by-the-numbers stuff.

The familiar story is laid out with bland efficiency. Born in Modena, the son of a baker, the football fan made an early impact at the International Eisteddfod in Wales. Roles at the Vienna State Opera and Australia led on to a famous La Bohème at La Scala for Franco Zeffirelli. (The film does not mention that his first solo concert outside Italy was in Dundalk.)

A successful career in the opera house became something else after the era-defining Three Tenors gig at the 1990 World Cup. Promoter Harvey Goldsmith – one of the more interesting interviewees – explains that, when Bruce Springsteen cancelled a season of London gigs, he grabbed the great man and edged him towards new schools of performance.

In our egalitarian age, we are encouraged to frown on artistic snobbery, but it is refreshing to hear Angela Gheorghiu, the Romanian soprano, express her disgust at the melding of classical with pop (which she pronounces “pope”).

It’s not clear if Gheorghiu feels Pavarotti transcended those compromises, but, while Miss Sarajevo with U2 still works, the gruesome later collaborations with Sting and Zucchero do little to argue for the merits of fusion. By the end, the tenor was engaged in a school of high kitsch whose only redeeming aspect was the generation of cash for good causes.

Good luck finding someone to make that argument more explicitly here. The interviewees queue up to celebrate the brilliance of Pavarotti’s voice, the warmth of his personality and the tastiness of his spaghetti sauces. Discussion of his sexual infidelity and eventual abandonment of his wife is carried out in a tone of sorrow rather than forgivable anger.

It hardly needs to be said that Bono turns up in the later stages. He remains as supplicant as the rest, but the earthiness of his storytelling does something to counteract the blandness all around him.

Still, if you want to enjoy the bellowing, Pavarotti will do well enough. If you want a spiky, creative documentary on a difficult man, Diego Maradona is still in the some cinemas.

Shirley Jackson: ‘It’s thrilling to see a woman who doesn’t care about the niceties of society’
7

Don Delillo: ‘Conspiracies have always been on my mind’
Real news has value SUBSCRIBE