Tomorrowland: ‘I can’t believe my life’ 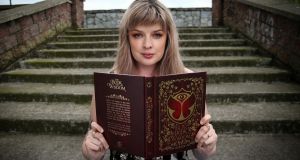 Sarah Maria Griffin with a copy of her book The Book of Wisdom, written in conjunction with the Tomorrowlands dance music festival in Antwerp.Photograph:Crispin Rodwell

The Irish writer Sarah Maria Griffin was recently asked to write a novel for the attendees of the massive Tomorrowland dance music festival in Belgium which begins this week. “I can’t believe this is my life,” she says as she shows me the finished book, a beautifully bound and designed artefact that comes in a specially created case with several props, a secret compartment and an electronic wristband. She currently has two copies – “one for me and one for my mum” – but around 200,000 of them have been dispatched to attendees of the festival.

It’s Griffin’s fourth book. Her third, Other Words for Smoke, was published earlier this year and is an eerily excellent novel about teenage obsession, witches, talking cats and evil supernatural owls. She had just completed this last September when she got a call inviting her to meet the Tomorrowland promoters in Antwerp about writing a book. So she went to Antwerp.

The promoters had lots of ideas based on the general lore of the fifteen year old festival. She scribbled it all into her notebook over the course of several conversations in their beautiful office in an old police station in Antwerp. It felt surreal, she says. “They have bee hives on their mezzanine ... Their big meeting room has a heart shaped table.”

Griffin has always wanted to be write strange fantastical tales

The resulting novel, The Book of Wisdom, is set in an infinite library which is also a portal between worlds. At the time she wrote it, Griffin was the writer in residence in Dun Laoghaire library so she knows a bit about libraries, and if you’ve read Other Words for Smoke you’ll know she also knows a fair bit about portals between worlds. Furthermore, her two questing heroes hail from Raheny, where Griffin is from, and San Francisco, where she spent formative adult years.

Griffin has always wanted to be write strange fantastical tales. As a child she dived into Mervyn Peake’s Gormenghast (the BBC TV show and the books) and Randall and Hopkirk, Deceased (the original and the Vic and Bob remake) and she dispatched early self-penned manuscripts to publishers she found in the Yellow Pages.

When she left college in 2011, she got involved in the storytelling event Milk and Cookies where she befriended other writers like Deirdre Sullivan and Dave Rudden. But things were not looking bright for young people in Dublin in those post-boom years. “It felt like every Friday in the pub it was someone’s going away party,” she says. “There was no point in staying. It was getting desolate.”

She ended up going to San Francisco where she worked as a nanny, a bookshop worker, a receptionist and “a content gremlin” for a start-up. She wrote about her emigration experience for this paper and these writings ultimately led to her book of essays, Not Lost. “I wrote to understand what was happening to me. I wrote a piece about having a hay-fever attack in Walgreens and it was the first time I cried about leaving home and I couldn’t stop and it ended up on the cover of the paper."

“It’s about the pursuit of company that’s beyond human. And that’s what the internet is for me. It’s a pulsing extra"

She also began writing her first novel, Spare and Found Parts, set in a technophobic post apocalyptic Dublin, while in San Francisco. “It’s about the pursuit of company that’s beyond human. And that’s what the internet is for me. It’s a pulsing extra . I guess it’s about finding company when human company isn’t enough."

Does the internet feel like that to her still? “It used to ... It’s a hall of mirrors now ... I was writing in San Francisco and suffering hugely with constant alienation, so it’s effectively also a book about alienation and not being able to connect with anyone around you no matter what you do.”

She and her now-husband, Ceri, returned to Ireland in 2015. “We left San Francisco for the same reason we left Ireland, everyone we knew was leaving,” she says. “The city pushed us out.” She talks about how tech companies pushed up rents and living expenses in San Francisco. “And the same thing is happening in Dublin now so I feel like I’ve experienced all of these cycles that replicate each other over and over.”

It sounds almost like a fantasy novel. “Absolutely, being caught in loops.”

Her most recent non-dance-festival-related novel, Other Words for Smoke, was finished in early 2018 after a period spent lying immobile with a herniated disk. It’s a wonderfully creepy book and involves a character developing an unhealthy relationship with an evil supernatural owl who lives in the walls. She says it was very influenced by her time dealing with chronic pain and isolation. Did she see an owl in the wall? “I wish I had,” she says. “It would have been something.”

Griffin’s books are often marketed as Young Adult literature and she thinks there is some snobbery in the literary establishment about YA writing. “But if most of my readers are young women, that’s fucking great. I’m glad to be talking to them. Few enough people are.”

She is similarly defiant about writing sci fi and fantasy stories rather than literary realism. “I think science fiction is drag,” she says. “It’s the costume you put on to tell the truth. The things that you assemble and the kaleidoscope you pull yourself through to tell the most honest and accurate truth about the world that you can... I think it’s a codex system of understanding. I know how the interior of this hotel lobby operates. That’s fine. It’s enough but I don’t really want to settle for enough. I’d rather go further… I don’t think I’m happy with real life.”

As we speak, Tomorrowland punters around the world have received the book

She started writing the Book of Wisdom almost immediately after completing Other Words for Smoke and while it was a huge challenge she really enjoyed working with the people at Tomorrowland. As we speak, Tomorrowland punters around the world have received the book and are uploading photos and videos to social media sites. “If even 10 per cent of them are curious about the girl who wrote it,” she says. “My own work will thrive.”

The story in the book, she says, is also the story of the book. “On the one hand, its set in these beautiful worlds and it’s about this journey these two people go on but it’s also on a very serious emotional level about what happens when someone puts you on to an adventure you don’t know if you’re prepared for.”

What happens? “You do it anyway.”

Tomorrowland is currently up and running in Boom, Belgium. It runs over two weekend from the 19th to the 28th of July.