The Lion King: Ruined by slavish devotion to the original

Review: It’s technically remarkable but the characters are weak and the story a carbon copy 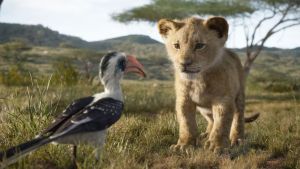 The Lion King, featuring the voices of James Earl Jones as Mufasa, and JD McCrary as Young Simba

Many pundits have already wondered what (aside from the expected generation of $1.5 billion or so) is the point to this pseudo-live action translation of an animated Disney smash. The prevailing consensus among the indifferent reviews is that the very idea is flawed.

Yet, just three years ago, the Mouse House surprised everyone by finding fresh, amusing energies in The Jungle Book. The new Cinderella was pretty good. Those few people who saw David Lowery’s Pete’s Dragon were profoundly charmed.

The recent Dumbo and Aladdin at least tried something different, but The Lion King is scuppered by a slavish devotion to the original that slackens only when making gentle swerves towards the blandest corners of the Savannah. Are we frightened of what people will say on the internet?

In 1967 the corporation was prepared to tear Kipling asunder for The Jungle Book. We are more cautious now.

It goes without saying that this Lion King is a remarkable technical achievement. Indeed, not so long ago it would seem like the work of witches. Scrunch your eyes up, put your hands over your ears and you could be watching an uncharacteristically boring nature documentary on the BBC.

Yet nobody has done anything worth doing to character or story. It’s as if, 50 years ago, Nasa invested all that money in developing the world’s shiniest technology and used it to repeat the Mayfair’s voyage to Plymouth Rock.

Almost everybody will know the story (from Hamlet if nowhere else). Young Simba is born into a royal leonine family and, after baptism by an ape, is introduced to his evil uncle Scar. A domestic tragedy propels him towards a farty warthog and a wisecracking meerkat who, like Baloo in The Jungle Book and Falstaff in Henry IV, argue for fun over responsibility. We know how those arguments end.

In the run-up to release, much fuss was made about the casting of black actors in voice roles. This makes sense in an African tale, but questions still remain. The prevailing timbre is American for the heroes and – yes, we are still doing this – English for the villains and twits. (John Kani and Florence Kasumba are among the sparse African contributors.)

Few compare favourably with their predecessors. John Oliver is not allowed to hail from his native Birmingham when voicing the pompous hornbill Zazu. Donald Glover and Beyoncé Knowles-Carter scarcely seem to be trying as Simba and Mala.

The gravest problems are, however, with Chiwetel Ejiofor as the evil Scar. Ejiofor is, as a performer, at least the equal of Jeremy Irons, but he exhibits none of Jezza’s gift for fruity pantomimic villainy. It’s almost as if Chiwetel is doing proper acting. You’re an evil lion. When better to munch the bleeding scenery?

The voice-talent’s efforts are, to be fair, hampered by the animators’ deadening compulsion to create photo-realistic versions of the species depicted.

Whereas the 2016 Jungle Book retained a degree of anthropomorphism, this Lion King cares only for making lions look like lions. As a result, the voices seem imposed on pre-existing footage – shot beneath blandly monotonous skies – rather than emerging from compatible, imaginatively distorted personalities.

In the past, Disney fashioned characters to the eccentricities of each voice. They can’t do that when constrained by zoology textbooks.

As the film dragged on from one unnecessarily extended scene to the next Oscar-baity original song, this older critic wracked his brains as to what bells the awkward approach was ringing. It came at the end.

The Lion King suggests the late Johnny Morris’s work on the ancient television show Animal Magic. You remember. The presenter would take film of animals in zoos and improvise conversations over their antics. It was funny, unpretentious and it cost next to nothing.