Don't talk to me; the conversation campaign is over

Welcome, once again, to silence on the bus and personal distance on the train 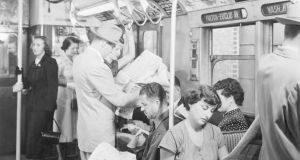 The newspaper was invented to provide commuters with a physical and symbolic barrier between themselves and the embarrassing bus lunatic. Photograph: Bettmann Archive

It’s safe to get back on the bus in Northern Ireland. A campaign aimed at cracking the social cocoon that urban dwellers so savour is in its dying stages.

“Translink is daring you to strike up a conversation with fellow passengers to break down social barriers and connect with people from all walks of life,” the statelet’s public transport service warned. The Twitter post, part of the “Crossing Divides” scheme, arrived above a cheery video that broke new ground in its dedication to euphemistic evasion.

Rebecca Maguire, former Miss Ireland and qualified pharmacist, and television presenter Joe Lindsay invite each other to take the bus towards neighbouring communities. Rebecca recommends “wonderful west Belfast”. Joe believes that “East is really where it’s at.” In the longer version of the video they discuss how these two regions have, for too long, been separated by ignorance and mistrust.

We understand the importance of keeping things light here, but nobody who has even heard of Northern Ireland will avoid a snort at the creative dissembling. Yeah, that’s what has divided this part of the world for so long: compass points. When it bothers to sit, the Northern Ireland Assembly invites its members to declare for east or west. Right?

Elsewhere, the campaign gets closer to its true intent when it invites travellers to start a conversation with someone from “a different background to you – be it age, ethnicity, politics or religion”. Unhappily, it offers no advice as to how, just by looking, you can tell if your neighbour worships differently. It’s something to do with the eyes, I bet.

It goes without saying that the avowed intent behind the campaign is admirable. We should get on better with one another. The more we interact with diverse cultures, the happier and more interesting we become. No argument there.

There is, however, no justification for trespassing on somebody’s personal space when they are using public transport. People come to cities to get away from uninvited interaction. Space prohibits a comprehensive inventory of reasons to avoid the horrible, horrible countryside (next week, maybe), but the relentless friendliness of its inhabitants would be top of any list.

They’re always leaning on gates and wondering where you’re from. You can’t enter a pub without some weather-beaten ancient threatening to play dominoes with you. This is, at any rate, the impression I got from watching an episode of All Creatures Great and Small in 1989.

The city is anonymous, unfriendly and short on community. Those are only a few of its attractions, but they are worth protecting against such campaigns of municipal interference. Most city dwellers have long ago learned the eyes-down urban slouch that, when moving from pavement to seat, deters interaction with embarrassing bus maniacs.

The invention of the city allowed the public to become private. Its continued survival as a refuge for the unfriendly depends on preserving the sanctity of private space on the 47A.

Mention of this tends to trigger the telling of a recent, but already unavoidable, myth for the digital age. This legend has it that, before the arrival of the smartphone, buses, trains and trams were awash with busy conversation between hitherto unfamiliar travellers.

Merriment was uncontained on the 8:30 to Mullingar. Many were the lifelong romances launched on the last bus to Dooradoyle. This all ended with the advent of portable Facebook and handheld Angry Birds.

This is a total lie. The smartphone has certainly decreased face-to-face conversation between people who already know one another. After centuries of mindless chatter, we now have a decent excuse to ignore our partners when dining in open space. Good man, Steve Jobs. That device has, however, had little discernible effect on the interactions between strangers on public transport.

The newspaper was invented to provide commuters with a physical and symbolic barrier between themselves and the embarrassing bus lunatic. Among the attractions of commuting was the opportunity to chew up yards of prose. Travelling on the 38 bus from Hackney Downs to Cambridge Circus in the early 1990s, I made my way happily through Little Dorrit, Vanity Fair and Melmoth the Wanderer. There must have been some interactions with nearby commuters, but I remember none lengthier than “Excuse me.”

We sincerely hope that the Crossing Divides campaign made advances in bringing people together. Nothing does that better than a common cause. If the scheme is revived next year, I would invite people of all faiths, ages, ethnic backgrounds and, yes, compass points to unite in a plea for silence on the bus and personal distance on the train. If you want to talk to strangers, the countryside is right over there.