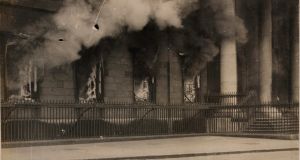 The Custom House, then centre of local government, burns in May 1921. The operation to destroy it involved nearly 200 Volunteers. Photograph courtesy of the National Library of Ireland

The first six months of 1921 were by far the most violent period of the Irish War of Independence.

In late 1920, a halt to the violence had looked possible. There were secret talks via intermediaries between the British government of Lloyd George and Sinn Féin president Arthur Griffith, with a British offer of dominion status or self-government within the Commonwealth, for Ireland.

The talks stalled on the insistence of Hammar Greenwood, the chief secretary for Ireland, that the IRA would have to first surrender its weapons and Neville Macready, the British Army commander in Ireland, also voiced the belief that a truce would strengthen the IRA. He pressed for martial law, declared in parts of Ireland in late 1920, to be given a chance to deliver results.

Lloyd George assented and crown forces were given the task of crushing the IRA before talks could again resume. The guerrillas’ success lay in forcing the British government to talk to their leaders without preconditions but this achievement cost well over 1,000 lives between January and July 1921.

The guerrilla war was at its most intense in Munster, where martial law was proclaimed in late 1920. In March 1921, the British commander Macready wrote: “The rebels in the martial law area carry out operations [which] . . . frequently resemble a minor military engagement as distinct from small ambushes formed by men who shot and ran away,”

The formation of IRA flying columns in late 1920 initially meant larger and more regular engagements between the guerrillas and British forces. In Co Cork, there were large ambushes at Coolavig and Clonbanin. Eleven policemen died at the Dromkeen ambush in Co Limerick. In Co Kerry, an ambush on a train carrying troops at Headford Junction killed nine soldiers and wounded 25.

But the flying columns also gave the British the opportunity to hunt down relatively large bodies of guerrillas. Tom Barry’s 3rd Cork Brigade column, about 100 strong, was almost trapped by a British sweep of more than 1,000 men at Crossbarry in March. It fought its way clear, killing 10 British soldiers.

The column of Cork No 1 Brigade, which was surrounded in a safe house at Clonmult, was not so fortunate. Of the 20-strong column, five were killed in combat, before the rest, with the house burning around them, surrendered, only for seven to be shot by the Auxiliaries. Another six Volunteers were shot dead after capture when they were surprised in a billet at Clogheen.

As the British deployed more troops and resources to the south, the character of the conflict began to change. The British used aerial reconnaissance and mounted huge drives of thousands of troops across the countryside. They also began to deploy small ‘active service platoons’ to hunt the flying columns.

These methods meant that large-scale ambushes and barrack attacks became much more difficult for the Munster units to pull off and forced them to concentrate on smaller-scale shootings and bombings in the final months of the conflict.

While no part of Ireland was entirely peaceful, outside of Munster, there were only isolated pockets of intense guerrilla activity. Seán Mac Eoin’s Longford unit carried out a successful ambush of Auxiliaries at Clonfin in March, but after his arrest the activity in the area slackened.

Eoin O’Duffy, IRA commander in Monaghan, was noted for his efficiency, but mounted relatively few large attacks. In his command and elsewhere, most IRA activity consisted of blocking roads, intimidation of collaborators and individual shootings.

Efforts to create a flying column in Leitrim ended in disaster for the IRA when Seán Connolly, along with six other Volunteers, were surrounded and killed at Selton Hill.

In the west, guerrilla activity took off in spring 1921, with successful IRA ambushes at Tourmakeady and Carrowkennedy in Mayo, but also failures such as at Kilmeena, where seven IRA members died in a failed attack on a patrol.

The war in Dublin

In Dublin, an Active Service Unit (ASU) was set up in January 1921, comprising of roughly 100 men divided between each of the city’s four IRA battalions. They were dedicated to mounting at least three attacks a day on British forces in the capital. Usually, this meant throwing an improvised grenade at troops, a volley of revolver shots and a quick getaway.

By the time of the truce in July 1921, these street ambushes had killed dozens of police and soldiers, but also 46 civilian bystanders and wounded hundreds more, inevitable collateral damage of such attacks. The British responded by cordoning off large areas of the city and conducting house-to-house searches.

Dublin was primarily important for its symbolic and propaganda value, and Éamon de Valera, president of the Irish Republic, was particularly keen for a spectacular show of force there, against the cautious instincts of both Michael Collins and IRA chief of staff Richard Mulcahy. The result was a large operation involving nearly 200 Volunteers, to burn the Custom House, centre of local government.

The operation, mounted on May 25th, 1921, was a propaganda success for the Republicans – the Custom House all but completely destroyed. But the operation also led to the capture of more than 80 IRA men and the death of five.

The Squad and the Active Service Unit of the Dublin IRA had to be amalgamated into a single ‘Dublin Guard’, such was the shortage of reliable manpower in Dublin after the affair. Nevertheless, the violence there went on. The Dublin Brigade’s attacks fell from 107 in May and 93 in June, showing that IRA was damaged by the losses at the Custom House, but not fatally so.

Northern Ireland was born in 1921, its parliament opening in June. IRA units found it difficult to operate in the unionist-dominated North except on it southern Catholic fringe, which harboured, for instance, Frank Aiken’s Newry Brigade.

In the North, the IRA, the RIC and the Ulster Special Constabulary – an almost exclusively Protestant force raised in mid 1920 – exchanged reprisals. In Belfast, a city in the 1920s dominated by Protestants, Catholics were regularly subjected to sectarian assault in response to IRA actions.

The day before the truce, for instance, July 10th, became known as “Belfast’s Bloody Sunday”. Loyalists, incensed by an IRA ambush in the city the previous day, attacked the Catholic enclaves in the centre and west of the city, provoking days of gun battles that left more than 25 people dead, hundreds injured and 161 houses destroyed.

In the North, unlike elsewhere in Ireland, the truce of July 11th did little to end the violence.

Killings of captured and suspect IRA men became increasingly common among crown forces in 1921, as did official executions, in which 13 Volunteers were put to death.

This inevitably led to IRA retaliation. In Cork city on February 28th, six IRA men were shot by firing squad. The following day, 12 British soldiers were shot, and six killed in the city.

Terror also rippled out to the civilian population. Hardly any civilians had been shot as informers by the IRA prior to 1921, but in the first six months of that year, they killed at least 180.

Co Cork saw by far the greatest number of alleged informers killed, 78. In at least one case, that of elderly loyalist Mrs Lindsay, who had given away an IRA ambush, the Cork IRA proceeded with an execution in direct defiance of the leadership in Dublin.

In Dublin itself, where violence was more tightly controlled by IRA GHQ, there were few informers shot until May and June 1921, when 13 were shot in quick succession.

Crown forces’ discipline improved somewhat in 1921 compared to 1920. Random attacks on civilian property and shooting of civilians declined. But killings of IRA prisoners rose and the mayor and former mayor of Limerick were assassinated, it is thought by undercover police, on the same night, in March 1921.

Under official reprisals in 1921, homes in the vicinity of attacks on troops or police were routinely blown up. And in spite of the IRA’s ruthless killing of informers, it was crown forces who killed more non-combatants – 381 compared to 281 (though the responsibility for deaths of 236 civilians is still uncertain).

By the summer of 1921, the British military claimed it had the IRA on the run. Certainly, with hundreds dead, nearly 6,000 in prison and with ammunition scarce, the guerrilla army was under severe pressure.

But the military and police casualty figures were still rising, not falling, in June 1921. Greenwood, the chief secretary, acknowledged there “a very marked increase in rebel activity throughout the country”. Macready, the commander in chief, told the government they must use wholesale internment and executions, or offer negotiations. It was an admission of failure by the men who had favoured crushing the IRA through martial law at the start of the year.

There was no appetite in Lloyd George’s government or among British public opinion for a war in Ireland of this magnitude.

By July 1921, both sides were willing to talk about a settlement without preconditions. A truce was arranged for July 11th. While, particularly in the North, the truce was never fully respected, the way was now open for a negotiated end to the conflict.