How did Yeats interpret his own poetry? A clue lies in an Irish Times article from 1923

From the archive: ‘Mr Yeats was enjoying the satisfaction of recognition in his own lifetime’ 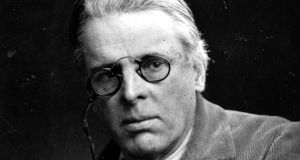 WB Yeats was invited to speak at St Bartholomew’s Vicarage by the Rev Walter Simpson, as part of the parish’s annual sale of work in 1923. Photograph: Getty Images

In times of political upheaval, the poetry of WB Yeats is frequently quoted, particularly The Second Coming, with its very repeatable and malleable line: “The centre cannot hold”.

Leo Varadkar quoted it when addressing the European Financial Forum in the days following the general election earlier this month, saying, “The political centre in Ireland has been shaken, it’s diminished but it has held, it still represents the views of the majority of people and the majority of representatives in our new parliament, Dáil Éireann. The dark future, the Second Coming prophesied by WB Yeats, has not yet come to pass.”

That is a particular reading of the poem, as it was written in 1919 in the aftermath of the first World War and the beginning of the Irish War of Independence, and so one could point to the ensuing events in both Ireland and Europe as “the dark future”. That line about the centre has since been used and interpreted liberally by other artists including Joni Mitchell, Joan Didion, Lou Reed, Sleater-Kinney and many more.

But how did Yeats himself interpret his own poetry? One clue lies in an Irish Times article from 1923 about a reading the poet gave, reported under the headline: Mr WB Yeats’s Secrets: How his poems were inspired. “In the library of St Bartholomew’s Vicarage, Clyde road, Dublin, yesterday afternoon, Mr WB Yeats talked for an hour about his own poetry.” Yeats was invited to speak by the Rev Walter Simpson, as part of the parish’s annual sale of work.

“Yeats the lecturer had all that subtle charm wherein lies the appeal of Yeats the poet. His reading of some of his best-known poems was something which every member of the large audience will remember with pleasure.” The politician JG Swift MacNeill was also at the event, saying that it was a rare occasion where one could hear from a great poet how they came to write their poetry.

“Mr Yeats was enjoying the satisfaction of recognition in his own lifetime,” the reporter wrote “with the knowledge that his genius would be appreciated by posterity, and that his name would be revered in every age and in every land where there were lovers of literature and true learning”.

Yeats relayed his own origin story at the event, saying that he became a poet because of where he lived as a child and as a young man, with his grandparents in Sligo, and that whenever he looked out the window of their house on to Benbulben mountain, William Allingham’s words came to him: “Up the heathery mountain. Down the rushy glen. I dared not go a-hunting for fear of little men.” Yeats, he said himself, made up his mind that he would try to do in verse for Sligo what Allingham had done for Ballyshannon. In London, homesick for Sligo, Yeats saw “a jet of water playing in a shop window as an advertisement”. It reminded him of home, and so he wrote the poem The Lake Isle of Innisfree.

“In the neighbourhood of Sligo and Ballisodare he came in the course of time to gather stories from the country folk in their homes. Gradually he got to feel that, as he stepped over the threshold of a cottage door, he was passing into another continent. He came to take a delight in the minds of the country people because of the quality of those minds.”

When Yeats published the poem The Song of Wandering Aengus, a newspaper offered a prize to anyone who could figure out its meaning. The prize, a volume of Tennyson, was won by a person who interpreted the poem as a political allegory. Yeats spoke about that at the event saying the origin of that poem, was an apparition a 70-year-old man had observed of “a beautiful girl who at once vanished into the ground. And so mournfully he would repeat, ‘Never again, never again.’” It was “old man’s life-long grief at never again beholding the beautiful vision,” that birthed the poem. Another vision of a woman seen by an elderly servant to Yeats’s uncle in Sligo inspired him to write The Host of the Air.

On the patriotic flavour of some of his poetry, it was explained: “Mr Yeats dealt with the poetic inspiration of Irish patriotism, the emotion inspired by Tír na nÓg. In Hanrahan’s Song about Ireland he put this emotion into the mouth of the most disreputable man singing to the most disreputable people he could collect in medieval Sligo. There was another patriotism, the patriotism of Protestant Ireland, with less of certainty than that of Catholic and Gaelic Ireland. Protestant patriotism was a hesitating thing, but it had its own nobility, its own heroism. His Irish Airman Foresees his End [sic] was written to express that patriotism.”

On Saturday, February 4th, 1939, the death of Yeats was announced in the Weekly Irish Times, and an ensuing obituary published. He had died the previous Saturday at the Hotel Idéal Séjour in Menton, France. “His health was very delicate, by reason of a heart affection,” the report read, “and, according to Reuters’ Nice Correspondent, he was seen out frequently in a bath chair, but walked occasionally in the garden of the hotel or in the little park adjoining it. Last week, however, he took to his bed, and since Tuesday he had not been able to get up.”