An IRA intelligence book dating from the War of Independence is being put on display for the first time in National Museum of Ireland. Video: Enda O'Dowd 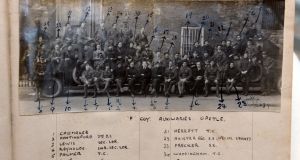 A mole within Dublin Castle was able to identify all 37 men in a photograph of F Company which reported to the chief of police in Dublin Castle and was involved in intelligence. Photograph: Dara MacDonaill/The Irish Times

The lengths to which the IRA went to target enemy intelligence officers in the War of Independence is revealed in a photograph album which has never been made public before.

Described by National Museum of Ireland curator Brenda Malone as a “find of national importance”, the album features photographs detailing those who the IRA wished to target.

It was owned by the family of Monaghan IRA commander Matt Fitzpatrick. He was shot dead in February 1922 during a gun battle which ended in the deaths of four members of the Ulster Special Constabulary (the B Specials). That incident became known as the “Clones affray”.

It is uncertain how the photographs ended up with Fitzpatrick as he does not appear to have been involved in IRA intelligence during the War of Independence.

The blue hardback album entitled News Cuttings has belonged to his nephew, Gerard Fitzpatrick, who has now loaned it to the museum at Collins Barracks.

Ms Malone said the book was too valuable to put on public display, but the images would be available to the public in the museum’s updated Irish Wars 1919 to 1923 exhibition which includes 50 new exhibits from the War of Independence. It will open on Tuesday in Collins Barracks.

The exhibition will also include an exhibit of hair shorn from a woman who was “bobbed” by the IRA – hair cut for consorting with the enemy. This exhibit was in the hands of Michael Barry, brother of Kevin who was executed during the War of Independence.

At his trial for IRA activities in 1920 Michael Barry claimed the hair came from an aunt of his who had decided to become a nun. However, he later stated that it was from a woman who had her head shaved during the War of Independence. It will be included in a section of the exhibition devoted to the role of women in the war.

Ms Malone explained the significance of the IRA book: “It helps us to piece together how intelligence operated and how many people were involved even if they were not in the IRA.”

In order to identify enemy targets, the IRA needed photographs. Most photographs 100 years ago were staged in studios and hard to come by.

Michael Collins was able to walk around Dublin during the war with relative impunity because the British did not have a reliable photograph of him.

It is clear from the album that F Company of the Auxiliary Division of the Royal Irish Constabulary was a particular IRA target.That company reported to the chief of police in Dublin Castle and was involved in intelligence.

A mole within Dublin Castle was able to identify all 37 men in a photograph of F Company, including the notorious Capt Eugene Igoe, leader of the so-called Igoe Gang.

The album also includes a famous photograph from the War of Independence of a group of British intelligence officers. It has often been miscaptioned as a photograph of the Cairo gang wiped out on Bloody Sunday, but it is clear that the photograph was taken after Bloody Sunday. It is captioned as the “murder gang”.

According to research website theauxiliaries.com, the men pictured were also from F Company.

Shot dead while off duty

One of those is identified as Donald McClean from Co Down who is described as “P Clancey’s (sic) murderer”. Peader Clancy was one of three IRA men picked up by the Auxiliaries and killed in Dublin Castle on Bloody Sunday.

Another in the photograph, Second Lieut George Appleford, a first World War veteran from London, was shot dead by the IRA in June 1921 while off duty in Dublin.

According to Frank Thornton, who was IRA deputy director of intelligence, Collins was supplied with captioned photographs of the Auxiliaries by Second Lieut John Charles Reynolds.

He was an English-born first World War veteran who joined the Auxiliaries and was later transferred to G Company in Co Clare. He may well have been the person who also supplied the photograph and detailed captions of G Company which are in the album.

Others IRA targets are identified by individual photographs. Sgt Thomas Singleton is listed as the man responsible for hanging four men after the Drumcondra ambush. Four IRA volunteers, Frank Flood, Mick Magee, Patrick Doyle and Thomas Bryan were hanged in Mountjoy Prison after a raid on a party of Auxiliaries that went wrong in January 1921.

Royal Irish Constabulary Det Thomas Gore-Hickman, who tipped off the British military that a contingent of IRA volunteers was billeted in a house outside Selton Hill in Co Leitrim, is also identified.

The resulting ambush by soldiers from the Bedfordshire Regiment on March 11th, 1921, led to the death of six IRA volunteers. Gore-Hickman emigrated to Canada after the war.

Along with identifying the enemy, the IRA also identified meticulously those working for the British who might be of assistance to them. A photograph of staff in Dublin Castle identifies those who were Irish and those who were not. One of them was Elizabeth “Lily” Mernin. She worked as a typist in Dublin Castle and was the source passed on addresses of agents targeted by Collins’s squad on Bloody Sunday.