From the Archive: Gay rights groups went to court and held protests over exclusion 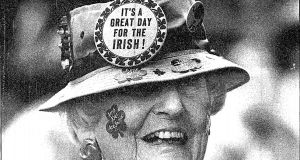 In 1992, Cork made history when its St Patrick’s parade included the first-ever LGBT float to take part, which also won best new entry in that year’s parade. But over in New York, all was not well.

“With only eight days to go before March 17th,” Conor O’Clery wrote in a piece published on March 9th, 1992, “no one in New York, where the biggest St Patrick’s Day parade in the world takes place, can say if there will be a parade this year, or if there is a parade who will run it, or if a gay Irish group will be allowed to march, and if they do march what will happen.”

That day, gay rights organisations appeared in court in New York and Boston fighting their exclusion from the parades. There was parade in-fighting too.

Members of the Irish Lesbian and Gay Organisation (ILGO) and their supporters, chanted, ‘Two, four, six, eight – how do you know St Patrick’s straight?’

The Manhattan branch of the Ancient Order of Hibernians (AOH) “has jealously guarded its traditional right to organise the annual celebration,” O’Clery wrote, and because of the refusal of that branch to admit gay participants marching behind their banner, the then New York Mayor, David Dinkins, gave the parade permit to the New York State AOH and their new parade organiser Tony Creane, with further fractures caused when many AOH officials pledged their allegiance to the ousted parade organiser Frank Beirne.

“The court hearing began on Friday and involved altercations between the two sides,” O’Clery wrote, “Ms Anne Maguire of ILGO [\Irish Lesbian and Gay Organisation\] was asked by the AOH lawyer if members of the gay group had ‘fondled’ one another during the parade last year. She said no.

Mr Beirne was asked by a city lawyer if he had referred to division seven of the Manhattan AOH as the ‘fag’ division. He said he had been quoting from a paper.”

In court in Boston, a Boston City Council member, James Kelly, said the Irish-American Gay, Lesbian and Bisexual Pride Committee of Boston “was a front for the militant homosexual groups ACT-UP and Queer Nation.”

Eventually, a federal judge refused to grant an injunction forcing the AOH to allow ILGO to march, and they were effectively banned from the parade.

ILGO decided to walk a few blocks along Fifth Avenue from 59th Street to 68th Street, and then hold a demonstration at the corner of 68th Street. ILGO had actually marched the previous year, invited by an AOH chapter that was subsequently ejected from the parade.

The day after the parade, March 18th, Mary Maher reported from New York that around 500 ILGO members marched before the main parade, under heavy police escort.

The following year, in 1993, the same argument erupted, this time with a more severe outcome. 179 people, mostly lesbian and gay, were arrested while protesting their exclusion from the parade.

“Members of the Irish Lesbian and Gay Organisation (ILGO) and their supporters, chanting, ‘Two, four, six, eight – how do you know St Patrick’s straight?’ sat down in the middle of Fifth Avenue between 42nd and 43rd streets,” William Reilly reported. Brendan Fay, an ILGO spokesman said, “This day, March 17th, 1993, will go down as the saddest St Patrick’s Day in New York history. Even in Dublin they are welcome as any other group.”

Before that parade, an injunction was obtained forbidding ILGO members from marching. Instead, they gathered in front of the New York public library on Fifth Avenue, waving signs such as “‘Ray Kelly: Top Cop Bigot,’ referring to the police commissioner who was marching in the parade,” Reilly wrote. The banned AOH chapter, Division 7, was also ousted from the parade again. It’s president, Bernie Morris, was quoted in The Irish Times as saying, “It’s a petty and mean-spirited act by narrow-minded and little men”.

There had been an understanding earlier in the year that ILGO would be permitted to march in 1993, as Kathleen Magee reported that January in the newspaper. Again, it was to do with the convoluted assigning of permits and permissions. Commissioner Kelly had said at that point that AOH had violated the city’s human rights laws.

The ILGO spokeswoman, Anne Maguire, said that the decision was unexpected, and that she believed the upcoming mayoral election had something to do with it, “Everybody who runs for election knows the strength of the vote in the gay community. It has a much bigger voting bloc in New York than the Irish community and that’s very important to politicians . . . This is the start of things. Once we’re officially in and we turn up every year, 10 years down the line we’ll just be part of the parade and that will be it.”

The struggle lasted much longer than 10 years.

But money began to talk. Guinness pulled its sponsorship from the New York parade, and Heineken and Sam Adams pulled theirs from the Boston parade. In 2015, an LGBT group from NBC Universal marched. Finally, in 2016, the ban was effectively lifted, when the Irish LGBT group, the Lavender and Green Alliance was permitted to march in New York.