Weekend TV guide: 6 of the best shows to watch

Kylie & company at Glastonbury, plus ’70s-set US sitcom The Kids Are Alright, Auschwitz survivors 70 years on, and former tennis brat McEnroe at 60 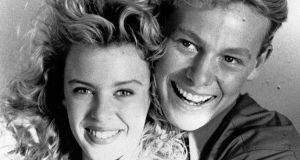 Kylie Minogue, here with fellow heartthrob Jason Donovan back in the day, will perform Sunday at Glastonbury. Photograph: PA Wire

The Kids Are Alright
Friday, RTÉ One, 7.30pm
This good-natured US series, set in California in 1972, follows an Irish Catholic family and struggles of the conservative working class parents (played by Mary McCormack and Michael Cudlitz) as they try to raise eight sons. In the first episode, favoured eldest son Lawrence announces that he’s quitting the seminary to go off, “find himself” and “save the world”.

Two years after Worthy farm’s last all-star music festival, Jo Whiley, Lauren Laverne, Clara Amfo, Mark Radcliffe and Edith Bowman are set to report from different positions around the site on all the stories and action so far. There will be performances from British pop soul singer Jorja Smith, Spanish superstar Rosalia, and Tyneside’s own tunesmith Sam Fender. Later in the evening, Whiley, Amfo and Huw Stephens present live coverage of the headlining set from Stormzy. And at the close of play, Radcliffe and Bowman catch up on events at the John Peel, Park and West Holts stages with headline sets from the likes of Interpol, Jon Hopkins and Cat Power.

Lauren Laverne and Clara Amfo present the Pyramid Stage debut of Janet Jackson, who will perform hits from her back catalogue including What Have You Done for Me Lately?, Rhythm Nation and Got Til It’s Gone. There will also be highlights of the sets by Norway’s young breakout star Sigrid and Detroit pop-rapper Lizzo with songs from her third album Cuz I Love You. Plus: an acoustic performance from rising star Freya Ridings. The coverage continues at 9 with the full headline set from The Killers and highlights of Liam Gallagher.

This documentary originally aired on the BBC to mark the 70th anniversary of the liberation of the concentration camp by Soviet forces in January 1945. Laurence Rees travals to Jerusalem, Chicago, London, Bavaria, Krakow and Tel Aviv to talk to six survivors, along with their friends and families, who discuss their problems, challenges and triumphs since the end of the second World War.

Kylie at Glastonbury 2019
Sunday, BBC1, 6pm
Many assumed Kylie Minogue would be a one-hit wonder when the former Neighbours star first broke into the charts with I Should Be So Lucky in 1988. How wrong they were. Minogue has spent three decades spinning around as the queen of pop. Now, 14 years after she was originally due to debut at Worthy Farm, Kylie finally takes to the stage at Glastonbury for what promises to be one of the sets of the festival. It’s introduced by Lauren Laverne and Clara Amfo, and the show also has highlights from Miley Cyrus and Koffee’s performances.

Sue Barker is New York-bound to help celebrate the 60th birthday of one of tennis’s most famous characters along with friends, family, and singer-songwriter wife Patty Smyth. In the 1980s, the tennis ace courted controversy as he behaved like a spoiled brat yelling at a Wimbledon umpire. His outcries were sent up by Roger Kitter, aka The Brat, whose song Chalk Dust – The Umpire Strikes Back was a surprise hit. It remains to be seen whether that makes an appearance here, but we can reveal that Barker attends one of John’s jamming sessions, and his friend Chrissie Hynde discusses his passion for music. Plus there’s a look at McEnroe other great passion: art.