The Big DIY Challenge: PJ Gallagher pulls it together faster than a Billy bookcase

Review: The new show is a feat of cost-effective execution 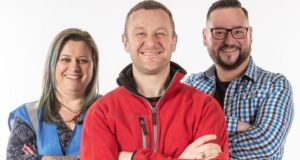 The Big DIY Challenge (RTÉ One, Tuesday, 8.30pm), as the name might suggest, is a project requiring some self-assembly. In answer to a callout from March, some of the nation’s fixer-uppers have turned their efforts at redecking, shed building and kitchen or bathroom refurbishments into a vague sort of competition.

Their undertakings are adjudicated remotely by two judges, Jennifer Byrne and Michal Dachowski, who occasionally spring up in the corner of the screen to shout out much-belated advice. “No loose hair or clothing!” they yell at the recording of one enthusiast who comes close to drilling her long tresses into her plumbing.

Each job must be completed in 10 days, standing to win a cash prize of €10,000 from the programme’s sponsor, the supply store Woodie’s. Given some of the grand designs on display, that seems less like a bid for glory than a modest dream of reimbursement.

The show itself, though, is a feat of cost-effective execution, devised by the company that brought you Operation Transformation and The Restaurant. Such a portfolio suggests they love any project with a tight deadline, which may explain why The Big DIY Challenge itself seems to have come together faster than a Billy bookcase.

There’s something to be said for such swiftness. When the comedian PJ Gallagher, the show’s jovial inspector, gets to have a go on a digger, he quips, “I’ll be back in a minute, just running up to the ATM.”

Not everyone is a master of timing. One experienced DIYer, Rachael from Cavan, attempts a complete bathroom transformation while her three children have chicken pox, she struggles through her own illness, prepares for a sister’s wedding to attend, and displays all the signs of exhaustion. “I’ve had two hours of sleep,” she says, “but I’m going to get it done.” That is not a DIY project. That is a cry for help.

Later cutting corners, to the useless objections of our insert-picture judges, Rachael’s project blows the deadline by three full days. It looks all the better for it. More admirable, in fact, than the frictionless achievement of one decking project, on which no one will slip, or the elegant “She Shed” constructed with blokey technique – “How can you not like painting with fire?”.

It’s understandable that one impeccable kitchen fit-out, which repurposes a school’s old parquet floor as a gleaming new countertop, sets the highest bar. But I preferred how its maker subtly shared the credit. “Fair play to you,” said Paul’s wife and adviser, Mary, “you’re a genius.” “No,” he said, “we’re a genius.” It’s hard to disagree with that evaluation – even if they do it themselves.