TV guide: 11 of the best shows to watch this week

The Magdalenes have their day in moving documentary, while Martina Navratilova continues debate on transgender athletes and Glastonbury gets off to a roaring start 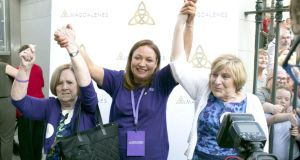 Norah Casey (centre) with Mary Merritt and Elizabeth Coppin in Coming Home – When Dublin Honoured the Magdalenes, Tuesday on RTÉ One

The £1 Houses: Britain’s Cheapest Street
Monday, Channel 4, 8.30pm
The series is back for a second run with the same format: Liverpool City Council is selling off derelict houses for £1 each, and first-time buyers must invest thousands of their own cash to renovate a derelict property. They have 12 months to get the abodes in shape or the council will take it back – with no compensation. We see Debbie and Ste planning their dream kitchen. After 12 months of living in a nearly empty street, childhood sweethearts Mel and Rob are questioning their decision, and expectant mum Ibby ignores the crumbling walls of her nightmare house in her quest for the ideal abode.

Afternoon BBC dramas are usually light-hearted offerings like Shakespeare and Hathaway, Doctors and Father Brown. However, occasionally viewers are treated to something more serious, and this new offering starring Hugo Speer should offer a welcome helping of grit to the usual servings of post-lunch telly meringue. In episode one, a cruelly displayed corpse leads an elite murder investigation squad to questionable decisions and concern over a deeper mystery. Sharon Small, Bailey Patrick and Tori Allen-Martin also star.

David Olusoga takes a look at covert government documents to reveal how the “Windrush Scandal” and the “hostile environment” for black British immigrants was seven decades in the making. Settled here legally since childhood, contributors Sarah O’Connor, Anthony Bryan and Judy Griffith were re-classified as illegal immigrants by new hostile environment regulations. They lost jobs, savings and their health because they were unable to show proof of their nationality status, and faced deportation back to countries they could barely remember. Olusoga reveals how the first Windrush generation were Commonwealth citizens, many of them ex-servicemen, coming to rebuild war-torn Britain. Yet even before arriving, the government viewed them with hostility.

Coming Home – When Dublin Honoured the Magdalenes
Tuesday, RTÉ One, 7pm
On the evening of June 5th, 2018, a number of coaches turned onto Dublin’s Dawson Street to be greeted by cheers and adulation from a waiting crowd. These weren’t returning sports heroes, but a group of unsung heroines who were finally getting their long-deserved day in the sun. Coming Home – When Dublin Honoured the Magdalenes is an uplifting documentary recounting that special day, when survivors of the notorious Magdalene laundries were celebrated with a special evening of song and spoken word at the Mansion House, and received an official apology from President Michael D Higgins for the wrong done to them all those years ago. The survivers are in their 70s, 80s and 90s now, and nothing will make up for the hurt and cruelty inflicted on them in the workhouses. But this two-day celebration, which began with a visit to Áras an Uachtaráin earlier that day and ended with a special performance of Riverdance the next night, was a small gesture of national atonement. The documentary features interviews with some of the Magdalenes, including Elizabeth Coppin, Deirdre Cadwell, Elizabeth (Anne) O’Dwyer and Delia Hanney, along with observations from Higgins, the event’s organiser, Norah Casey, and some of the musicians who provided entertainment over the two days, including Christy Moore and Hothouse Flowers.

Drag SOS
Tuesday, Channel 4, 10pm
In this new makeover show, drag collective the Family Gorgeous make a road trip across the country, transforming unlikely folks into drag-enhanced versions of themselves to unlock their lost confidence and inspire them to change their lives. In this first episode, the team meets three hesitant new recruits in Dover. Costume expert Liquorice Black meets Nico (21), who’s been wearing the same black, baggy clothes since suffering mental health problems at university. Lill and Tete Bang are determined to help single mum Abby discover her inner drag-diva and make her family proud. We also meet Shaun (55) who has been nominated to take part by his son, Owen. No doubt Anna Phylactic (probably not her real name) will offer some fabulous advice.

For many years the greyhound racing industry has been dogged by allegations of doping, race-fixing and ill-treatment of the animals. The state of Florida is considering a ban on greyhound racing, while in Ireland there have been cases of dogs testing positive for cocaine and even Viagra, and there have been ongoing animal welfare issues in an industry that costs the Irish taxpayer millions. There was not much information on this documentary at the time of going to print, but the RTÉ Investigates team promises to go behind the “glitz and the glamour” to uncover what’s really going on at your local dog track.

The Trans Women Athlete Dispute with Martina Navratilova
Wednesday, BBC1, 9pm
Earlier this year, Martina Navratilova called for an open debate about transgender women competing in women’s sports. In this documentary, the tennis legend opens up the discussion and answers some of her own questions by meeting athletes, trans women, scientists and sporting officials. She meets Naomi, a trans woman at the beginning of her transition who wants to be able to continue to play football. Naomi discusses the problems she has dealt with, and how important sport is to her. Martina is very supportive of the inclusion of trans women in amateur sports, but is concerned about the possible physical advantages that trans women may have over female athletes in competitions.

Exhibitionists: Road to the RHA
Thursday, RTÉ One, 10.15pm

Who wouldn’t want to have their artworks put on display at the Royal Hibernian Academy’s annual exhibition? For Irish artists, its a red letter day on the calendar, when both professionals and amateurs can hang side by side in this prestigious institution. In this programme, we meet seven artists who hope their work gets chosen, including former drug dealer Brian O’Rourke, who learned to paint in prison; Connemara artist Mo West, who has just been accepted into Aosdána at the age of 92; Aishling Hennessey, who suffers from depression and says she paints to survive; and Dingle sculptor Mick Davis, whose work made from recycled bicycle parts can be seen in Game of Thrones.

With Liam Gallagher set to wow the masses at Glastonbury, this documentary is the latest to look back at the singer’s stormy relationship with his brother Noel. A perfect chance to reflect on clips of their days in Oasis and their more recent solo careers. Alan McGee and Tim Abbott from Creation Records are among the talking heads, along with fellow Mancunian music legend Shaun Ryder. Why is the siblings’ rivalry so intense, and what would it take for them to re-form as Oasis?

Glastonbury 2019
Friday, BBC2, 9.50pm
Two years after Worthy farm’s last all-star music festival, Jo Whiley, Lauren Laverne, Clara Amfo, Mark Radcliffe and Edith Bowman are set to report from different positions around the site on all the stories and action so far. There will be performances from British pop soul singer Jorja Smith, Spanish superstar Rosalia, and Tyneside’s own tunesmith Sam Fender. Later in the evening, Whiley, Amfo and Huw Stephens present live coverage of the headlining set from Stormzy. And at the close of play, Radcliffe and Bowman catch up on events at the John Peel, Park and West Holts stages with headline sets from the likes of Interpol, Jon Hopkins and Cat Power.

The Kids Are Alright
Friday, RTÉ One, 7.30pm
This good-natured US series, set in California in 1972, follows an Irish Catholic family and struggles of the conservative working class parents (played by Mary McCormack and Michael Cudlitz) as they try to raise eight sons. In the first episode, favoured eldest son Lawrence announces that he’s quitting the seminary to go off, “find himself” and “save the world”.