Who would have thought the British upper classes would be so thoughtless of their neighbours? 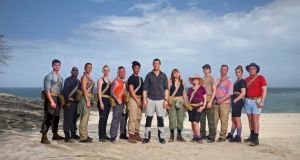 The contestants in Treasure Island with Bear Grylls

Every year, probably because Britain doesn’t have a written constitution, Bear Grylls is given a number of British citizens to do with what he will.

So what are you going to do with your votive offering this year, Bear?

Admittedly the ursine barbecuist doesn’t have much of an imagination. He does this every year. But there is a bit of a twist this time. “The modern world is driven by a hunger for money, but in a survival situation does it hold any value?” asks Bear. “In the next six weeks bundles of cash will be dropped across this brutal paradise.”

Bear does not go with them to the island. He’s probably staying nearby inside the carcass of a goat or in a cabin built with the bones of former islanders. Instead, we see him on a landing craft becoming aroused by his own evocation of the hardships ahead. He is dressed in a neat black shirt and cargo pants (so called for they contain precious cargo: Bear Grylls’s buttocks) and not, as you might imagine him – covered in warpaint, swigging from a bottle of his own fluids and wearing the skin of a weaker man. He’s gone soft.

The opening montage, presumably culled from across the whole series, or possibly just your last birthday party, shows us footage of people running, weeping, vomiting and, without context, saying the following things:

“I need to take as much as I can from this island.”

And, most magically, “I have a poo in my pants.”

This, I think you’ll agree, is also Brexit in four lines.

Then we are introduced to this season’s most desperate money-hungry survivalists, who are swiftly left ashore as helicopters pass overhead and drop packages filled with money across the island. As you might imagine, this crack team was specially chosen for the specialist survivalist skills that will be required. They include Marco, a former marine, Mano, a doctor and 75-year-old Irene, a retired florist. Although it’s probably best not to get too attached, my favourite islander is double-glazing salesman Ben, who says “I’m going to use my experience in sales to a maximum” and is one of the few honest enough to announce that he does not intend to share any of the money if he finds it.

I don’t think he is going to find any money. I don’t think he’s going to survive the night. But I am still impressed with his can-do spirit. Within 10 minutes he’s drinking from a bottle of his own urine. He really does this and he does it well before it’s remotely necessary. “Looks like piss, smells like piss, tastes like heaven,” he says, demonstrating that he should really work in drinks advertising if the island’s society ever becomes sophisticated enough to have a drinks industry.

The islanders also include 55-year-old Ivar, who is a real-life aristocrat and a cousin of Prince Philip. He is nice and friendly and everyone likes him. This is smart. If I’ve learned anything from life it’s this: always trust posh people. They have definitely got to where they are by being kind and thinking of the greater good. As one of Britain’s ruling class, Ivar is also one of the few with the secret of “fire” and sets about setting one at the first opportunity.

There’s a bit of a discussion early on that amounts to a political debate about whether the strong should help the weak and whether any discoveries of cash piles should be hoarded or distributed. There is a general consensus that everyone likes good things and hates bad things and then they slide inevitably into autocracy. “We do need a strong leader and I think we’ve got that in Marco,” says a nurse called Cat.

Who would have thought the British upper classes would be so thoughtless of the welfare of their neighbours?

Marco, the former marine, has proven himself by taking his top off and dead-lifting a tree trunk. Sadly, his torso is all deformed and bumpy and not smooth and egg-shaped like mine. Then Marco takes Ivar and Elissa to go seek fresh water. Elissa is a writer and therefore we can assume that she is the most qualified and capable person in the group (You know the way we writers are). So I hold my breath waiting to see what amazing thing she’s going to do. She dislocates her knee on some rocks. Frankly, it’s not the best outcome. Marco and Ivar leave her to die.

A few miles on Ivar spots a parachute in the trees and points it out to Marco. “F*** a duck!” says Marco, no doubt predicting a future in which he lives alone on the island with a duck. (Later, he tells Ivar, “my mother is married to a chick” which suggest that there’s a family precedent).

They cut the £15,000 package down from the tree and then we get to watch absolute power corrupt in real time. Marco and Ivar, both of whom previously spoke about sharing all discoveries with the group, talk each other into hiding the money and maybe, possibly, sharing it at some more appropriate future date. The next day, buoyed up by their own lies, they pretend to go seek water for their increasingly dehydrated tribe but instead go on the trail of another package of £20,000, which they also hide. I suspect that by episode two they will be burying an islandmate while winking cheekily at the camera. (What goes on on the island, stays on the island!)

Nobody else is any the wiser. “Does everyone more or less have a job?” says Marco, which is basically what the ESRI do, before abandoning his scurvy and rickets-addled team-mates in favour of self-enrichment and, eventually, poultry love.

I suppose I’d have expected this of him, a military man, but as for Ivar, the cousin of Prince Philip, I am shocked. Who would have thought the British upper classes would be so thoughtless of the welfare of their neighbours? Certainly not me, an Irishman, in Ireland.

When they’re gone, Mano, a literal and figurative brain surgeon, acts like a real leader, finding fresh water and pineapples and generally being selfless and funny and kind. However, Mano is a skilled middle-aged man of colour and not a hunky ripped military type or public school-educated aristocrat surfing a bottomless well of superficial charm, and so is not permitted to rule. Anyway, I know it’s only one episode in but I’m pretty sure I know the twist. Bear Grylls’s Treasure Island, a cruel, under-resourced nation with occasional windfalls for its most callous citizens? Why it was Britain all along!