Patrick Freyne: Baz Ashmawy would starve to death in minutes without the people of rural Ireland 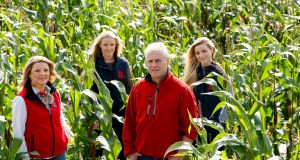 On Monday’s Big Week on the Farm: Harvest (RTÉ1, Monday to Thursday) I watch two hair stylists giving a makeover to some cows. “It’s finally happening,” I say. “Rural Ireland is having a full-on nervous breakdown.”

My wife rushes in, because, as a member of the metropolitan elite grown fat on the labour of the rural working man, she has long been expecting this moment. “We probably should have been nicer to rural Ireland,” she admits, as Aine Lawlor surveys the work of the hairstylists.

The cows are named Bella and Red Hot Diamond (coincidentally the names of my siblings) and they don’t look hugely different after they’ve been rigorously shampooed and combed. “Call that a makeover,” I say, remembering the cow-makeovers of my youth. “That cow’s not even wearing makeup.”

For this series, RTÉ has dispatched some of its least effete employees to the terrifying outlands beyond the airport that we culchies call, “Almost Dublin, north” (Meath) to hang out on a farm.

Sorry vegetarians, potatoes are a meat. Why the hell do you think chips taste so nice?

As a cosmopolitanised-culchie I get myself in the mood by swigging from a two-litre bottle of TK red lemonade while gazing at the blueprints for an out-of-town business park and thumbing through a copy of Bungalow Bliss.

Most of the RTÉ crew are out of shot, but occasionally you can see the shadow of the cameraman’s pith helmet or the soundman’s cigarette holder or the director’s parasol. In front of the camera, at least, we get the excellent Áine Lawlor and Ella McSweeney who appear to understand Meath’s humble country ways.

Here are some things that happen over the course of the first episode:

We follow a barley farmer as he calculates whether to harvest his barley immediately or risk a crop-damaging downpour. Then we follow him to see if he gets a good price for his crop. This is a form of erotica for half the nation and they watch clutching a calculator in their mitts.

A conservationist discusses how he spends his days tagging roseate tern chicks on Rockabill island, one of the only places in Europe where these feathery flakes deign to lay their eggs. This is the sort of information you couldn’t reveal to Irish people ten years ago (or indeed two months hence) for fear we’d all float out on driftwood to eat the eggs and cover the island with decking and hot tubs.

Baz Ashmawy arrives in order to manoeuvre a tractor around an obstacle course while being encouraged and rebuked by his mother, who is sitting up with him in the cab. This you will recognise as the classic metaphor “the Irish condition”. It’s why, if you know your Freud or your Engels, the Irish are immune to both psychotherapy and revolutionary socialism (isn’t that right, Mam?).

However, Lawlor refers to this segment as “the Tractor Factor” and it’s set up as a challenge whereby Ashmawy must use his tractor to, for example, pick up a pallet with some barrels of water on it. He demonstrates, in the process, that he has the weak arm muscles and poor depth perception of a city boy who would starve to death in minutes without the good people of rural Ireland.

There’s also a bit where the host farmers Ivan and Frances Curran show us how potatoes are harvested using huge big harvest machine things of the kind Michael Davitt used to drive. I repress a snigger.

They are, of course, pulling a fast one on the naïve Dubliner eejits for just out of shot are fields filled with Mr Tayto herds from whose ripe, pinstriped bodies real potatoes are culled. Sorry vegetarians, potatoes are a meat. Why the hell do you think chips taste so nice?

And there’s also a bit where a man gives a vasectomy to some “teaser rams”. This is a reminder that RTÉ is a public service broadcaster who will show us things that nobody in their right mind would actually chose to watch (unless of course they focus-grouped this and found “ram vasectomies” were hugely popular with the 18 to 35 demographic. It’s possible. Millennials are weird).

These “teaser rams” (a real term, apparently) are non-fertile sheep hunks whose job it is to get ewes in the mood for loving. The “teaser rams” play seductive soul music and throw red scarves over the sheep’s bedside lamps before running off to write emotional screeds on their Rams’ Rights blogs.

Then the real rams arrive – the straight-to-business no smalltalk rams. They are very hunky indeed. We watch some sheep sex for a while, which is, I suppose, a beautiful thing and some of the farmers discuss ovine love technique as we watch. “What he lacks for in finesse he makes up for in energy,” says one of them.

I have faith in the national broadcaster. I guess I still believe in magic

All over Dublin, people turn the television off and sit motionless in the dark for a while. The rest of us wink involuntarily at the telly and spit chewing tobacco into our empty cans of Lilt.

Over the course of the week we also get mad agri-scientists, lovely nature, the disgusting wonder of cowbirth, Kevin Dundon barbecuing burgers that are, terrifyingly, “more than meets the eye”, nonagenarian jam makers and more celebrity tractor crimes. Excellent work, Big Week on the Farm.

Meanwhile in the fleshpots of Dublin, the occult witch man Keith Barry has a whole show (The Keith Barry Experience, RTÉ1, Wednesday) in which he confuses and terrifies minor celebrities. It’s one of those programmes where the studio audience stands around pretending to have a good time (you know – like TFI Friday, Top Gear and “life”) despite the fact Barry’s dark practices are an abomination and an affront to nature.

He whispers the third secret of Fatima to model Thalia Heffernan, shows Eamon Dunphy a photograph of hell and tells snooker player Ken Doherty the exact hour and place of his death (he actually largely does nifty card tricks, but everyone is nonetheless freaked out).

Then he psychologically tortures Dancing with the Stars judge Julian Benson by making him pick between four doors. What’s special about these doors? Well, behind one of them stands Barry himself, but whenever Benson chooses a door, a huge hammer swings forward and smashes it, and potentially Barry, into shattered bits. I can’t understand why Barry has this dangerous device just lying around the studio.

Benson, like all good celebrities, is content to risk manslaughter in the cause of light entertainment but luckily he chooses the doors that do not have Barry on the other side and so is not in prison now. Sure, says you. Like, RTÉ would really risk the possibility that Julian Benson from Dancing with the Stars would accidentally kill the mentalist Keith Barry with a giant hammer.

But just reread that magnificent scenario. That was totally a risk worth taking. I have faith in the national broadcaster. I guess I still believe in magic.