The Virtues takes us back in time, to dark happenings in 1980s Louth

Review: A startling drama from the director of This is England has a shadowy Irish storyline 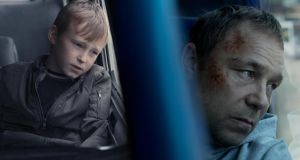 Chekhov once called for drama to be as naturalistic as possible by drawing one poignant example. “People eat their dinner, just eat their dinner,” he wrote, “and all the time their happiness is taking form, and their lives are falling apart.”

Very early in Shane Meadows’ slow-burning and startlingly naturalistic new drama, The Virtues (Channel 4, Wednesday, 9pm), we watch something like that exact scene.

Around the table, three adults and a child mutter anticipation and appreciation for a meal, while their relationship becomes gradually apparent. The figure you first take for an uncle or family friend, quiet and brittle, is actually the boy’s father, visiting his ex and her amiable new partner. But this is something like a last supper.

The following day they are leaving Sheffield on a long haul flight to start over. The father, Joe (the extraordinary Stephen Graham), will hold his emotions at bay, even as he encourages his son to call the other man “dad”.

But for a moment at the table it seems that he might collapse, inconsolable. All the time his happiness is being demolished and his life is falling apart.

“You’re not gonna…” his ex enquires, as Joe leaves. “No,” he says, “I’ll be fine.” With an economy of words – so few you half imagine Meadows and his co-writer Jack Thorne’s took turns on the delete key – but an abundance of character, it is quite clear that Joe will not be fine.

Only three things happen in the first episode of The Virtues – that dinner, Joe’s later gregarious, self-annihilating bender, and his final boarding of a ferry bound for Belfast.

Directed by Meadows, who lets Joe’s unresolved memories bubble to the surface in grainy shots of 1980s Ireland, and gives sequences a queasy, blurry motion, like a lapsed alcoholic trying to focus, this is hard to watch and somehow quite hypnotic, like seeing the Trials of Job in real time.

With such suffering, coupled with that title (itself stylised in the credits with a crucifix), you might expect a heavy religious dimension to Meadows’ new drama. Indeed, much to his son’s embarrassment, Joe keeps calling his phone app Skype-Lord by mistake, as though unconsciously struggling for a greater connection.

Instead, he is driven to return to Ireland, where he was orphaned, and from which he soon fled, abandoning more than his brutal boy’s school.

Inspired by Meadows’ own childhood trauma, just recently – and very carefully – confronted, Joe’s journey moves similarly, with caution and gentleness. It may surprise fans of Meadows’ This is England that we encounter so few brutes among so much damage. (Even one moronically officious ferry-ticket clerk is distinguished, amusingly, by his strained politeness.)

But Meadows’ experience is that peeling back layers of time and denial can be electrifying enough, aided with a sinewy, mood-enhancing score by PJ Harvey.

It says something about the series’ remarkably unhurried pace, unlike anything else currently on the screen, that by the end of the first episode most of the cast still await us in the fictitious town of Ballybraigh, in Louth (where Helen Behan, Niamh Algar and Mark O’Halloran portray characters just as detailed, with their own affecting struggles).

And it says something about the show’s absorbing tone – downbeat but not despondent – and Graham’s magnificent central performance, that you’re perfectly willing to wait.

Patience, after all, is one of the virtues, and this show will reward it.