Game of Thrones has descended into bumbling spectacle and senseless plots

Opinion: Daenerys Targaryen has lost the plot, and so has Game of Thrones 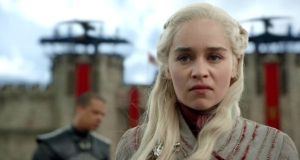 Daenerys went mad this week – but has Game of Thrones lost the plot alongside her? That was the question many viewers will have asked after an action-packed yet confusing and often logic-defying penultimate episode of the HBO fantasy blockbuster.

As was in hindsight inevitable, the Mother of Dragons conquered King’s Landing with minimum fuss and maximum devastation.

Yet, in keeping with the series’s descent into bumbling spectacle, the showdown between Daenerys and the Lannisters found a way to be horribly complicated, to say nothing of raising more imponderables than it answered.

Here are a few.

Last week it took just three shots from sweary space-pirate Euron Greyjoy and, boom, down went Rhaegal the dragon. Yet at King’s Landing all the Scorpion crossbows in Westeros could not trouble Daenerys and Drogon as they flew from out of the sun and scorched all before them. Why was former deadshot Euron so easily blindsided? And what would Daenerys have done had the weather been overcast and there was no sun from which to dive?

2: How did Jaime get through the Northern lines and into the city?

The Kingslayer was captured trying to sneak into King’s Landing, where for reasons that made absolutely no sense given recent events in his life – Brienne – he was determined to reunite with Cersei.

Yet, having bagged a top Lannister, the Unsullied thought nothing of leaving him alone with his brother Tyrion (who commanded them to abandon their posts – nothing iffy going on there).

Jaime, once freed, was able to effortlessly make his way into the city. How? There was no downside for Tyrion either. Daenerys had warned that if he failed her again he was toast (literally). Yet, despite being the one who originally delivered the news of Jaime’s apprehension, Daenerys seemed unconcerned that Tyrion had set free this potentially invaluable hostage.

3: Had Euron really dreamed of killing Jaime all along?

As anyone who remembers the siege of Pyke will attest, the Lannisters and the Greyjoys have a complicated history (well not that complicated – Jaime helped violently crush a Greyjoy rebellion decades ago).

Yet that doesn’t really explain Euron’s sudden, never previously articulated, desire to dispatch the Kingslayer when they accidentally bumped into each other on the beach.

“I’m the man who killed Jaime Lannister, ” croaked Euron as he died, putting the seal on the least foreshadowed character arc ever.

4: How did the “Master of Whispers” become the least circumspect person in the Seven Kingdoms?

It’s one thing to stand up for what you believe in. It’s quite another to talk your way to the executioner’s block. But that is what Varys, once the greatest power-player in Westeros, achieved as he penned letter after letter to potential backers of Jon as king.

He doubled down on his death wish by blurting out his support for the Warden of the North the moment Jon arrived at Dragonstone. The Master of Whispers really should have learned to keep his voice down.

5: Why didn’t Arya and the Hound talk about their plans earlier?

Despite spending a fortnight travelling from Winterfell to King’s Landing, Arya and Sandor Clegane had apparently never discussed her determination to kill Cersei. Only as the Red Keep collapsed, did the Hound think to mention to Arya what a terrible idea it would for her to go after the queen.

Flee, he said, lest she lose herself in her thirst for vengeance. And then off he set to duel with the brother against whom he bore a childhood grudge. Moreover, given her shape-shifting training with the Faceless Men, why had Arya baldly stated her name arriving at Daenerys’ camp – and why did the guards let her through without a second thought?

6: Where did all the Dothraki come from?

Some of us wish the Battle of Winterfell episode was just a bad dream. However, one concrete fact that emerged from that dark, muddled instalment was that the Dothraki were wiped out.

“What they’re seeing is the end of the Dothraki, essentially,” explained showrunner David Benioff of the sequence in which Jon and Daenerys watch the charging cavalry consumed by the legions of the dead.

“The end of the Dothraki, essentially” sounds reasonably definitive. So how was it that seemingly hundreds of the steppe warriors were available to Daenerys at King’s Landing – and that they once again led the charge, despite having been annihilated when executing the same strategy a fortnight earlier?

7: Why did the bells drive Daenerys insane?

Yes it was a difficult week for the Mother of Dragons. Her boyfriend/nephew/potential usurper wasn’t up for a snog, and one of her top advisers considered her the personification of evil (and was apparently trying to poison her).

Nonetheless, Daenerys has been through a lot worse: indentured marriage to a Dothraki warlord, those lost years in Meereen, having one of her dragon children resurrected as a zombie. And yet, all it took in the end was a chiming surrender bell for her to pivot from well-intentioned ruler to eyes-on-stalks scorcher of all she surveyed. Why so angry, Mad Queen?

8: Why didn’t Daenerys just fly to the Red Keep and torch Cersei?

Okay so, Daenerys had flipped and wanted revenge. All she had to do was fly straight to the Red Keep, where her nemesis – the woman who had ordered the beheading of Missandei – was enjoying a cheeky afternoon wine and taking in the sights.

So why spend the next 40 minutes blasting the rest of the city while the castle stood untouched? The idea that Daenerys would wish to take out her anger on the ordinary people, in particular, makes no sense – through her long journey across Essos she has always stood up for the weak and helpless, even when this put her in conflict with the ruling elite.

Also, why had Cersei placed all the Scorpions crossbows on the outer walls of the city yet left the Red Keep completely defenceless?

9: What was the Golden Company doing?

Despite allegedly being the most spiffing mercenary force in Westeros or Essos, it took mere minutes for the Golden Company to be sliced and diced by Daenerys’s Dothraki hordes. This made for spectacular television – but you can’t help wonder if Harry Strickland and his crew were really worth the queen’s ransom Cersei had paid for them. The regular Lannister forces put up a far more respectable fight.

The Master of Whispers / shoutiest conspirator in Westeros has been banging on about Daenerys’s unsuitably as ruler for some time now. Yet out of the blue Tyrion decided to betray his old friend, knowing it would lead to Varys’s summary execution. Were these the actions of a rational individual?

Or had Tyrion, like so many of our GoT favourites, fallen under the sway of the great god of plot contrivance?