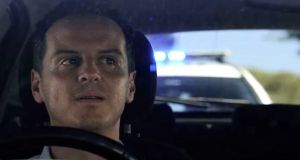 The star-studded fifth series of the science fiction anthology programme will consist of three standalone episodes and will debut on Netflix on June 5th.

The trailer, teased on Twitter with the warning “you should’ve seen it coming”, has glimpses of the new series, starting with Sherlock and Fleabag star Scott becoming incensed at people around him using their phones.

It cuts to a clip of him in a car with a gun, enraged, as police surround him.

At one point, he yells: “Everywhere you look people are hooked on the things.”

Cyrus is seen portraying a disillusioned pop star who has 20,000 fans to keep entertained at a concert.

Avengers: Endgame actor Mackie’s storyline appears to be relating to a relationship, and there are also other clips showing a robot doll giving a teenage girl support, as she has no friends.

The words “love, privacy, connection, sex, family, work and afterlife” flash up throughout the trailer.

The dystopian yet often darkly comic series, which takes a scathing look at modern society and alternative realities often relating to the overuse of technology, was created by Charlie Brooker and debuted in 2011 on Channel 4.

The programme moved to streaming giant Netflix in 2016.

The latest episode of Black Mirror was a standalone interactive feature-length film called Bandersnatch, starring Will Poulter and Fionn Whitehead, allowing viewers to choose the fate of the protagonist Stefan. – PA