‘Part of me wants to say, shut the f**k up, Louis Theroux’ 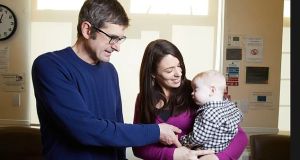 Louis Theroux may be sympathetic, but he is a film-maker, not a mental health professional

There are many reasons for postnatal depression, the despair that one in five women experience after giving birth. One factor is the vast discrepancy between expectations of motherhood and experience of it: between what they feel and what they are told to feel.

For the most part in Louis Theroux: Mothers on the Edge (BBC Two, Sunday, 9pm) – a programme on mothers and babies in psychiatric treatment, and one that is more sensitive than its title – the documentary automaton listens respectfully to some harrowing stories.

But, given that he clearly recognises that their problems can often be exacerbated by paternalistic interference, to see him later commandeer one woman’s counselling session (“Can I just chip in a tiny bit?”) is clumsy at best, and deeply unethical at worst.

Discussing something that affects women exclusively, with people in vulnerable states, is hardly the time to start mansplaining.

Maybe Theroux can’t help but get involved – on-camera fumbling has always been his brand – and here his own parental instincts are to the fore.

In Bethlem Hospital’s mother and baby unit, he plays with the infants, changes nappies (“I know what I’m doing, yeah. Willy’s pointing down.”) and even interviews a six-month old.

“Hello, how old are you?” he asks. But Jake isn’t talking.

Nor is one mother, Barbara, a Spanish woman still in the tail end of a distressing psychotic episode, whose husband speaks for her instead in unfortunately broken English. “Her brain snap,” he says, “or sort of broke.”

In Catherine, though, we find a patient far more willing to contribute, and while other documentaries might have proceeded with caution for that reason, she quickly becomes the focus of this one.

“I don’t want to sound naive,” Theroux tells her, “but I would never have known you were unwell.”

Catherine, who attempted suicide just the previous week, is used to performing for the camera, though. A young businesswoman with a history of self-harm, she tells us that even her Instagram represents a vast gulf between image and reality.

There, picture-perfect images of her newborn in rainbow colours make cryptic allusions to private anguish. A so-called “rainbow baby” is one born after a tragedy, in Catherine’s case a pregnancy terminated for medical reasons.

Does she feel joy to be with her son now? “In all honesty, I don’t,” she says. “He deserves better than me.”

For those unacquainted with mental-health issues, such feelings may sound unnatural, but the truth is that they are not uncommon.

Another woman, Lisa, who experienced a psychotic episode and paranoid delusions, is asked to name her biggest fear. “That I’m not going to be good enough for my family,” she says.

Theroux may be sympathetic, but he is a film-maker, not a mental health professional. When Catherine, recently diagnosed with an emotionally unstable personality disorder, consults with a developmental psychologist, Theroux bewilderingly chooses to “chip in”.

“You need to grow the feelings enough to get well,” he tells her, as Catherine agrees. “There’s a part of me that wants to say, I think you do love him.”

There’s a part of me that wants to say, shut the f**k up, Louis, and that part gets harder to resist when, shortly after Theroux’s further encouragement and following a difficult spell at home, Catherine absconds from hospital and takes another overdose.

Found by police later in a hotel, and treated in hospital, Catherine makes huge progress by the episode’s end, as do all the mothers featured.

Does Louis? “Recovery is a case of not pushing too fast and recognising how much is realistic,” he explains.

Wise words, Louis, and equally good advice for a documentary maker too.