Review: Some of the show’s subtlest characters – and biggest overactors – spoke their last lines 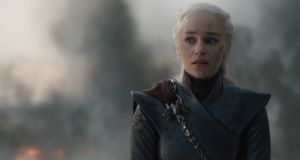 This article contains spoilers for Game of Thrones, season eight, episodes one to five.

Let’s start with a major spoiler and, even at this late stage, quite a Game changer. Is there even an Iron Throne any more?

The prelude to the storming of King’s Landing, realised in the penultimate episode of Game of Thrones as a sinisterly apocalyptic vision, suggested that the odds between opposing sides would be roughly even.

The seat of the conniving Cersei Lannister and the last holdout of unbended knees to Daenerys Targaryen, now Mother of Dragon (singular), was buttressed by a human shield of unloved civilians, fortified by the Gold Company’s mercenary army, defended from sea by the Iron Fleet and guided, it seemed, by a heavily signalled cunningly nasty plan.

Directed by Miguel Sapochnik, whom GoT has made something of an apocalypse auteur, the episode is a standout for how it manages to flip its own tokens of devastation

Well, the Fleet was incinerated by Drogon, who has learnt to fly tactically, the quivering Gold Company got similarly smelted, Cersei appears to have had no cunning plan at all, and as for the civilians… Are you sitting down?

Who could have seen this unrestrained carnage coming, besides absolutely everybody watching? Step up Varys, whose long-standing loyalty to Queen Dany had begun to subside under clear signs of her unfitness to rule, and news of a worthier contender.

“Every time a Targaryen is born,” he counselled Jon, his new pick, “the gods toss a coin and the world holds its breath.”

When Tyrion reveals this disloyalty to an ashen Dany (she has not been taking things well), Varys’s coin comes down tails, and Drogon, the firing squad, does not hold his breath. It’s a noble death for Conleth Hill’s terrific sneak, dignified to the end, who tells his betraying pal, Tyrion, “I hope I’m wrong” – with the stately confidence of someone who knows the rest of the episode will prove him right.

What was the strangely trusting Tyrion thinking? That, too, David Benioff and DB Weiss’s scripts make abundantly clear: Dany really does want “a better world” rather than to set it on fire.

But Dany, who has lost two dragon children, her protector Ser Jorah and her confidante Missandei, and now her lover/rival/nephew Jon, is quite brittle and fully loaded.

“Far more people in Westeros love you than love me,” complains the Mother of Dragon(s), the Unburnt, Breaker of Chains and Flaunter of CVs. “All right, then,” she says when Jon retreats from her embrace, “Let it be fear.”

Let’s pause for a moment to consider what has happened to Dany, once held up, reasonably seriously, as a feminist icon. That unhinged wrath is in her genes has been hinted at for some time. (Her father, the Mad King, was ousted for his own tyranny, and it’s hard to maintain a healthy frame of mind when your mother was also your aunt.)

Still, to see her astride Drogon as the bells of Kings Landing peal with surrender, her face drawn from days of not sleeping, not eating and not countenancing treachery, is to watch a fateful coin toss settled for the worse.

Directed by Miguel Sapochnik, whom GoT has made something of an apocalypse auteur, the episode is a standout for how it manages to flip its own tokens of devastation: first with the adrenaline rush of fire and fury, then with the horrified shame of ash and blood.

Incinerated domes, crumbling stone and a calcified embrace make grim visual references to Hiroshima and Pompei. These are heavy allusions for a fantasy series

For all the significant characters who here met their ends, this episode arguably belonged to its extras, filmed from street level, sharply distinguished, and giving flesh-and-blood consequence to what ought to be tried as Westerosi war crimes.

(Spare a thought, too, for Laura Elphinstone, the character actor who fumbled an investigation on Line of Duty last Sunday, became exposed to Chernobyl’s nuclear fallout on Tuesday, and was last night forced to shepherd her child through the destruction of King’s Landing. It has been a rough week.)

Incinerated domes, crumbling stone and, in one heartbreaking reveal, a calcified embrace make grim visual references to Hiroshima and Pompei. These are heavy allusions for a fantasy series.

It’s not the only way the episode brings this vast battle – in reality a cruel display of awesome power – down to human level. The Hound and Arya, the show’s finest double act, touchingly take their last bow together, with his appeal to her not to be consumed by revenge, even as he submits to it.

This battle between brothers was not so much to the death but beyond it, and it was long fated: If the Mountain will not come the Hound, the Hound must go to the Mountain. Either way, they both go out together, while Qyburn, quite satisfyingly, goes to the wall.

Who would have thought it possible to feel some compassion for two other fated siblings, each professed dead this episode while still drawing breath?

I used to think that Lena Headley did too little as Cersei to be given much acclaim. Now I think she deserves it for the same reason. Look at her summon a single teardrop as King’s Landing is levelled, a more impressive effect than the eerie demolition of each castle turret. Even the writing on the wall starts to crumble.

Although fatally wounded by the frontman of Metallica, Euron Greyjoy – who dies, as he lived, with villainous overacting – Jaime is reunited with Cersei, his sister lover, in the Map Room, where last they met, with its territories now cracking into pieces.

After so many murders, lost children and one very controversial rape, the “hateful” twins die in each other’s arms. The things they did for love.

What else remains? No, really. What?

The apparently indestructible Arya may be the sole survivor of King’s Landing, and if she really has sworn off revenge, I’m not sure marrying Lord Gendry will be a fulfilling alternative.

How will a horrified and repulsed Jon, who otherwise proved to be a big bag of useless this episode, greet Dany when she finally dismounts her inexhaustible and inextinguishable dragon?

Is it even possible to find a just ruler in this world of rubble? We have one episode to find out. Then it’s Game over.

One ping after another: Why we all need a notification detox
6