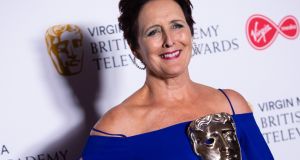 Fiona Shaw who won best supporting actress at the TV Baftas for her role in Killing Eve. Photograph: Matt Crossick/PA

The BBC’s spythriller Killing Eve has triumphed at the TV Baftas, picking up three awards including a first Bafta for Irish actor Fiona Shaw, with its star Jodie Comer sheding tears as she was named best actress.

Comer (26), who played assassin Villanelle in the hit thriller, shook off her cold, screen alter-ego to turn on the “waterworks” on stage. She beat co-star Sandra Oh – who plays the operative on a mission to catch her – to the gong.

“Thank you so much,” Comer said. “Sorry I’m the only one who’s turned on the waterworks.” She dedicated the award to her grandmother, saying: “Nana Frances sadly passed away on the first week of filming. She’d say ‘you get it off me you know’. I want to say ‘Nana Frances, you were absolutely right all along’.”

Fiona Shaw picked up her first Bafta when she was named best supporting actress for playing spy boss Carolyn Martens. She she also paid tribute to Waller-Bridge and her “glass-shattering genius and wayward imagination”. She said the role had been “probably the greatest pleasure of my life”.

Waller-Bridge said: “I can’t speak it’s so unbelievably exciting”. She added: “Thanks for everyone for taking risks. Jodie Comer almost swallowed a wasp in Tuscany.”

I’m A Celebrity... Get Me Out Of Here and Britain’s Got Talent also picked up prizes, despite Ant McPartlin taking time out from both series last year. I’m A Celebrity won the reality prize while Britain’s Got Talent won best entertainment show. Co-host of both programmes Declan Donnelly said he was keeping his Bafta-winning shows “warm” for McPartlin until his co-star was ready to return to TV.

McPartlin persuaded Willoughby – who co-hosted the recent series of I’m a Celebrity – to get on stage at the Royal Festival Hall. Donnelly said: “Thank you Holly for helping me out last year. You did a fantastic job standing in for Ant, who has reluctantly come up here tonight.” McPartlin jokingly waved as Donnelly added: “He’s still part of the team as well.”

Killing Eve went into the awards leading the nominations, but not without controversy. Bafta’s rules say a programme must have premiered in the UK to be eligible, but the show first aired in the US on BBC America before coming to the UK. Bafta said there was “significant creative contribution from key UK talent throughout the production” and “the television committee is the arbiter of all eligibility”.

Bodyguard had been its main opposition, but it had to make do with one gong — the only award voted for by viewers — Virgin Media’s must-see moment.

It claimed the prize for the death of Julia Montague (Keeley Hawes) in an explosion in the BBC One drama.

The moment when Eve (Oh) stabs Villanelle (Comer) in Killing Eve, the Doctor Who episode on Rosa Parks, Peter Kay’s Car Share, The finale, and Queer Eye were all up for the award.

Benedict Cumberbatch won the leading actor award for his role as Patrick Melrose in the Sky Atlantic drama of the same name. The actor, who received his first Bafta nomination in 2005, told the audience: “Oh gosh, I think I’m going to fall over, I’m very used to being a bridesmaid not the bride.

“I’ll keep it short because everyone probably does need to go to the bathroom.

Backstage, he said: “I really thought Hugh Grant was going to win.”

On stage, Cumberbatch paid tribute to his wife, saying: “You’re my rock, I had to go pretty weird for this one and it was nice to come home and feel stable again.

Comedian Steve Coogan presented the award for leading actress. He quipped: “When I was asked to present the leading actress award I was delighted because of course women are quite fashionable at the moment... I realise this is the last award of the night so will keep this shorter than originally planned... scroll down autocue.

Piers Morgan’s hopes of a win were dashed by Cambridge Analytica Uncovered (Channel 4), which triumphed in the news coverage category. A camera panned to the Good Morning Britain presenter looking unimpressed.

Good Morning Britain had two nominations, for On A Knife Edge and its Thomas Markle exclusive.

Programme-makers thanked the undercover reporter who exposed Cambridge Analytica uses of personal data. “We couldn’t have done it without him – or her,” they said. “Facebook are saying they are doing what they can to protect people’s data ... we still await to see if that’s the case.”

The actor was unable to attend the ceremony, with the award collected on his behalf by director Stephen Frears.

The Royal Wedding: Prince Harry And Meghan Markle lost out in the live event category.

The Royal British Legion Festival Of Remembrance, also on BBC One, won the gong.

Huw Edwards, who presented the programme, paid tribute to the “true heroes who won the award, that generation of men and women”.

The drama was based on the true story of Jerome Rogers from south London, who took his own life at the age of 20 after accruing mounting debts sparked initially by traffic fines while working a zero-hours job. Programme-makers criticised bailiffs, calling them “organised gangs extorting money from people who haven’t got it”.

Mr Rogers’s brother, speaking on stage, criticised the “gig economy in our nation” and the “unregulated bailiff industry” leading a “young man to take his own life before he reaches his own 21st birthday”.

The Bros documentary lost out to Suffragettes With Lucy Worsley for specialist factual programme.

Steve Pemberton won best male performance in a comedy programme for Inside No 9. – PA