‘The Border counties are etched in Eugene McCabe’s soul’

Allan Cubitt on adapting, ‘Death and Nightingales’, the writer’s 1992 novel, for TV 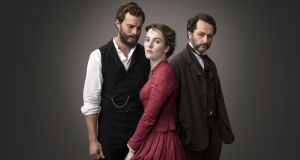 When the writer and director Allan Cubitt finished the last series of The Fall, the BBC serial killer thriller set in Belfast, he asked himself what he wanted most to do next. The answer to his question - a period drama based on Eugene McCabe’s 1992 novel Death and Nightingales, set in rural Fermanagh in 1885 - might seem like a radical departure from the brutal contemporary world of The Fall. But it turns out that there are several underlying connections between the two productions.

The central action of Death and Nightingales is contained within a 24 hour period: the 23rd birthday of Beth Winters (played by Ann Skelly), stepdaughter of Protestant landowner Billy Winters (Matthew Rhys). This is the day on which Beth plans to escape the drunken, “unfatherly” attentions of her stepfather and escape to a new life of freedom, together with the gruff, seductive - and secretly insurrectionary - Liam Ward (Jamie Dornan), a Catholic tenant on Billy’s land. The curious title is a reference to Keats’ poem Ode to a Nightingale.

“Death and Nightingales is paced like a thriller, but that’s not what it is,” says Cubitt. “It’s a classic of modern Irish literature, packed with great detail. Eugene’s writing is full of feeling, there’s a huge heart present in his work, but at the same time he turns a brave, bleak eye on his world. He allows his characters to be ugly and beautiful simultaneously.

“And his dialogue is exceptional. It reminds me a bit of Synge, and the Playboy of the Western World: he understands register and idiom, the dialogue sings, all the time. This was the big challenge for me, in inventing dialogue and scenes: what would Eugene do? I tried to match my idiom with his, and I hope I stayed faithful to the material as well as answering the demands of dramatisation. The power of his writing made me stick to the book and bring it to the screen. It’s a story about betrayal and treachery that cuts across class and gender and politics.”

When Cubitt was criticised for graphic depictions of male violence against women in The Fall, he responded that, far from indulging in misogyny, he regarded The Fall as a feminist drama. Similarly, he sees Death and Nightingales as inherently feminist in nature.

“It places a strong and complex female character, Beth, at its centre. In line with her nineteenth century situation, she is trapped by circumstances. She is trying to take control but she’s trapped by her lack of employment and independent means. Her attempt to get out is both powerful and profound.”

Cubitt says that Beth is pursuing the great theme of the nineteenth century: how to choose the right person to love. “She has a choice between two men [Billy, her stepfather, and Liam, her lover], neither of whom are suitable for her.”

Another element of continuity between The Fall and Death and Nightingales is the cross-over of cast and crew, particularly the presence of Jamie Dornan, who played the serial murderer Paul Spector in The Fall.

“I always thought that Jamie would make a great Liam Ward,” says Cubitt. “It plays to his obvious strengths: he’s good-looking, intriguing, and hard to pigeon-hole - you’re always trying to read him.”

In a recent BBC interview, Belfast-born Dornan spoke of his delight in returning home to take on the role: “This is the part of the world I’m from and I want to showcase it and they will continue to write very intriguing stories from here, whether they’re versions of things that already exist in our history or they’re contemporary original stories. This is a great breeding ground for drama in this country and if I can keep supporting that throughout my career I’d love to keep working here.”

Cubitt says he’s grateful to Dornan for introducing him to the young actor Ann Skelly. “Ann was a revelation to me. Such a delightful, under-stated person, but she unleashes such powerful emotional truth on camera. I was just sitting at the monitor, gob-smacked by what she was doing. I presented Jamie through The Fall, and hopefully that will also work well with Ann.”

He also has high praise for Matthew Rhys, as Billy Winters. “Eugene drew him as benign in some senses, a landlord committed to the land and place - at times reasonably enlightened, at other times an out and out bigot. Matthew got the mixture of charm and he was unafraid to make himself ugly.”

McCabe himself, now in his late 80s, still lives with his wife Margo on the farm on the Monaghan/Fermanagh border where he wrote Death and Nightingales. “Eugene and I corresponded quite a lot, me writing from Norfolk to him in Monaghan,” says Cubitt. “I’d tell him when the snowdrops were out, and then the primroses. The Irish climate always seems to be a few weeks behind. Towards the end of The Fall, I made a pilgrimage to see him and Margo. He’s not in the best of health, so sadly he wasn’t able to visit us later on set, which he would have enjoyed. My thanks to Eugene are contained within the piece.”

In an interview for a 2009 RTÉ radio documentary, McCabe said that Death and Nightingales was “a metaphor for everything that’s happened since 1610 until now. It’s a metaphor about conquest and those who are subjected to it.”

He spoke of the feeling that “no matter how colonists behave, the people who are colonised feel that they are entitled to do anything they like to those that have colonised and abused them.”

It was the compelling political dimension of the novel that prompted producer Jonathan Cavendish to buy the rights to it 25 years ago. “This is a story about Ireland - the tragedy of the origins story of Northern Ireland in the nineteenth century,” he says.

The first film that Cavendish produced was a 1991 adaptation of Sam Hanna Bell’s novel, December Bride, set in Co Down in 1909. “When I was in Ireland doing December Bride, 30 years ago, I thought - this problem is soluble. They are the most friendly and wonderful people from whatever side of the religious divide they come from, and there’s enough land, enough opportunities. I think that now is a good time to look at the foundation stones of the twentieth century political crisis, and the foolish situations that politicians put people into.”

Cavendish had always intended to produce Death and Nightingales as a film, and that was still the plan when his old friend Allan Cubitt came on board. “For many, many years I tried to make it work as a movie,” says Cavendish. “The action is set over one day, and we wanted to keep that structure because it’s so exciting - but within that structure there are lots of flashbacks, which give it such texture and meaning. Well, when we brought it to TV, all our difficulties fell away.”

The three-episode drama is a BBC/RTE co-production. Cavendish first worked with Cubitt on an earlier BBC/RTE television series, in 1995, called The Hanging Gale, which was set in 1846, at the beginning of the Famine. “It was a story about four brothers who were thrown off their land, and they were actually played by the four McGann brothers [Joe, Paul, Mark and Stephen]. It won many awards, and I saw what a great writer Allan is. So then he goes off and does The Fall, and then about five years ago, we decide to do Death and Nightingales together, still as a movie - before we saw the logic of TV. Allan writes so truthfully of the past. He has a rare gift: he’s a brilliant interpreter of material as well as a creator. And of course now he knows Northern Ireland very well indeed.”

“The border counties are etched in Eugene McCabe’s soul,” says Cubitt. “And he explores the Protestant/Catholic divide in such an even-handed, non-polemical way. There is great moral complexity in his characters. He often writes about people who don’t want to hate but are pushed to do it in some way.

“Beth, in particular, comes on a big journey to the position she reaches at the end. Traditionally, people call a happy ending an American ending, and a tragic ending a Russian ending. But what McCabe gives us is a complex ending to a complex story. He is an extraordinary writer.”

Death and Nightingales begins on Monday at 10.35pm on RTÉ One and on Wednesday at 9pm on BBC Two

‘We are the weirdoes, mister’: Why women love witches
8