US lecturer receives more than 50,000 tweets a year meant for the British retailer

Twitter UK have released an alternative Christmas ad starring John Lewis, a US college lecturer who receives over 50,000 tweets a year meant for the UK retailer of the same name due to his @johnlewis Twitter handle. Video: Twitter UK 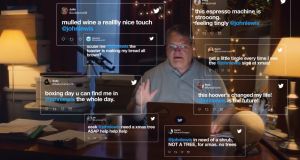 The “real” John Lewis: the US academic receives 50,000 tweets a year meant for the British department--store chain

Every year the frenzy around John Lewis’s Christmas ad results in an American lecturer with the same name as the department-store chain being mistakenly inundated with thousands of tweets. This year he stars in his own Christmas ad.

Twitter has paid for the “real” John Lewis, who receives more than 50,000 tweets a year meant for the British retailer – and who points out on his Twitter feed that he is not a retail store – to appear in a tongue-in-cheek ad playing on the case of mistaken identity.

Lewis, who is a computer-science lecturer at Virginia Tech university, has had the Twitter handle @johnlewis since 2007. He has said that the retail store, which uses @jlandpartners as its official corporate presence on the social-media platform, has never offered to buy it from him. Lewis has about 50,000 Twitter followers, more than double the number who follow the official John Lewis customer-service Twitter feed.

I've got a truck you can borrow but the fuel costs will be ridiculous. @jlandpartners https://t.co/jl4bz698LR

“I think it’s hilarious that people mistake me for the UK store, and I do my best to direct them to the right place,” Lewis says. “I see a massive spike in tweets at this time of year, and I always watch the John Lewis advert, especially as it becomes a big part of my conversation.”

Lewis, who lives in Blacksburg, Virginia – which the ad points out is 3,683 miles, or 5,927km, from the UK – has become something of a cult figure for his good-natured and witty responses to many of the tweets he receives.

The British Twitter ad pays homage to recent John Lewis Christmas ads; eagle-eyed viewers might spot a telescope, a miniature moon ornament, Monty the penguin and Buster the boxer. Twitter has branded the campaign #NotARetailStore in a nod to the comment on Lewis’s profile.

Lewis says he didn’t actually use Twitter for a couple of years after signing up and that it was mistaken for the UK store that galvanised him into becoming a regular user. – Guardian

The Books Quiz: Who wrote the famous line: ‘Hell is – other people!’
8