Detective Pikachu looks like a smash – solve that mystery

The memeing of life: One of the silliest ideas ever committed to film is going to be big 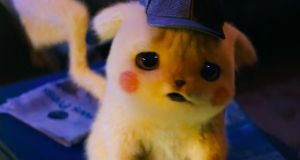 Detective Pikachu: we may be looking at an honest-to-God smash

Hollywood has a long and storied history of making high-concept movies, that is to say, films with (usually outlandish) premises that can be easily described in a short sentence. Some are even describable with their own taglines.

Were you to pithily describe David Lynch’s 1988 surrealist short, The Cowboy and The Frenchman, you might fall short. Meanwhile, “Schwarzenegger and DeVito are Twins” does the job for another film that came out the same year.

Nowadays, of course, “high concept” isn’t an entirely neutral descriptor, since it is near-exclusively used to describe terrible films, often flops that sum up, in some way, the vapid inanity of Hollywood – Kangaroo Jack, The Emoji Movie, everything Adam Sandler has been in since 1999 – the sort of barrel-scraping ideas that can be described in one sentence, and thus are clearly not worth your time.

Which brings us to the internet’s undeniable cinematic obsession of the week, Detective Pikachu; a movie with a premise and title so ludicrous it’s hard to believe it’s not a heavy-handed Saturday Night Live sketch.

And yet, it has instantaneously become one of the most anticipated movies of the year.

The combination of a high-concept plot and dumb title can sometimes work to the advantage of a canny producer. A film project named Venom – no, not that one – was rewritten several times and turned down by more than 30 studios in 1995. Only once it was retitled Snakes on a Plane did it become one of the first box-office successes that gained its notoriety from internet meme culture in 2006.

This, the first live-action outing for the Pokémon franchise, appears to be pulling off the same trick. The title character is voiced by sentient smirk Ryan Reynolds. The film is drawn from the offbeat video game of the same name, and is set within a world in which Pokémon are real, and also crimes happen.

In just 24 hours, the trailer amassed more than a hundred million views across multiple platforms, and a million more reactions vids, memes and long overdubs substituting Reynolds’ voice with other performers such as Alex Jones and, fittingly, high-concept king himself Danny DeVito.

It’s always hard to extrapolate profitability solely from internet buzz, but considering its trailer already has four times the view count of the Toy Story 4 teaser that came out the day before, we may be looking at an honest-to-God smash hit drawn from one of the silliest ideas ever committed to the internet, let alone shot on 35mm film.

Hedging such a huge bet on such a ludicrous premise is a risky gamble, but there are only so many viewers willing to put their money where their mouths are, so you gotta catch ’em all.