Hold the maggots: can ‘I’m a Celebrity’ survive the vegan era? 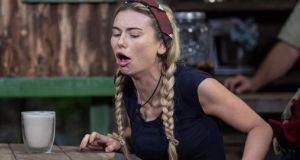 I’m a Celebrity Get Me Out of Here: the Made in Chelsea star Georgia Toffolo found one of last year’s bushtucker trials hard to stomach. Photograph: ITV

As fun as I’m a Celebrity Get Me Out of Here! is for audiences – really, who doesn’t like seeing someone you vaguely recognise from EastEnders scream in mortal terror night after night? – it seems as if some of the contestants have started to wise up.

Three of the ITV jungle-challenge show’s intake this year – the X Factor runner-up Fleur East, The Vamps’ James McVey and the Coronation Street actor Sair Khan – are all said to be vegan, and will therefore not be participating in any of the challenges requiring them to eat piles and piles of live insects.

Most of the time, contestants are forced to live on a diet of beans and rice, with the occasional challenge involving offal. So what happens if you sling a kangaroo bum under Nick’s nose? Would that count as part of his 5 per cent?

Inevitably, the public is less than impressed by what it sees as dietary cowardice. But this isn’t the first time dietary requirements have risked derailing I’m a Celebrity. In 2002 two contestants, the radio DJ Tony Blackburn and the magician Uri Geller, were vegetarian, but their approaches differed wildly.

One week in, the public voted for Geller to eat live maggots. Blackburn said he would lose all respect for Geller if he went through with it. Geller ate them anyway, prioritising the spirit of the competition above his own ethical viewpoint. Blackburn, meanwhile, refused to eat bugs and ended up winning the series. The message? Either people respect those who stick to their principles, or they just really dislike Uri Geller.

For years I’m a Celebrity has made its name by covering people in snakes and forcing them to eat insects, but perhaps its new conscientious contestants are a sign that times are changing and people are now unable to stomach the cruelty inherent in some of its challenges. Maybe next year contestants will be forced to eat piles of tofu instead. – Guardian