Podcasts: Cariad Lloyd interviews celebs about losing a loved one. It’s far from a downer 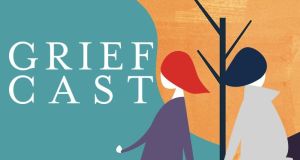 A few weeks ago, I covered a podcast called Death in the Afternoon, hosted by funeral directors and experts in the business and cultural history of dying and bereavement. Griefcast, hosted by comic Cariad Lloyd, is a far more intimate examination of grief and loss. Lloyd interviews a person – usually a fellow comedian – about a person close to them who has died. She lost her father when she was 15, which is the central thesis of this podcast: it’s a project about normalising conversations around death. This year, it won in three major categories at the British Podcast Awards and it’s very clear why.

I had been tiptoeing around this podcast for a while, aware of Lloyd as a comedian and gifted improviser, but had been unsettled at the idea of listening to two people dig into a conversation about death in such a personal capacity. Podcasts are already a very intimate medium, and this kind of intimate conversation seemed a long way from the peripheral. However, I am so glad I took the leap – Griefcast has made its way swiftly into my top podcasts of the year. I haven’t been able to stop listening.

This doesn’t come from a voyeurism, necessarily, which may seem hard to believe given the fact that each episode is an hour-ish long interview about loss. Rather, there is something hugely philosophical about each conversation, some wisdom imparted about the horror – and mundanity – of death. Every subject handles it differently, and Lloyd conducts the interviews with huge grace. She is the other person in the conversation, for sure, and acts as a very powerful conduit for conversations that cannot be absolutely easy for the subject, no matter how much levity they conduct themselves with.

The episodes I started with were interviews with Aisling Bea, Adam Buxton and Ana Matronic, all of whom had lost their fathers. Buxton is serene and gentle in his discussions of losing his father – this interview was given only months after his passing. Ana Matronic is a powerful storyteller; her father died of Aids when she was 15, and her episode is a portrait of the late 1980s in America, but also about how stigma operates.

My recommendation as a starting point is Aisling Bea’s episode, which is raw and angry and extremely real. I was floored by the integrity and honesty Bea brought to the interview regarding her father’s death – and her admittance that some days she just didn’t want to talk about it, but she was going to talk about it anyway.

Not only are the stories that the interview subjects dispense important, but the manner in which they dispense them is fascinating too. I cannot stress, either, how none of the episodes I have listened to so far have been downers, or left me feeling distressed. Certainly they are emotional listens at times, but there is an ease to the atmosphere Lloyd creates and facilitates here – which in many regards is a deeply courageous thing to do, as a person who has suffered a loss. She offers hers simply and honestly at the beginning of every episode – her dad died when she was 15 – and sets the tone that this next hour is a place for big, big chats.

I wholly recommend this as a listen, whether or not you have experienced the death of someone close to you. It is one of those rare pieces that, without ego or self-congratulation, examines a vital component of the human condition.