Aim of ‘I’m a Celebrity’ 2018: Convince Dec he is still hilarious without Ant 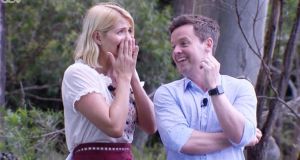 “I’ve never done it with a girl before,” Dec Donnelly says to new co-host Holly Willoughby

Standing by the edge of a cliff that looms 100 metres above the verdant rainforest of New South Wales, one of the newest contestants of I’m a Celebrity Get Me Out of Here (Virgin Media One, Sunday, 9pm) calmly assesses the immediate risk.

The first task of the new series is to shimmy out over this precipice along a spindly metal structure, while stretching into the void to fish flags from a clothesline. The safety net is that they are television personalities. “They won’t let us die,” soap star Sair Khan tells sci-fi star John Barrowman.

Khan may laugh over her first introduction that, “I’m most afraid of you guys!” But to see another soap star, Rita Simons, urgently checking with Barrowman, “You know who I am, don’t you?”, is to see that she has good cause.

In the meantime, one of the show’s most recognisable celebrities has disappeared. Earlier this year, Ant McPartlin resolved to concentrate on his recovery from addiction and forgo presenting duties. That leaves Dec Donnelly, his professional life partner, feeling exposed. “I’ve never done it with a girl before,” Donnelly says to new co-host Holly Willoughby, and his words cause an eruption of laughter off camera, as all of Dec’s words must.

For all the biting reptiles, physical exertions and taking sustenance from measly provisions, the most arduous task on I’m a Celebrity is to assure Dec that he is hilarious. Willoughby, for her part, is not allowed to try.

The structure of the show, thus far, seems designed to sow division. Assembled gradually, two teams compete for a more salubrious camp, casting them routinely as “winners” and “losers”. (Imagine what that does to the brittle egos of the people who would participate.)

Either by design or accident, it results in a huge gender imbalance, creating one almost entirely female team, bar the boyish musician James McVey, the other all male, bar the canny Khan.

The effect, however, is to galvanise co-operation within both teams. In tasks, they are supportive, tactful and encouraging. Outside the tasks, they are the same, swimming to the assistance of the rival team at one demoralising point, or later rallying around Anne Hegerty, the game show star, who has Asperger’s, when she becomes distressed by her new environment.

That, to judge from Twitter, was not the first reaction of the audience, who had gathered to mock unhappy and hungry celebs, to ruthlessly appraise Willoughby’s performance, or generally cheer for the abyss. One young contestant, Emily Atack, who – like McVey, or Malique Thompson-Dwyer – had grown up watching the show, imagines this venture as a rite of passage: “If I survive something like this,” she tells us, “I can survive going into adulthood.”

What does it say about the maturity of her watchers, then, that this self-professed ’fraidy cat was the first person the public selected to be thrown into a vipers’ nest? (And by no means metaphorically.)

“I can’t watch this!” yelped Willoughby at the prospect. That may be sound advice. Let’s get out of here.

Colin Farrell: ‘LA is superficial, but you get that in Dublin too’
7

Bruce Springsteen at 70: 13 surprising facts about ‘The Boss’
10