They are ‘caught in a time warp between the Tricolour and Union Jack’, says the Newstalk host 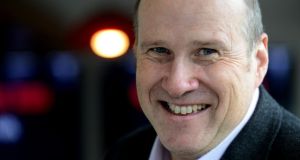 Ivan Yates: once Northerners 'get out of their time warp they’re welcome to join a united Ireland'. Photograph: Cyril Byrne

During the dark days of the Troubles a piece of archetypally Northern graffiti could be spotted in the grimy toilet of a Belfast pub. “No Pope here”, read the scrawl, to which some wag had added, “Lucky old Pope”. Ivan Yates, for one, would probably agree with the latter sentiment.

With old divisions again looming following the DUP’s rejection of a Brexit Border deal, the host of The Hard Shoulder (Newstalk, weekdays) is keen to reject the sectarian bigotry that still lurks in the North. As a Protestant who grew up in the once rigidly Catholic Republic, Yates says he has “a certain insight” into problems caused by religious differences. Accordingly, he is a firm believer in parity of esteem when it comes to Northerners. He dislikes them all equally.

On Monday’s show, as he listens to Henry McKean’s vox pop from Belfast, Yates signals he has had enough of tribalism. “My tolerance of Nordies both sides of the sectarian divide is limited enough,” he says with a sigh. “They are still caught in this time warp between the Tricolour and Union Jack.” He finds it all offensive and “out of tune” with the pluralism he finds in the Republic.

When one texter calls the former Fine Gael minister a blueshirt who would deny equal rights to Northern Catholics, Yates clarifies his position. “You didn’t hear what I said,” he says impatiently. “I have no time for the sectarian Protestants in the North as well as for Nordies in general. One is as bad as the other.”

As is his wont, Yates is gleefully winding up listeners as much as expressing a considered opinion. Indeed, some of McKean’s interviewees on the loyalist Shankill Road aren’t unduly worried about playing up stereotypes. “We want a hard border,” says one woman straight from central casting. “We’re part of England, and the Irish should have nothing to do with us.”

Her voice rising to almost comical effect, the woman worries about “foreigners” travelling from the South and expresses dismay at the prospect of the Republic having a say on the Border. “We’re not part of them’uns,” she says, using the classic Belfast term of contempt for the other side, whichever one it may be.

Yates’s reaction is part hilarity, part awe. “No surrender,” he says, chuckling and adopting a bad Northern accent. “You can’t beat the intransigence of the most stubborn unionist on the Shankill Road.” But he also applies his analytical eye to such attitudes. “Behind all that bluster they’re actually like a rat in a corner threatened,” he says, suggesting that unionists worry that any diminution of their Britishness will put billions of pounds of UK funds at risk. Still, he’s perplexed that neither the DUP nor Sinn Féin will work to reach the “sweet spot” where the North gets the best out of the EU and the UK.

Yates returns to the theme on Wednesday, when he interviews the Fianna Fáil Senator Mark Daly about the possibility – and cost – of a united Ireland. Beyond the romantic appeal of the “fourth green field”, he wonders what practical benefit would accrue to the South, suggesting the costs would be exorbitant. But he’s just as worried about the additional tribal baggage. “Once they get out of their time warp they’re welcome to join a united Ireland,” Yates says. But his central objection remains: “The fact of the matter is, we don’t actually like the Nordies.” Again, it’s a mix of hard-headed realism and gleeful provocation; it wouldn’t be a surprise to see scribbles of “No Ivan here” on Belfast walls soon. One can guess what Yates’s reply would be, however.

The refund cheques prove to be yet another ill-judged move by Irish Water, an institution that seems to have a shotgun permanently trained on its own feet

Speaking of intractable problems, the issue of water charges just won’t go away, even when they’ve been given back. On Tuesday the dreary steeples of Irish Water emerge once again on Liveline (RTÉ Radio 1, weekdays), as callers tell Joe Duffy about difficulties with cheques refunding those who actually paid the charges.

According to Jonathan, a caller from Louth, neither post offices nor banks will cash the cheques unless the payee has an account, as his mother-in-law has discovered. And even opening an account proves impossible without the appropriate form of identity: the local bank refused to accept his mother-in-law’s new public services card as ID. Cue well-polished expressions of outrage from Duffy. “Not the super-duper, high-tech, highly publicised public-service card?” the host says, in mock disbelief.

The issue is simple of course: the cheques are crossed to ensure only the payee can lodge them. But it proves to be yet another ill-judged move by Irish Water, an institution that seems to have a shotgun permanently trained on its own feet. Duffy notes that the hapless semi-State organisation was happy to accept the charges in cash, and that older people are equally likely to have paid the bill but not to have an account. “Maybe we should check our privilege,” he remarks, noting that not everyone has a driving licence or a passport. By way of example he talks to Mary, who has obtained the latter document to open an account, even though she has never travelled abroad nor intends to.

The programme never works up a head of righteous steam but plods along as callers discuss the finer points of bank practice. Even Duffy’s well-honed sense of offence starts to drift. In a sign that he knows the topic has run its course he starts to ask listeners the bizarre question of whether they’d like to spend a weekend away with the DUP leader, Arlene Foster. Perhaps unsurprisingly, all demur at the idea. When it comes to “Nordies”, it seems, the Republic says no.

Moment of the Week: Gabriel Byrne speaks out

On Wednesday Gabriel Byrne appears on Today with Sean O’Rourke (RTÉ Radio 1, weekdays), where he addresses Hollywood’s sexual-abuse scandals and, less predictably, “the climate of abject sexism” in RTÉ during the 1970s. He recalls a “sex pest” who made his then girlfriend’s life “an absolute misery”, adding that such behaviour was so accepted that the idea of complaining to RTÉ “was never an option”. This silent attitude seems as shocking as the sexual harassment but underlines the bravery of the women who have recently spoken out against such behaviour, whatever the tiresome anti-PC brigade may mewl to the contrary. Byrne sounds genuinely offended by what he saw. He’s calling it out years later, but he’s still one of the good guys.