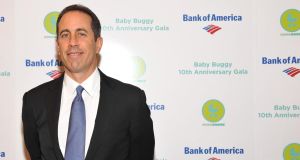 Netflix Inc has landed the global streaming rights for classic TV sitcom Seinfeld, the company said on Monday, bolstering its digital catalogue as it faces the loss of two popular series.

“All 180 episodes of the Emmy-Award winning Seinfeld are coming to Netflix – worldwide! – starting in 2021,” Netflix said on Twitter.

Netflix is poised to lose popular comedies Friends and The Office as the battle for streaming viewers intensifies.

Friends will move to AT&T Inc’s HBO Max in 2020, and The Office will go to a streaming service from Comcast Corp’s NBCUniversal in 2021. Seinfeld, a show starring comedian Jerry Seinfeld playing a version of himself, and which was often humorously described as a show about nothing, followed four self-absorbed friends in New York City. It was a hit on the NBC broadcast network in the 1990s.

The series currently streams on Walt Disney Co’s Hulu in a deal that runs through 2020. Sony Corp’s Sony Pictures Television, which owns the distribution rights to Seinfeld, reached the new agreement with Netflix. Terms were not disclosed. – Reuters