State of the Union: Chris O'Dowd and Rosamund Pike in a male fantasy of hurt

Review: O’Dowd and Pike are entertaining despite some stagy material from writer Nick Hornby 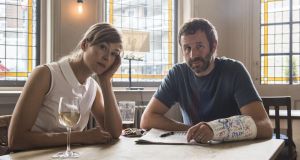 State of the Union: Rosamund Pike and Chris O’Dowd meet before marriage-counselling sessions to lob sotto-voce criticisms and recriminations over a pint of bitter and a glass of white wine. Photograph: Confession/BBC

Tom and Louise’s relationship is in terrible condition, but in State of the Union (BBC Two, Sunday, 11pm), they are at least still talking to each other.

Each week, in fact, they meet in a London pub for a hurried drink before attending marriage-counselling sessions, partly to sketch the terrain for the excruciating mediated conversation that awaits them, partly to lob sotto-voce criticisms and recriminations over a pint of bitter and a glass of white wine.

“You slept with someone else and now we’re here,” Tom says, putting the matter bluntly; Chris O’Dowd’s character, we learn across each 10-minute episode, is a fitfully employed music journalist who has lost his mojo.

“You stopped sleeping with me,” counters Rosamund Pike’s Louise, a doctor who trades more in ironic jabs than arias of hurt. “I can’t remember the last time we didn’t speak sarcastically to each other,” she says in a later episode.

Even in combustion they are suspiciously compatible, Tom forever the wounded party, Louise the only one making concessions

Here, though, sarcasm is what passes for middle-class frankness, where everything comes with a wry sense of detachment and, in Nick Hornby’s script, a stagy way with words. Seeing another couple emerge from the door of the couple’s therapy in comic dishevelment, Tom whispers, “They look like they’ve both been given a right counselling.”

If their marriage is on the skids, 15 years in and two kids deep, how can they be so good together? One reason is that they talk in exactly the same voice, as though Hornby is unconcerned about distinguishing the dialogue, a brisk dialectic of point, counterpoint, set-up, punchline. The other is that even in combustion they are suspiciously compatible, Tom forever the wounded party (in one episode literally), Louise the only one making concessions. In other words it sounds like a familiar and specifically male fantasy of hurt and heartache: High Infidelity.

Nor does it ring true to hear Tom compare their sessions to Brexit – “two years of talk before we even begin to agree what the issues are” – before admitting that he registered specially to vote for it.

“Who are you doing trade deals with?” Louise wonders. Oh, Louise. Too soon. That the sessions are unlikely to deliver them marital bliss is no surprise, but a withdrawal agreement seems even harder to imagine.

In the performances, at least, and in amusing thrust of their dialogue, they do seem better together.

Dancing With The Stars 2019: Jennifer Zamparelli and Nicky Byrne’s zero chemistry a turn-off
7

Food or War: Alarming take on future of humanity
9