‘In the North, nothing is ever exactly as it seems to be’

Clip from BBC series 'Spotlight On The Troubles: A Secret History' in which a young Martin McGuinness is filmed showing young boys a handgun and rifle from his car in Derry. The series reveals important new discoveries about the troubles. Video: BBC 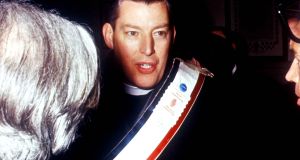 When you’re making a series of programmes about one of the most complicated and violently contested periods of the recent past, it’s important to tread very carefully. Every aspect will be forensically scrutinised, debated, and held to account, frisked for possible bias.

No doubt this is why the BBC’s Spotlight on the Troubles, the first episode of which was broadcast tonight, is subtitled “A Secret History”. “A” history, you note, not “the history”. The BBC is not claiming to offer the definitive, epoch-ending, last word on the subject of the Troubles. Who would be mad enough to do that?

Yet what Darragh MacIntyre presents, in this extended initial episode – which begins in 1966 and ends with the fall of the parliament of Northern Ireland in 1972 – is about as comprehensive, objective and meticulous an introduction to the conflict, and how it began, that it’s possible to imagine.

It’s an education, you might say, especially for younger generations who have no memory of the grim snow-balling of apparently disparate events that led to war.

The footage from that era, including rarely-seen archive material, seems to come from another world. It’s shot in grainy black and white, or in colour so murky that it looks as if people are moving underwater.

Out of the gloom strides a familiar figure: Ian Paisley. Not in his latter-day incarnation as the silver-haired Stormont statesman; this is Paisley the insurrectionary rabble-rouser, Paisley the sinister ideologue, bulky in his dark over-coat, looming head and shoulders above the chanting crowds.

In the film, a former senior army officer, David Hancock, claimed that police had shown him evidence that Paisley “financed” a UVF bombing in Kilkeel in 1969. The IRA was blamed for the explosion, but it emerged that the targeting of infrastructure was in fact part of a loyalist campaign intended to destabilise Terence O’Neill’s government. In the North, nothing is ever exactly as it seems to be.

That other avuncular Stormont leader, Martin McGuinness, appears as a tall, tousle-haired young man. In surreal footage, we see him handling weapons in his car, as a crowd of excited youngsters crane in at the window, eager for a glimpse of guns and bullets.

There’s also a piece of film from 1972 showing IRA members, apparently including McGuinness, assembling a car bomb, using a small sky-blue alarm clock as a timing device. Half an hour later a car-bomb went off in Derry. The number-plate, still intact among the twisted wreckage, is the crucial piece of evidence that proves it was the same car.

The programme’s other big revelation is that General Sir Michael Carver, the most senior officer in the British army at that time, proposed – in a top-secret document – that Britain “escape its commitment to the border”.

There’s historical shock value, no doubt, in Carver’s recommendation of a united Ireland. Yet what lingers in the mind after watching this secret history are not these previously concealed truths, piecemeal parts of a much broader narrative, but the awful inexorable march into the horror of the Troubles.