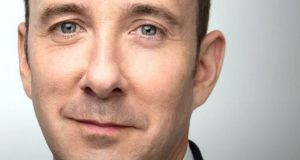 As Britain once again implodes into political chaos, Irish listeners must be starting to think that Sisyphus had it easy, so tortuously and fruitlessly familiar has the Brexit spectacle become. Yet amidst the endlessly looped arc of high dudgeon and farcical failure, there’s so much unpredictable drama in the UK’s efforts to leave the EU that audiences and presenters still flock back to witness the Brexit boulder being pushed up the mountain yet again, like a latter-day reimagining of the Greek legend, with the same futile results.

Shane Coleman certainly doesn’t sound like a man enduring punishment of mythic proportions when he broadcasts from Westminster on Newstalk Breakfast (weekdays). Rather, he sounds excited to have a front seat view as history unfolds, before it inevitably refolds once more. Actually, Coleman isn’t perched in Row A so much as straining to glimpse the action from the gods. As a visiting journalist from a foreign radio station, he unsurprisingly finds it hard to land ministerial exclusives, instead hosting brief chats with lesser-known figures such as Tory MP Greg Hands or phone conversations with journalist Philip Webster.

But at least Coleman has a ticket to the hottest show in town. Talking to Dublin-based co-anchor Kieran Cuddihy on Tuesday and Wednesday, he conveys a sense of the febrile atmosphere in London. His recordings outside the Houses of Parliament hear from ardent if sketchily-informed Brexiteers and from genteel Remainers attempting a lamely polite chant. (Moderate sentiments never got a terrace singing.) His encounter with broadcaster and writer Paul Mason on a protest march is low on detail, high on rhetoric – Mason speaks of an “insurgency” – but gives a vivid flavour of the political street theatre around him.

There are longer, more intriguing interviews too. Coleman talks to Belfast-born broadcaster Eamonn Holmes who, despite his long career in Britain, sees Brexit through the prism of his homeland. “As an Irishman, you worry,” he says. Holmes notes that despite the fuss about the backstop, Ireland rarely features in the debate. “If you don’t say we’re a very big part of this, nobody talks about it,” he says.

Coleman also interviews Stanley Johnson, father of British prime minister. A former European commissioner and unlikely reality TV star, Johnson snr comes across as a “nice man”, to quote Coleman. But he appears to share many of the biases and blind spots of his son, whose hardline approach he approves of. “Even from the Irish point of view, this is exactly the right road to go down,” Johnson says with counterintuitive chutzpah. In taking this route to secure parliamentary agreement, “Boris is doing his very best to avoid a no-deal Brexit”. Hmm.

Elsewhere, however, Johnson makes some cogent arguments while speaking fondly of his time alongside “Irish colleagues” in what was then the EEC. When Coleman gently reminds his guest of his remark to the effect that if the Irish want to shoot each other, they will do so, Johnson sounds a contrite note. “I’d like to apologise profoundly for saying that,” he says unhesitatingly.

But it’s a telling moment. There’s no reason to doubt the sincerity of Johnson’s apology, but it’s uncomfortably close to the faux-chastened schoolboy shtick his son can roll out after making falsely provocative claims, as well as underlining the cavalier attitude towards Ireland that runs through much of British political life.

Overall, Coleman’s week is considerably more successful than Boris Johnson’s, showing how a morning news show can use limited resources to resonant effect. It brings heft to Newstalk Breakfast, which can otherwise carry lightweight items on how parents should tell a child that they’re overweight. Moreover, it gives a lift to Coleman’s partnership with Cuddihy, which has developed a conventionally blokey dynamic compared to the former’s on-air duels with former co-host Paul Williams. As to the bigger picture, Cuddihy astutely sums things up. “All the momentous things that have happened in the last 48 hours are remarkable,” Cuddihy says, “but I’m not sure if anything is any clearer.” Time to put the shoulder to that boulder again.

Those seeking relief from Brexit should tune into the Ray D’Arcy Show (RTÉ Radio 1, weekdays), where the host at times seems to make it a personal challenge to find the most banal topics to riff on. On Wednesday, for instance, he spends several minutes musing whether aubergines should be placed in fruit bowls, before giving a wry chuckle as though having a moment of clarity on the inconsequentiality of it all.

That said, D’Arcy is also capable of escapist fare of a more enjoyable hue. Monday’s show, broadcast from Stamullen, Co Meath, is essentially an extended plug for RTÉ TV show Big Week On The Farm, but the presenter is in his element. As he drives local potato farmer Ivan Curran’s combine harvester, D’Arcy’s excitement is palpable, exclaiming he’ll never look at a packet of crisps the same way again. His excitement is infectious, turning what could be fluffy filler into joyous radio.

Those high spirits are short-lived, however. On Tuesday, D’Arcy talks to Dr Ebun Joseph, whose research reveals how hard it is for Africans to find jobs. Whereas less than 10 per cent of west Europeans are unemployed in Ireland, the figure is up to 60 per cent for Africans, including Irish citizens. It is, Joseph says, a “brain waste”, caused by what she diplomatically calls “group favouritism” among employers.

As Joseph explains how she tells her sons they have to work harder than Irish people because many Africans feel they’re perceived as “incompetent until proven competent”, D’Arcy sounds ever more embarrassed and, eventually, outraged. “Call it like it is, racism,” he says. “You can’t sugarcoat it.” As D’Arcy knows, it’s an alarming item. Ireland may yet have its own fresh tragedies in the making.

Radio Moment of the Week: Super Tubs saves the day

On Wednesday, Ryan Tubridy (RTÉ Radio 1, weekdays) remarks that “a peculiar little thing happened yesterday”. He was at the bottom of a non-functioning shopping centre escalator, when a mother lost her grip on the buggy containing her toddler. “I look up and all I see, hurtling down the escalator, is runaway baby,” says Tubridy, mock-dramatically. “I crouched, put my arms out and stopped the buggy in its tracks.” The presenter says if he hadn’t been there, “the baby would have been in a bit of pain”, but plays down his act: “I know this sounds like the most self-aggrandising story ever.” Still, despite his characteristic self-deprecation, he’s rightly pleased with his deed: “I went home, ironed my cape and put it away for another day.” Tubs mightn’t be a superhero, but happily, he’s faster than a speeding buggy.