Peaky Blinders: Is it all getting a bit ridiculous?

Series five, episode four recap: does all the sound and fury add up to much of anything? 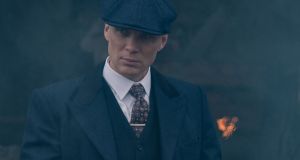 Like weddings in Westeros, parties in Peaky Blinders never end well. So was no surprise that Lizzie’s cocaine- and brandy-laced ballet gala culminated in high emotion, attempted murder and brutal death.

The sad demise was poor Linda’s as she forced her reckoning with Arthur only to be shot by Polly (conveniently just as Swan Lake’s Odette breathed her last in front of an amusingly less-than-rapt audience). It was a gloriously dramatic and entirely over-the-top ending to a beautifully shot episode that I thoroughly enjoyed watching, even though I have to acknowledge this season’s growing flaws.

Chief among them is that it’s hard to escape the idea that all we’re watching is so much stylish plate spinning. One of the great joys of Peaky Blinders has always been the way in which ever-whirring brain of Tommy Shelby (Cillian Murphy) is scheming behind the scenes only for the truth to be revealed at the last. However, there are only so many times you can go back to that well and there is an increasing sense that, even as the enemies keep multiplying, we have seen this all before.

And, for all that I enjoy the theatrical confrontations between Tommy and Mosley – and Murphy has been particularly good this series – and relish the faux-Shakespearian dialogue given to the various antagonists from Jimmy McCavern to Andrew Koji’s new arrival, Brilliant Chang, it’s also true that the show continues to walk a very fine line between thoroughly compelling and ludicrously self-parodic.

I still love watching Peaky Blinders because it’s the gaudy, over-stuffed drama of my dreams, but I understand those wondering if all that sound and fury adds up to much of anything.

The show does remain particularly good when concentrating on the way in which the carelessness of Polly’s “bold people” wrecks lives. From the increasingly terrified Billy Grade, out of his depth and desperate to quit the match-fixing game, to Linda, hurting and determined to end an evil she could no longer countenance, the true cost of involvement with the Peaky Blinders continues to be made desperately clear.

Would a bolder drama have seen Linda kill Arthur (who arguably was stepping forward to die anyway)? Possibly, but I bought Polly’s intervention. She has always been prepared to get blood on her hands for the family and knew that if someone didn’t pull the trigger then every part of the Shelby empire would begin to topple and fall.

It’s also arguable that this season has been partially about Polly’s reinvigorated sense of herself. Having suffered and survived the trials of previous seasons, she has come to terms with who and what she is and no longer appears particularly concerned about having to play by any of society’s rules.

That said, would Aberama really have put his great plans of murderous vengeance on hold for marriage? On balance, I felt yes, but only because Aidan Gillen sold both Aberama’s love for Polly and, more importantly, the respect he feels. The bigger question, of course, is why did Polly agree?

The obvious answer is that it concerns her son’s survival, although I’m beginning to wonder why. Gina clearly controls the brains in the relationship even if Michael might have a nice future in interior design.

In contrast to the society-denying Shelbys, Oswald Mosley remains very, very keen to remind everyone of the existing rules and whether one should play by them.

What I find interesting here is the question of just how many steps ahead or behind the politician might be. Is he so careless of the little people and so confident in his own perceived superiority as he slums it at a “gypsy party”, that he truly believes he has bent Tommy to his will? Or does he understand that far more is going on?

Sam Claflin’s ambiguous performance suggests either answer might be true. And while I have my doubts that a man as sharp as Mosley would so carelessly put his name to a piece of paper, it should also be noted that the gossip about his sleeping arrangements (which were revealed in letters from his second wife, Diana Mitford, donated to the National Library of Scotland) suggests a man who likes sailing close to the edge, who thinks consequences are for lesser mortals, and who doesn’t really believe he will be caught.

And what of that paper trail? Surely it’s not as simple as Tommy hoping to link Mosley to the heroin trade via the Billy Boys? Is he really going to double cross the Chinese? And, most importantly, is he setting up Michael to take the fall – and if so, does Polly know? Because it’s hard to imagine that the answer to that question is yes, and if it’s no then things are going to get very dicey indeed.

You sit on your throne and you instruct Polly Gray, who is of far richer blood than you, as to when she can and when she can’t marry …
– Rather sweetly Aberama Gold turns out to be far more than just a wandering-accented vengeance machine

Notes from the boardroom

Anachronistic yet strangely right song of the week

The song playing while Tommy sold his soul in parliament might have been very reminiscent of John Cooper Clarke, but was actually south London band Hotel Lux’s The Last Hangman. – Guardian