Presenter proves hell hath no fury like an economist scorned, as Volt fails to impress Moncrieff 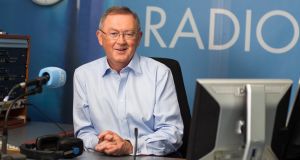 In inviting the pair of economists on to his show, Sean O’Rourke is acting as Don King-style fight promoter as much as honest umpire. Photograph: RTÉ

Sean O’Rourke has refereed a fair few ding-dongs in his time. But even for a seasoned newsman like himself, the set-to he hosts on Wednesday (Today with Sean O’Rourke, RTÉ Radio 1, weekdays) is memorable, not least because the feuding parties are not pugilistic politicians but rather educated economists.

Though not a profession normally associated in the public imagination with scrapping, economists can in fact be as antagonistic as the most partisan pol. They talk about money, after all, the root of many a dispute. Things can get particularly fraught when economists run up against each other, as when Irish economist and pundit Dan O’Brien squares off against his English counterpart Liam Halligan on the reliably contentious subject of Brexit.

In inviting the pair on to his show, the host is acting as Don King-style fight promoter as much as honest umpire. O’Brien and Halligan have form: this is a rematch of a previous clash on O’Rourke’s programme before the Brexit referendum in 2016. (Ever the pro, the presenter has archive clips on hand to add spice to proceedings.) Opening the bout, the pro-leave Halligan adopts the matey familiarity and patronising superiority that many Brexiteers seem to adopt in Ireland. He talks about his “regret” that Ireland is disregarding its economic interests by taking an “irrational” approach to the border: the country, he claims, is “determined to the be the good scout in the room in Brussels”.

O’Brien, meanwhile, talks about “the fantasies of the Brexiteers who don’t understand how the whole system works”, and is particularly concerned with getting Halligan to admit to mistakes in their previous encounter. “Can you just concede you were wrong that Ireland and Britain could do a bilateral deal?” O’Brien asks, his disdainful tone guaranteeing the opposite outcome.

So it continues. Halligan baits O’Brien about his “EU-funded mates”, deploying such reliable populist terms as “official Ireland” and “commentariat”. O’Brien sticks to the line that “nothing is straightforward, as Brexiteers are finding out”, which prompts sneering guffaws from Halligan: “He can’t stop himself, can he?” By the end of the encounter, there is real needle between the two guests. Listeners learn that the acrimony has been increased by a tweet from O’Brien referring to, yes, Halligan’s command of the facts.

Like a good referee, O’Rourke lets the two men go at each other, only stepping in when things get messy in the clinch. In the end, it’s an inconclusive bout, not just because the two men are largely arguing at cross-purposes: their inability to find common ground is a dispiriting omen for the ultimate outcome of Brexit. But it’s an entertaining encounter, in style if not substance, with Halligan’s bright but disruptively uncouth schoolboy running up against O’Brien’s fastidiously factual, slightly prissy teacher. If only every economics class was so lively.

Of course Brexit is but the most obvious manifestation of growing anti-EU sentiment across the continent, in the form of nationalist parties and populist politics. It’s hard to imagine a popular movement having the same atavistic devotion to the lumbering institution that is the EU, but ever a man in search of the weird and offbeat, Sean Moncrieff (Newstalk, weekdays) has found one. On Wednesday, he talks to Oliver St John, a spokesman for Volt, a newly formed pro-Europe, pan-continental movement.

Though Moncrieff’s guest sounds like he’s telling a politically correct joke when he explains that Volt was founded by “a German, an Italian person and a French person”, St John is deeply earnest in his aspirations. Whereas political parties are “rigid” in organisation, St John says that Volt seeks mass involvement: “It’s not just about seeking office but also about creating change within communities.” To underline the seriousness of his lofty rhetoric, he points to Volt members helping out on World Cleanup Day.

Moncrieff responds to his guest’s stilted sincerity with amused scepticism. When St John talks about fielding candidates in elections under the Volt banner, Moncrieff chuckles: “So you are a political party then.” On hearing that his guest wants an integrated European army, the host highlights the problems posed by Ireland’s neutrality. “We do foresee a great deal of oversight when it comes to what wars are entered, et cetera,” St John replies, appearing both blithe and geeky.

By the time St John admits, after an agonising pause, that he doesn’t know which European body would authorise military action, Moncrieff mercifully brings the interview to a close. His guest’s idealism is admirable, but his delivery has all the popular appeal of a swotty student debater. Volt may need more personal electricity to succeed.

Luke and Ryan Hart’s interview with Ryan Tubridy (RTÉ Radio 1, weekdays) is much more compelling, but far grimmer too. The Harts recount the psychological abuse meted out during their rural English childhood by their controlling father, who went on to murder their mother Claire and 19-year-old sister Charlotte before shooting himself in 2016.

It’s a horrific tale, but the Harts are astonishingly calm, with facts taking precedence over emotion, at least until they talk about the death of their mother and sister. As for the suicide of the man Tubridy dubs “a one-man Stasi”, Luke is candid about his feeling: “Our father’s life was not worth living, we’re glad he’s not here.” Tubridy largely cedes the air to the brothers, testament both to their character and their message about the insidiousness of such mentally abusive behaviour in the home. It’s an understated, truly hard-hitting item, making the rivalries of economists seem like handbags at dawn.

Radio Moment of the Week: Dunne’s blast from the past

Having curated last weekend’s Feile Classical festival in Thurles, Tom Dunne (Newstalk, Sunday-Thursday) devotes an edition of his consistently enjoyable evening to interviews and music from the Irish indie event. The tone is unsurprisingly celebratory, but its best moment actually comes during an archive radio clip featuring the late 2FM presenter Gerry Ryan, speaking about the original Feile in the early 1990s. In the clip, a caller bemoans the bad behaviour at the event, calling the festival the “Devil’s playground”. Ryan’s reply is characteristically mischievous: “Can you understand there are people this morning who think you’re describing a fabulous weekend?” Even now, Ryan’s wicked wit still raises a smile.