Save Me: No one is wholly good or entirely bad 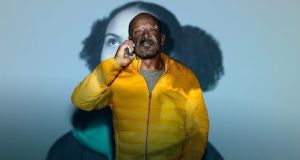 Nelly begins the series as prime suspect for his daughter’s disappearance, but quickly becomes her seeker

Late in the second episode of Save Me (Sky Atlantic, Wednesday, 9pm), a new six-part drama series created by and starring Lennie James, our dissipated hero asks for help. “I’m way behind myself and I need to catch up,” says Nelly Rowe, solemnly, and his words are freighted with double meaning.

The legendary estate drunk, given to acts of kindness and distended karaoke sessions, Nelly began the series as the prime suspect for his long-estranged daughter’s disappearance, but quickly becomes her seeker.

The girl, Jody, was lured away by someone impersonating Nelly online, drawing from uncanny access to the details of his life. Now it ushers the real man into a scrambling chase, piecing his history back together through a fog of drunkenness, trying to fathom his life, in every sense, struggling to catch up with himself.

“I’m nothing,” he told the police when the show began, with a sincerity hard to dispute. “I’m nothing to her.”

The clever thing about Save Me is that Nelly has to retrieve his something. For all its keen social realism, the show is a spin on the detective story, where Nelly has to scour himself and his friends for clues.

Nick Murphy’s meticulous direction – which often makes the camera frame feel as claustrophobic and confining as the high-rise flats of London’s Deptford – invites both Nelly and the audience to take a closer look at grim situations. Often the camera alights on faces in public spaces who might as easily melt back into the crowd as emerge as significant characters.

The more thorny of the latter is Melon (the terrific Stephen Graham), a long-time friend of Nelly’s and, he discovers, a convicted paedophile, whose claims towards rehabilitation are hard to gauge.

“Proper f**king dark,” as Nelly says of his own predicament, but no one here is wholly good or entirely bad.

Suranne Jones, as Jody’s anguished mother, for instance, is heart-breakingly believable whether helplessly hugging the actor of a Crime Line recreation video, or getting wasted at a pub lock-in afterwards – a fascinating portrait of a woman spinning through an unimaginable situation.

Though Save Me is given to sensational cliffhangers, it isn’t inclined to wallow in despair, fusing the thrill of genre with the texture of life. All those faces, it knows, and their complicated interdependencies, are the powers that keep communities together when all other supports abandon it.

“We are the ones we’ve been waiting for,” goes a Hopi Nation saying. The characters in Save Me know the feeling: and its they who must come to the rescue.

Oprah with Meghan and Harry: One by one the bombshells drop...