Operation Transformation: 10 years on do we still need it?

Amid a glut of dodgy online dietary advice, the show’s simple message has real value 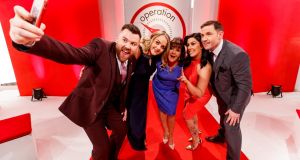 “He’s a trucker with a breakfast roll heart,” says Gerry Ryan of Donal Looney, one of the “leaders” in the first ever season of Operation Transformation.

Season One of the RTÉ show – which had its 11th season finale last night – went out in January 2008, a time of deepening recession, gangland shootings and miserable weather. The Burlington Hotel had just closed its doors, €4 billion had been wiped off the Irish Stock Exchange, and Fermoy and Mallow were under water.

But in the world of Operation Transformation – less than kindly dubbed the “flab to fab fitness show” by the January 2008 RTÉ Guide, while the participants were “flab busters” – the primary threats to the wellbeing of the Irish people were breakfast rolls, Sea Breezes and carbohydrates of all kinds. Breakfast rolls especially.

In those early episodes, you couldn’t help feeling that Ryan had a particular fondness for people who had fallen off the wagon, and the more breakfast rolls involved the better.

“Did you misbehave over Christmas? Puddings, massive amounts of carbohydrates, cakes, booze?” he would ask participants, before eagerly confessing that he had done a bit of misbehaving himself. “I did, I did. I took it to a new level.”

“Were you in Temple Bar last night?” he asks Violet O’Shea, who was 23 stone 10 pounds at her first weigh-in. “Please don’t tell me you were on the daiquiris and the Sea Breezes and the baskets of sausages.”

Being Gerry Ryan, of course, the teasing was always undercut with a large dose of empathy. “You’re a brave, courageous woman,” he told O’Shea, and you knew he meant it.

Despite the omnipresent scales, the show’s appeal was that it always about more than weight loss. The original “trucker with a breakfast roll heart” went on to run the Dublin marathon in under four hours.

Ryan told the RTÉ Guide participants his goal was to help participants regain their personal dignity, and that they were not in it “to become the next Shayne Ward. ”

In a sign of just how long ago this was, I had to google Shayne Ward. (Winner of the second series of X Factor, Irish Traveller, great set of biceps.)

The fact that the ancestors in question lived between 2.5 million and 10,000 years ago and had completely different biological make-ups to modern humans is beside the point

A lot has changed in the Irish health and diet landscape in the 10 years, and 11 seasons, since. Mostly, what has happened is that we have all moved away from a focus on weight to a broader, more holistic notion of wellness.

We are more knowledgeable about our health. We now expect to live longer than we did 10 years ago. We have a keener understanding of the role of nutrition in a range of illnesses, from diabetes, to cancer, to Alzheimer’s.

It hasn’t been an entirely straightforward journey to enlightenment, though, and there have been some peculiar interludes along the way. Take the brief flirtation of a vocal few with the “paleo diet”.

Paleo eating, which catapulted into public consciousness around 2012, fading back into obscurity around three years later, means eating like our ancestors did in the Paleolithic period. The fact that the ancestors in question lived between 2.5 million and 10,000 years ago and had completely different biological make-ups to modern humans is beside the point – it involved pulses and green stuff and being hungry all the time, and that was apparently how its advocates knew it worked.

The paleo diet came and eventually it went, but it left behind a legacy of an obsession with scientifically dubious notions about “clean” eating, and the steadfast conviction that sugar is the root of all evil and dairy is positively scary.

The past ten years also saw us experiment with the 5:2 diet (eat as you wish five days a week, and like a pernickety toddler the other two); the baby food diet (eat like a baby all the time); the #whole30 diet (think of it as the paleo diet redux).

During that period, the internet would also revolutionise our eating and fitness habits. When Operation Transformation was in its infancy, the term “fitness blogger” had yet to register on Google Trends, and Instagram was still a piece of unwritten code twinkling in a future zillionaire’s eye.

Even four years later, when the photo-sharing platform was snapped up by Mark Zuckerberg, it was still a place where you posted photos of kittens and lattes (dairy alert!).

These days, the kittens and the lattes are mostly gone, and Instagram has become a place where bloggers with no qualifications – though they all have very nice skin – dispense nutritional psychobabble, and make those less genetically blessed feel bad about themselves.

Through all of these changes, passing fads and nutritional mini-revolutions, Operation Transformation has retained its place in the hearts of the Irish public

Back in 2008, the amount of time we were spending on our phones hadn’t yet become a health concern, and if any of the Operation Transformation had suggested “posting a selfie”, they’d have been met with a blank look and directions for the nearest post office.

Ten years on, we have smartwatches and step counters (and burgeoning smartphone addictions). We also have a more sophisticated understanding of the role of carbohydrates, which we now know were getting an unfairly bad rap in 2008.

We know that eating low-fat food doesn’t mean you lose fat. We know that sugar isn’t just bad for your teeth, that no-one who has a liver and kidneys actually needs to detox, and that only those who are coeliac actually need to avoid gluten.

Ten years on, let’s face it, we’re all nutritional experts. In truth, we have no need of Operation Transformation.

And yet, apparently, we do.

Through all of these changes, passing fads and nutritional mini-revolutions, Operation Transformation has retained its place in the hearts of the Irish public by staying the course, keeping its focus firmly on laying off unhealthy grub, exercising more, and busting what we almost certainly wouldn’t call “the flab” today.

And steering clear of the breakfast rolls.