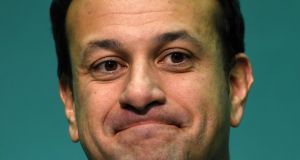 Leo Varadkar tells listeners: ‘I’ve been told there’s no threat to food security’; less reassuringly, he also remarks that ‘the Army is on standby’

Putting a brave face on bad news is an essential skill for any head of government. Sounding cheerful about it is quite another thing. Despite facing the prospect of the second major weather event of his tenure as Taoiseach, Leo Varadkar sounds decidedly breezy on Wednesday morning when he talks to Shane Coleman on Newstalk Breakast (weekdays).

After a clearly relieved Coleman expresses his delight that the Taoiseach has managed to make it into studio, Varadkar chirpily observes that “the traffic was unusually light this morning”, which will doubtless come as a comfort to those listeners gingerly making their way along slippery roads. In the same casual tone, he reassures listeners that “I’ve been told there’s no threat to food security”; less reassuringly, he also remarks that “the Army is on standby”. It’s quite proper that the Taoiseach should set people’s mind at rest about their safety – after all, the Army are on call for rescue duties rather than to shoot bakery looters - but his manner, before the storm has reached its serious peak, walks a thin line between easy self-confidence and perfunctory glibness.

Coleman lets all this go, perhaps because he’s focused less on meteorological topics, however pressing, than on issues more obviously within his guest’s control. After a run-through of the latest developments in the Brexit soap opera, in which the Taoiseach sounds palpably annoyed by his UK counterparts, Coleman asks about reports that the publicity material for the Government’s Ireland 2040 development plan were made to look like straight news reports. It’s a bona fide political issue, the Taoiseach responds to the question as though it’s an irritating distraction, dismissing the charge that he was behind it as “trumped-up”.

For his part, Coleman says that he doesn’t want to dwell on the subject, only to keep pressing. “Are you not aware why people are in any way uncomfortable?” the host asks, highlighting the number of Fine Gael politicians featured in the articles.

“It’s an important issue, fundamental to democracy,” Coleman continues. The Taoiseach offers assent, but doesn’t sound entirely convinced. The presenter’s understated but persistent approach is less beast from the east than pest from the west, but it’s a credit to his effectiveness that the Taoiseach seems happier talking about the appalling weather.

Nerves before the storm

The latter topic, unsurprisingly, dominates the airwaves for the week, beginning with the initially light-hearted but soon tedious subject of dwindling bread supplies. On Tuesday’s edition of Today with Seán O’Rourke (RTÉ Radio 1, weekdays), reporter Evelyn O’Rourke meets south Dublin shoppers as well as supermarket manager Cian, who tells of his shelves being emptied. As well as selling out of bread (even the “posh” variety), milk is also in demand (black tea being the ultimate symbol of dystopian societal breakdown in Ireland) and alcohol too, Cian notes with a knowing laugh.

The reporter remarks on the amount of eye-rolling among customers at such panicky behaviour, but still they participate. It’s a short but telling item, illustrating the ludicrousness of the situation, yet conveying the nervy mood before the storm hits.

When it does, listening to O’Rourke’s show is more like tuning into a police radio scanner than a radio magazine programme, so heavy is it with rolling updates on transport and conditions. But amidst the real-time analysis, O’Rourke also looks at events from a longer-term perspective. Prof John Sweeney of Maynooth University explains the climatic reasons behind the snowfall, outlining recent changes in the Atlantic jetstream, which largely governs our weather.

“It’s been doing very strange things for the past month or so,” Sweeney says, adding that current temperatures in the Arctic are no longer, well, Arctic, but above freezing. Though he is reluctant to draw conclusions from one event, he suggests that the current weather is “part of the price of climate change”, with the North Pole warming up quicker than expected. It’s a neat summation of climate science for the casual listener, albeit slightly terrifying too. Sweeney sounds even more cheery talking about our unprecedented weather than the Taoiseach, but then again laughter is the only possible response to a potentially catastrophic future, along with tears.

Reasons to be cheerful

Provoking strong emotions has always been a key part of Cormac Ó hEadhra’s robust approach to current affairs presenting, but at times he is oddly muted in his new weekend show (Saturday with Cormac Ó hEadhra, RTÉ Radio 1). The former Late Debate presenter certainly is thrown by his new afternoon slot: he talks about his guests “joining us this evening”. Even when the debate kicks off with the charged issue of banks selling mortgages to vulture funds, Ó hEadhra uncharacteristically takes a back seat. Instead, the host allows journalist Dearbhail McDonald and Senator David Norris take turns at harrying Minister of State for Local Government John Paul Phelan. It’s a lively exchange, heavier on detail than many of Ó hEadhra’s debates, without sacrificing any entertaining friction.

But fears that the presenter has mellowed for his daytime audience are allayed during his interview with pro-Brexit Labour MP Kate Hoey. Hoey, who has suggested that the Belfast Agreement should be revisited, says she wants to separate Brexit from the Stormont agreement, even as she repeatedly connects the two issues. This prompts a full array of gratifyingly exasperated interjections from her host. Suffice to say, the encounter is a fine illustration of the Brexiteers’ wilful refusal to deal with practical issues. “I’m watching a panel with their mouths open,” the host comments gleefully afterwards. But if the interview hasn’t resolved any issues, Ó hEadhra sounds exhilarated by the argument, as does Hoey, who expresses her desire to appear again. Everyone has different reasons to be cheerful.

Radio Moment of the week: Shay it ain’t so

On Wednesday, as many listeners to Rising Time (RTÉ Radio 1, weekdays) wake to a blanket of snow, host Shay Byrne helps sooth early morning nerves in the way he knows best, namely with inoffensive hits and gently laconic patter. But lest anyone be under any illusion about how heavy the snowfall is, Byrne makes it clear when introduces the regular traffic news slot. “Normally we’d have AA Roadwatch,” he says, chuckling. “But they haven’t made it into the office today, because of the road conditions.”