Preview 2018: The year of the Monkeys – and Vampires

Arctic Monkeys and Vampire Weekend come out of hiatus with new albums, while Liam Payne gets off the pot and Sigrid and Saint Sister show why they’re tomorrow’s women 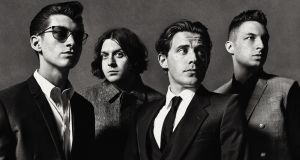 There’s more than a few pairs of ready ears when it comes to Arctic Monkeys’ new album. 2013’s AM found the modern-day storytellers at the go-big-or-go-home point in their career, and, champs that they are, they took another go at the Glasto headline slot before calling a hiatus. Recording sessions for the follow-up began in September, with bassist Nick O’Malley explaining they’re aiming for a 2018 release: “If it isn’t, we’ve got problems.” No other details have been released, so expect to hear much more about it in the coming months.

Two years after their break-up, we’re well into the post-One Direction era, defined mostly by solo albums and questions on when they might reform. The debut albums from Zayn, Harry and Niall reached number one in the US, which might explain why Liam Payne has hesitated over his release.

Although he’s already put out a trio of singles, from the rather raunchy R&B Bedroom Floor to Strip That Down, in which Ed Sheeran’s input is very audible, there’s a short delay on his LP while he rejigs the result. “[The album] was almost done and then I decided I wanted to do something a bit different and push the boundaries,” he told Metro newspaper in the UK. “I’ve met some new producers that I really like, and I have a ballady kind of thing coming out with somebody, so that’ll be really cool.”

He’s said no more about this collaborator other than it’s a female (wifey Cheryl?) but we can expect some big names when it’s released this year: Pharrell Williams is one mogul he’s recently been snapped with.

“I don’t really like writing music by myself, for myself. I’d much sooner have someone imprint a little bit of themselves into what they think of me, and I’ll take it and run with it,” he’s said. “It’s been really great and I’m so happy that people want to work with me.”

Snapped up by the same A&R team that signed Amy Winehouse, and with Don’t Kill My Vibe reaching 25 million plays on Spotify, crystal balls aren’t needed to predict big things for Norway’s Sigrid Solbakk Raabe. Her recent appearance at Other Voices set out her stall: the 21-year-old is a fully formed, captivating presence onstage, with chocolate-rich vocals you’d recognise anywhere. She’s confirmed her debut album is slated for 2018, and collaborators include Sacha Skarbek (co-writer of Wrecking Ball and You’re Beautiful), Paul Epworth (aka Adele’s secret weapon) and Jamie Hartman (Birdy, James Bay, Paloma Faith). We’re trying not to get too excited but . . .

It’s been five years since New York’s finest graced us with Modern Vampires of the City, a triumph of a fourth album, which saw them explore a rarely struck balance of same-but-different. Since then, Rostam left to go solo though remains on good terms, Chris Tomson and Chris Baio released solo side projects and Ezra Koenig created a Netflix anime show featuring the voices of Jude Law, Alexa Chung and Susan Sarandon no less.

But in September last year, Koenig confirmed Vampire Weekend’s new album was 80 per cent done, putting a 2018 release on the cards. Mitsubishi Macchiato, as it’s tentatively titled, is expected to emphasise the craft of songwriting.

“There’s a lot of Vampire Weekend songs that have elegance in terms of baroque chords, arrangement, and interesting turns of phrase – but we’ve never had a song as elegant as some of that good country-folk songwriting,” said Ezra. “One of the things that I’ve always been hard on myself about is not having enough songs that you could play for somebody and they’d immediately know what the song is about. I cannot say every song rose to that challenge.” Intriguing.

After tantalising us for far too long, it looks like Saint Sister will finally release their debut album proper in 2018. Taking their blueprint from Celtic harp traditions but allowing influences of 1960s folk and lo-fi acoustic to float in, the duo of Morgan MacIntyre and Gemma Doherty have been making music that is consistently inventive, familiar and ethereal – suggesting that however captivating they are live, the longform record is the spiritual home of their sound.

They’ve already released enough tracks to compile an album, including Madrid, Blood Moon and Causing Trouble, but expect only a handful to make it to their debut, for which Alex Ryan (also Hozier’s bassist) continues as co-producer. Expect it to drop after summer.

In an age when acts love to play havoc with schedules by unveiling surprise albums, we know not all new records’ release dates are revealed in advance. So in 2018 we’re likely to see newies from Muse, Paul Weller, Soak, MGMT, The Prodigy, Charli XCX, My Bloody Valentine, Chvrches, The Rolling Stones and Jack White land on our laps at some point.

If we’re lucky, we might also hear from Brits critics’ choice Jorja Smith, Kanye West, The Yeah Yeah Yeahs and Hozier, who’s knee-deep in the follow-up to his 2014 debut.

It’s all go on the domestic scene, with many an Irish act delivering long-players in 2018. Expect not-so-difficult second albums from Hudson Taylor and Gavin James, plus returns from Glen Hansard, David Turpin and The Blizzards, who are poised to release their first album in nine years in April.

Le Galaxie also have an exciting year ahead: their third album Pleasure will be released via Sony in the US in March, followed by a tour of the States in support. And ones to watch out for? Keep poised for The Academic’s album on January 12th, a potential album from Bitch Falcon, and a pre-summer debut from Catherine McGrath.