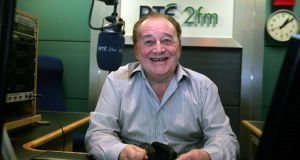 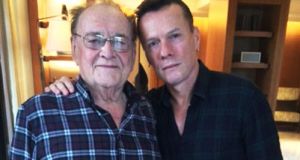 Gogan worked in broadcasting for almost six decades and was best known for his work on RTÉ 2FM, where he worked as a DJ for 40 years before moving to RTÉ Gold last year.

Gogan, who lived in Templeogue, Dublin died peacefully on Tuesday morning following a recent illness at a care centre in Bohernabreena surrounded by his family.

His removal will take place on Thursday evening to the Church of St Pius X in Templeogue followed by his funeral mass on Friday morning at 11.30am.

The broadcaster was predeceased by his wife Florrie and is survived by his five children Gerard, Orla, Gráinne, David and Sinéad and 12 grandchildren.

Extending his condolences to Gogan’s family, Mr Higgins said the broadcaster had an indelible impact on Irish music and promoted up-and-coming and more established Irish musicians.

“Blessed with one of the warmest voices in Irish broadcasting, Larry Gogan not only defined RTÉ’s coverage of music, but also shaped the mould for many generations of DJs,” Mr Higgins said.

The President said the “Just A Minute” quiz, which was renowned for some of the incorrect answers suggested, will “live in the minds of Irish people everywhere”.

Bob Geldof, lead singer of the Boomtown Rats, whose single “Like Clockwork” was selected by Gogan as the first record to be played on RTÉ Radio 2 (which later became 2FM) when the station began broadcasting in May 1979, said the presenter had played a very important role in giving young Irish bands a break on radio.

Speaking on RTÉ’s News at One, Geldof said he “ just loved the music and understood it”. Gogan represented “a lifeline to the contemporary” for rural Ireland of the late 1970s, Geldof added.

“He transcended generations - whether it was a hilarious moment on the ‘Just a Minute’ quiz, the breakneck countdown of the weekly top 40, or the first play of a Christmas song - Larry didn’t just preserve these traditions, he created them,” Ms Forbes said.

Dan Healy, head of 2FM, said Gogan was “arguably the greatest music DJ in Irish broadcasting history” and “a huge part of the foundation on which 2FM was built”.

U2 drummer, Larry Mullen jnr, who had a custom of appearing on Gogan’s show every time the band brought out a new album, said they formed a strong bond over interviews that became known as “The Two Larrys” and occasional long lunches.

“We connected somehow. Maybe it was our shared northside credentials,” he told RTÉ.

Born in Fairview in 1934, Gogan presented The Golden Hour until 2014 and also commentated frequently on the Eurovision song contest.

A sombre mood permeated the air in the Montrose campus on Tuesday as RTÉ staff learnt of the death of another famous presenter shortly after the recent loss of Gay Byrne and Marian Finucane.

A book of condolences was opened for Gogan in the RTÉ Radio Centre in Donnybrook for people to sign - located a short distance across a reception area from a similar book opened following the sudden death of Finucane last Thursday.

Writing in the book, RTÉ radio presenter, Michael Cahill, said Gogan was “the best of the best” and not a broadcaster or presenter but “the DJs’ DJ”.

Radio archivist Robert Canning said it was often forgotten that Gogan had a long history in sponsored radio during the 60s and 70s as well as having a number of acting roles in the theatre and radio plays.

“He wouldn’t bad mouth anyone even those in RTÉ who had fearsome reputations. The worst I ever heard him say was to describe The Corrs as The Nolan Sisters with traditional instruments,” he recalled.

Radio 1 broadcaster, Ray D’Arcy, said Gogan was the first person he met on his first day after rejoining the station five years ago.

“He just gave me the most lovely welcome back with that voice that was straight from central casting,” said D’Arcy.

He added: “Larry was the luckiest man in the world as he was doing a job he loved.”

Late Late Show presenter Ryan Tubridy paid tribute to his former colleague. “He was one of those people who was a gentleman and a gentleman. He was kind, he was thoughtful and he was somebody who people trusted. You heard his voice and you thought, the world is okay, and there are not many of those around, so he will be missed,” he said.

Speaking after the funeral of Marian Finucane, Tubridy said that it was “very, very sad day” for people in RTÉ, while people around the country felt they had lost friends with the deaths of Gay Byrne, Finucane and Gogan.

Fellow presenter Miriam O’Callaghan recalled meeting Gogan just a few weeks ago on the steps of RTÉ’s radio centre and giving him “a big hug.”

“He is the most life-affirming person. I have never seen him in a bad mood. He was really sweet. He would always send you a text, saying well done. He was a beautiful person,” she said.

“Whatever people say about RTÉ - and there is a lot of criticism that is justified - but the three people, Gay, Marian and Larry, were actually three outstanding broadcasters who could have made it on any stage in any broadcaster on the planet,” she said.

“People have a lot of affection for them and loved them, and it is just a shock that the three of them are gone.”

RTÉ broadcaster Joe Duffy said he visited Gogan 10 days ago and that he was in “his usual great form with his beautiful family”.

RTÉ presenter Marty Whelan has described Gogan as a “wonderful man” and “a dear friend”.

Minister for Culture Josepha Madigan said “we have lost another of our cherished broadcasters”.

“He was loved by the listeners and artists alike. My condolences to his family and friends,” she said.

Fianna Fáil leader Michael Martin said Gogan was a “rare broadcasting treasure” who touched the lives of hundreds of thousands of people “who welcomed him into their lives and their homes on the radio over the decades”.

“The passing of Larry is the end of an era. He was a rare talent and a strong supporter of Irish music throughout his career,” Mr Martin said.

Gogan broadcast his first radio programme on RTÉ Radio 1 in the 1960s and was in the original line-up in 1979 of RTÉ Radio 2, which later became RTÉ 2FM. He presented a regular show there until last year.

Gogan was honoured at the Jacob’s Awards in 1986 and was awarded the IRMA (Irish Recorded Music Association) Honours Award “in recognition of his outstanding contribution to Irish music”, and the Industry Award at the 2007 Meteor Awards.

The Movie Quiz: Marilyn Monroe and a title she did without
5