Alison Spittle’s new show; David Simon in NYC; and a doc on the most famous Irish person ever: Shergar 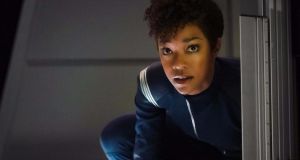 Star Trek: Discovery
Netflix, September 25th
In the 1960s, Star Trek viewers had the swashbuckling Kennedyesque James T Kirk exploring the universe one sexy alien at a time. In the 1990s they had cerebral internationalist Jean Luc Picard who used a different organ to foment peace, love and understanding (his brain; the organ was his brain). By the mid-nineties we had Star Trek: Voyager hopelessly wandering the Delta quadrant (representing our ideological rudderlessness after the fall of communism).

Yes, each iteration of Gene Rodenberry’s utopian space opera reflected its era. Consequently, the new series, Star Trek: Discovery, is just footage of a weeping man sitting in the dark eating Easi Singles in his underpants. Okay, the new series is actually a prequel to the original and, at least in the trailer, features The Walking Dead’s Sonequa Martin-Green looking tense as bumpy headed Klingons declaim and things explode. I am hopeful.

“Fnaar Fnarr, a drama about pornography,” says you, rubbing your legs, elbowing me in the ribs and winking like you’re having an episode. I’m sorry. It’s not going to be that sort of show. The Deuce is going to make you feel bad about pornography, the way Game of Thrones made you feel bad about Sean Bean, weddings and dragon husbandry. Yes, it’s a deep dive into class, gender and corruption as creator David Simon recounts the rise of the sex industry in 1970s New York. His last HBO series, Show Me a Hero, managed to make council meetings about urban planning enthralling. Also, James Franco plays twin hoodlums in this, so the scenery may have bite marks.

Millennials. What are they like, with their outrage and internships and pop-up restaurants and 21st-century ennui and amateur murder investigations with tragic consequences? The first series of Search Party was a brilliant merger of detective noir, urban satire and Seinfeldian unlikeability and can be watched under five hours. You should do that. The new series starts in November.

Broad City
Comedy Central, soon
And while you’re at you should watch the very funny Abbi Jacobson and Ilana Glazer rampage around New York. Broad City is a guide to life really.

Mindhunter
Netflix, October 13
Yes, what television needs is more shows about hard-bitten FBI agents on the trail of serial killers. There aren’t enough of those. But wait. This one is from David Fincher, who sort of perfected such narratives with Seven. These cops are totally different from other cops in similar shows. This duo are trying to get inside the killers’ heads. Their names are John and Bethany Mindhunter. It’s a comedy. Two of the last three sentences are misleading.

Young Sheldon
TBA
Not since the Muppet Babies or li’l Ant and Dec or baby God (Jesus), has fiction explored infant versions of pre-existing characters. This is a shame. I mean, who wouldn’t want to see toddler Frank Underwood? Or tot Jon Snow from Game of Thrones and/or Channel 4 News? Or Tiny Tony Soprano and his tykish troop of racketeering rascals? In lieu of such gems, we get Young Sheldon in a prequel to the Big Bang Theory. Oh well, it’s something I suppose.

Living with Lucy
TV3, on now
Lucy Kennedy shacks up with famous people and noses around their stuff. Where does Twink horde her gold? At what hour does Simon Delaney take his snuff? What is Dáithí Ó Sé burying in his garden in the dead of night? Why are Crystal Swing crying? Lucy, a quick and engaging presenter, usually has the answers.

Unfortunately, next week she’s flatsharing with right-wing hate-loon Katie Hopkins, who has taken time out from calling refugees cockroaches and suggesting they be fired on from gunboats. Jesus lads. What next? A cosy cuppa with General Franco? A chat about collectible china with Rose West? A friendly game of squash with the bear that killed Grizzly Man? I’ve just looked at the schedule and, yes, she’s doing all those things.

Alison Spittle’s new show is about a radio DJ who, after an on-air snafu, is banished from Dublin (paradise) and returned to the midlands (barren irradiated outlands). From the start it’s funny. Firstly, a woman with her own radio show? In Hook’s Ireland? Hilarious. Secondly, it’s Alison Spittle and I know from hanging around the set earlier this year that it’s going to be comedy gold. Thirdly, small-town Ireland needs to be rescued from reflective short-stories and placed into sitcom where it belongs.

I’ll give this a second chance, because Amy Huberman is a great actor who deserves a decent telly vehicle. A Good Wife knockoff about a lovelorn solicitor isn’t necessarily that vehicle. Indeed, I initially mistook Striking out - aka Herself (my title) - for a fly-on-the-wall documentary about brunch. But if the programme makers retool it for the second series as a biting satire of the Irish legal profession in which the over-privileged fail upwards (which is basically what happens in the first series), it might work. I live in hope.

Shergar
RTÉ1, TBA
Shergar was the most famous Irish person ever. He worked as a horse and he was probably kidnapped by the second most famous Irish people ever (The ‘Ra). So this programme should be compelling. I’m told it stars Tom Vaughan-Lawlor as Shergar, the Gleesons as The Ra and Jennifer Lawrence as Linda Martin. Okay, I’ve just learned it’s a documentary. That’s good too, I suppose.

There are loads of promising RTÉ documentaries coming up including Fab Vinnie, about Vincent Hanley, and No Country for Women, about Irish women and the State.

The preview footage features the Punisher running around a wood killing people Rambo style, and, against the odds, Jon Bernthal manages to imbue the sociopathic grunter with charisma. Go Gun Boy! I mean, Punisher.

The Blue Planet II
BBC1, TBA
A nature programme starring David Attenborough and his chum, The Sea. Bound to be good.

Ireland’s Got Talent
TV3, January
We know Ireland hasn’t got talent. Previous talent shows have proved this. One year the winner of the All Ireland Talent Show was a guy who was really good at Microsoft Excel. Yeah, we’re an awful shower of tuneless goms. I suppose the fun is in the judging really, and Ireland’s Got Talent’s judges are Louis Walsh, Michelle Visage from Drag Race (hurrah!), Jason Byrne and Denise van Outen. It will also feature versatile Lucy Kennedy in the Ant & Dec role. Presumably they’ll have her throwing her voice and using some sort of mirror and/or hand puppet.