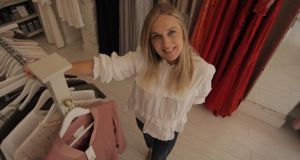 Stunned by a shop redesign, Kara Maher regards her reorganised rails with something like awe: ‘She’s just literally put options together’

Recently, during a very reluctant red-carpet interview, the actor Jim Carrey decided to get deep. “There is no meaning to any of this,” he told a spooked reporter from the E! Channel. “I just wanted to find the most meaningless thing I could come to, and join.”

The event was New York Fashion Week, and Carrey was wearing a piece presumably of his own design: an iridescent and shimmering number woven from existential despair. Doing the rounds online, the interview clip was regarded less as a trenchant take on the vacuity of garment culture, than as further evidence of Carrey’s tormented eccentricity. Even during a week filled with much more pressing matters, fashion was too easy a target.

Frock Finders (Tuesday, RTé One, 8.30pm), a new series about Ireland’s boutiques and their purse-lipped patrons, isn’t quite sure how seriously to take its subject either. Filmed on the shop-floor level by directors Sarah Breen and Bonnie Dempsey, in styptic blinks and sea-sick lurches, and following the delicate dance between independent retailers and their customers – rather than labels, designers or models – the show is not so much about fashion than the pursuit of shopping. But, rest assured, there will be changing-room montages.

The programme opens lightly, in the Newcastle West boutique Kimono in Limerick, where proprietor Ailish displays either a canny sales technique, or a mild obsession, by specialising in clothing and accessories worn by Kate Middleton and her mother.

Her business is serious – we see her take in €2,000 for a single sale – but the soundtrack is a twinkly music box. It’s oddly infantilising, as though the programme makers have internalised the expectation that their subject is a frivolous one, and indeed, everyone seems to make that swivel. “They are not cheap,” Ailish says of her dresses with an embarrassed laugh, then pivots into deadly serious tone: “I think this one is €695.”

Frock Finders, like its customers, is thus going to try on as many styles as possible before making a decision. That may be why it interleaves the wry self-deprecations of a 25-year-old Ais (“I feel like a Telletubby”) with her frank discussion of living with Cystic Fibrosis (“I suppose it’s never stopped me from doing anything.”).

Or why it slaloms between the stunning dress-making skills of sisters Charlotte and Jane in Kinsale (whose barrister client, fortuitously, may be the reincarnation of Audrey Hepburn) and Kara Maher, of Dublin outlet Frock ‘n’ Fabulous, who is struggling to keep her business going with a footfall distracted by their smartphones.

Stunned by her brand consultant’s shop redesign, Maher regards her reorganised rails with something like awe: “She’s just literally put options together.” That sounds like Fashion Theory 101, but it is the focus of the show: boutiques propose and customers dispose. Sure, it may all be meaningless. But you might as well dress with some sense.