Red Hot Chili Peppers at 3Arena: everything you need to know 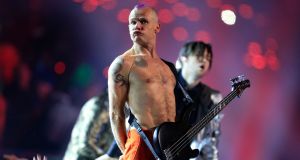 Ah tis yourself Flea, we haven’t seen you in a while. Photograph: Rob Carr/Getty Images

Once upon a time, you couldn’t swing a bag of cats in this town without knocking  Anthony Kiedis out. An outdoor Red Hot Chili Peppers gig was a fixture of the Irish summer during the Californication, By the Way and Stadium Arcadium eras, with Irish fields and parks awash with cord pants and keychain wallets.

Now, as we are all a bit older and we’ve stopped boasting so much about what we’ve got that you’ve got to get it put it in you, the frequency of these gigs has slowed down. But the fever for the true RHCP fans is still strong. You could say that they can’t stop, they’re addicted to the shindig . . . no? Alright. Fine.

Here’s everything you need to know ahead of their grand return to Ireland.

Are tickets still available? Nope. Keep an eye on Twitter though. Someone may need to offload a ticket using the #ticketfairy hashtag.

What time does everything kick off? Doors open at 6.30pm and UK rapper Lady Leshurr will kick things off at 8pm. The lads are expected onstage at 9pm.

How do I get there? While there is parking available in the Point Village (you can prebook a spot online for €12 through Ticketmaster), gig goers are encouraged to leave their cars at home and take the red line Luas or use Dublin Bus. The 151 operates every 10 minutes during rush hour and it will drop you on Castleforbes Road, the closest stop to the venue.

You can also take a stroll along the Liffey but the weather hasn’t been kind to us lately and large umbrellas are among the banned items in the 3Arena.

What about security? Bags will be searched upon entry and anything that may be deemed as a weapon – like bottles, cans, selfie sticks, large umbrellas, iPads/tablets, video cameras, professional cameras (lens 35mm or more), audio recording devices, Go-Pro, large posters (A3+), large flags on poles, belt chains, laser pointers – are prohibited. So pack light to keep the wait in line as short as possible.

What are they likely to play? Seeing as it’s The Getaway World Tour, you’re going to have to hear the new stuff. Judging from this setlist from their Reykjavik gig on July 31st, they’ve slotted new songs in-between all of the old favourites so you will have to make your trips to the bar quick and prompt.