‘Electric Dreams’ tells us to trust the robots, not the humans

TV review: Another Philip K Dick adaptation, in this boom time for paranoia 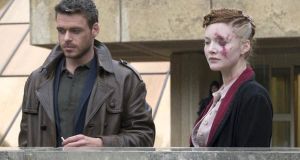 Robots that are indistinguishable from humans. False memories implanted by sinister agents. A police force that can arrest you for crimes not yet committed . . . Such are the engrossing ideas within Philip K. Dick’s science fiction writing, with its deep dark appeal to human paranoia.

Still, you wonder how the famously tormented writer might have viewed his posthumous popularity.

These ideas have been liberally adapted, refined and rebooted for the screen: a Blade Runner sequel and a new series of The Man in the High Castle are forthcoming.

Perhaps Dick, who began writing during the anxiety of the Cold War, and through the pessimism of the Vietnam War, would have been gratified to find so many new fans. Or perhaps it would have compounded his worst fears: everybody really was watching him all along.

Electric Dreams (Channel 4, Sunday, 9pm), a starry new anthology series based on Dick’s short stories, arrives during another boom time for suspicious minds. We exist without privacy, tracked by our phones, our data captured and sold by social media networks, at a time when everything from corporations to elections can be hacked.

How much of a stretch is it, then, that the authorities will soon have access to our thoughts?

There is a sly joke in the opening episode, The Hood Maker, in which society is divided between “normals” and “teeps” (telepaths): someone has begun manufacturing hoods that prevent thoughts from being read – the logic behind both high-encryption security settings and any vulnerable soul ever moved to make a tinfoil hat.

Written by Matthew Graham, it gives London a forcible Blade Runner make-over, where a noirish detective, Agent Ross (An Klondike’s Richard Madden) is paired with an obliging teep, Honor (Holliday Grainger) to root out dissidents in a city on the brink.

Honor, who bears the facial birthmark of all telepaths, an oppressed ethnic group, refers to herself at one point as “software”, capable of tapping into the telepathic grapevine to find, for example, a handy list of fabric outlets in the area. An obedient assistant with the capacities of a psychic search engine, she is, essentially, Siri made flesh.

Otherwise, the episode’s vision of the future is one of ruined landscapes and stalled technologies, of six-shot revolvers, Molotov cocktails and typewriters, of tuk-tuks hustling through dusty streets.

That will recall other Dick-inspired dystopias, an appropriately bleak, canny idea that the future will bear no progress.

Some things never change, though. Normals, as ever, come out of it very badly: corrupt, conspiratorial, evolving only in their capacity for cruel sexual exploitation.

As with HBO’s recent Westworld, which sided instinctively with the robots, today’s disillusioned sci-fi would rather root for anybody but us. Electric Dreams isn’t anywhere near as glossy as Westworld, nor quite as transfixing as the immediate forecasts of Black Mirror.

Deviating from the letter of Dick’s fiction, it is hard to say whether it admires his spirit or simply wants to hack his brand. Dick, a visionary pessimist, might have seen that one coming too.