One ping after another: Why we all need a notification detox

They alert us to calls, texts, even exercise times. Should we turn them all off for good? 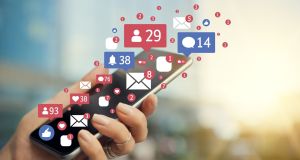 Three years ago Aishah Iqbal had just qualified as a doctor and was finding it a “steep learning curve”. She often felt overwhelmed at work – and whenever she took out her phone and saw “all these messages coming up” she felt worse. “It was very easy to get distracted from why I’d pulled my phone out, or to feel like there were so many people that I needed to reply to immediately.”

When we talk about the fragmenting effect of technology on our attention, or the dopamine hits that keep us refreshing our feeds as if they are buttons on fruit machines, we are often thinking about notifications: the pings, pop-ups and glowing red dots that pull us back into our phones, and push us from app to app.

According to one small study in 2014, mobile-phone users receive an average of 63.5 alerts every day, with most viewed within minutes – whether the phone is on silent or not. A 2016 study by Deloitte found that people check their phone, on average, 47 times a day – often in response to alerts. It is hardly any wonder some people are undergoing a notification detox.

I turned everything off, and I felt better for it. That was something I could control: the distraction coming from my phone

These might be messages from friends, family, your boss or your bank. They might be breaking-news alerts, or reminders to drink water or meditate, or simply apps alerting you to their presence on your phone. (Turn those ones off, right now.)

Regardless of what the notifications say or if you opted to receive them, the cumulative effect can be overwhelming. Over the course of a day, notifications are an interruption, affecting your focus and performance.

A 2015 study from Florida State University found that, among students sitting a test that required their sustained attention, any audible interruption from their phone negatively affected the results. Just hearing the ping of a notification was as distracting as actually taking a phone call, suggesting to the researchers that “mobile phones can disrupt attention performance even if one does not interact with the device”.

It is that sense of being derailed that is increasingly leading people to turn off all (or nearly all) of their notifications. As Iqbal noticed the effect pop-ups were having on her peace of mind and productivity, she took action. “I turned everything off, and I felt better for it. That was something I could control: the distraction coming from my phone.”

Iqbal, who is 28, now works as a paediatrician. She is also a certified personal trainer and uses social media as a core part of her business. She manages this by only enabling badge notifications (a red dot on the icon on the homescreen, one of the least obtrusive options) for WhatsApp and one of her email addresses. She says she is less inclined to waste hours passively scrolling Facebook or Instagram after being diverted there by an alert, and she no longer feels she has to reply to messages instantly. “It hasn’t crossed my mind to turn them back on.”

It is only relatively recently that turning off notifications has been an option at all. After proudly publicising the 7.4tn notifications pushed through its servers in 2013, in 2018 Apple introduced features to grant users more control over how and when they were interrupted, such as a “do not disturb” function to help them “stay in the moment”. Google has rolled out similar “digital wellbeing” features for Android. Even Apple’s chief executive, Tim Cook, owned up to having “gutted” his own notifications, and encouraged all iPhone users to do the same. “It’s not something that is adding value to my life, or is making me a better person.”

‘Addiction’ gets tossed around all the time, but when we call it what it really is – a distraction – it becomes something we can do something about, and there’s no one to blame

But what if it is not the technology but ourselves that is the problem? Nir Eyal, a behavioural design expert and author of Indistractable: How to Control Your Attention and Choose Your Life, says that the leading causes of distraction are internal triggers: uncertainty, stress, anxiety and fatigue. Rather than reckon with them, it can be easier to blame technology. Developers’ tactics to get us to use their apps are good, “but they’re not mind control. A lot of people like to think we’re puppets on strings. ‘Addiction’ gets tossed around all the time, but when we call it what it really is – a distraction – it becomes something we can do something about, and there’s no one to blame.”

Rather than relying on willpower, Eyal favours a system (in his case, almost a microschedule) to get ahead of diversions before they happen. He says sometimes we might blame an alert from our phone for distracting us, when really we were not focused or being productive in the first place. “It’s not just about turning off notifications; it’s about knowing what you want to do with your time. You can’t call something a distraction unless you know what it is distracting you from.”

Tinkering with tech also saves us from having to confront a grimmer possibility: that even if it was taken off us entirely, we would still find means of distracting ourselves.

Nilli Lavie, a professor of psychology and brain sciences at University College London’s institute of cognitive neuroscience, says her research has established a clear link between people being distracted by their mobile phones and low mood – but a very strong association was also recorded with a wandering mind in general.

Another line of research has led Lavie to conclude that susceptibility to being distracted is in fact a trait – Lavie calls it “attention distractability” – that varies within the population. Although it is not yet known if, for instance, it is influenced by genetics, it is an established component of research into attention-deficit hyperactivity disorder. You may not meet the clinical criteria for ADHD, but if you fall higher on what Lavie calls “the inattention spectrum” you will be not only more vulnerable to distractions but also more consumed by them.

Lavie, like Eyal, is deeply sceptical of the argument that the problem is technology: “It’s very easy to just mute it, right?” she says. Instead there is a “generalised issue of distractability”. “Obviously mobile phones do come through as a large source of distraction, but our studies also showed it’s a wider issue.”

For example, says Eyal, people feeling overwhelmed might locate tech as the source when really it is their attitude to work – or their employer’s. If your boss were to call you on a landline late on a Friday night, asks Eyal, “Is it the telephone that’s at fault or the company culture that allows for that type of behaviour?”

Turning off notifications is so simple, but it’s so helpful. It’s that feeling of being in control of your time and your energy and your emotions, which I think is really important

Employees of Slack, the corporate instant-messaging platform that is often cited as a source of “notification spam”, are told not to use it after hours or at weekends, says Eyal – the message from the top being “work hard and go home”. It may not be notifications that we need to manage, but expectations: those of other people, and our own.

When Melissa Webb, a secondary school teacher, changed jobs three years ago, her new employer’s always-on culture exacerbated her anxiety and depression to the point where she had what she terms a “breakdown”. The constant emails from parents, students and colleagues manifested as notifications – “an enormous trigger” for her at that time, she remembers.

“When you’re going through mental-health problems, day-to-day life is really difficult, and you might not be in the space to properly respond to someone,” she says. “I think the notifications were symbolic of the expectation that other people had of me.

“You suddenly became aware that you need to be a good employee, good colleague, daughter, partner, friend. It linked into this thing of ‘I can’t be all of these things to all of these people; I can’t manage this workload, this social life.’ It was too much. Sometimes the content of them doesn’t matter – it’s just the feeling that you can’t escape.”

Webb, who is 29, is now a self-employed illustrator. She has 43,000 followers on Instagram, with whom she has frank conversations about mental health. “I’ve had very few people in real life that I’ve been able to do that with,” she says. “I never moan about tech – tech is amazing. It’s the reason why, in the last three years, I’ve been able to earn money despite not being able to be in a normal workplace.”

Her notifications, however, remain mostly switched off. “It’s so simple, but it’s so helpful. It’s that feeling of being in control of your time and your energy and your emotions, which I think is really important.” Iqbal actively guards those boundaries too. About a month ago Instagram started alerting her to direct messages. “That went off straight away. I don’t know why it happened – but it was a reminder of why I’d turned it off.” – Guardian