On the second night of their honeymoon, he brutally assaulted her

Review: TG4’s ‘Tabú’ estimates that 300,000 Irish people have suffered abuse from a partner 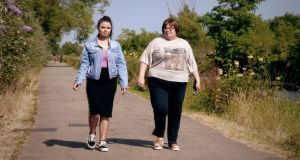 Ainie Grainger and her Mum, Priscilla Grainger. Both domestic violence survivors, they told their story in Tabú: Ag Teacht Slán on TG4

Beneath the horror of domestic abuse – its cycles of intimidation and fear, its emotional traps and psychological manipulation, the explosions of violence and its pathological concealment – is something just as distressing: the fact that these violations so often follow a pattern.

To those caught within an abusive relationship, that can be hard to appreciate, as when Priscilla Grainger recalls the change in her husband as something like a bolt out of the blue. “There were no warning signs,” she says, “no flags flying.” On the second night of their honeymoon, he brutally assaulted her. “I was shocked,” she says.

That shock may owe itself, in part, to the stigma around abuse in an intimate relationship. Tabú: Ag Teacht Slán (TG4, Wednesday, 9.30pm) estimates that 300,000 people in Ireland have suffered abuse from a partner, that roughly 75 per cent of women, and a similarly high percentage of male victims, never report it.

One tactic of abusers is to intimidate their victims into silence. How disturbing is it, then, that such a silence has allowed abuse to become so worryingly widespread?

It may be distressing to watch the contributors to this documentary relive their traumas, their words halting and voices breaking under extraordinarily painful recollection. But they are here to counter that silence, to shatter the taboo.

Like Priscilla Grainger , most have stories of survival to share. But the family of Ciara Campbell, murdered in 2007 by her ex-partner, must represent her.

What compels Ciara’s father Mícheál Ó Cuinneagáin to speak, so candidly and with such agonising detail about their experience, or Aisling Byrne, whose ordeal with an abusive husband intensified after the birth of her second child, if not the hope that others watching may be more ready to act?

In the case of a man known in the programme only as “Joe”, voiced by an actor, it was an anonymous member of the public who saw his wife striking their child in public, reported it, and brought an incredibly toxic situation to light. “I think that woman saved our lives, you know?” he says.

If the programme itself hopes to intervene, it is in highlighting how little provision there is nationally for women’s shelters, how overrun those that exist are, how taboo male victimhood remains, and how inadequate legal channels appear to be. The psychology of abusers is left unexplored, however, and whether such people are born or made, or if the propensity towards violence might be defused earlier in life. What, to hearken back to Priscilla’s words, are the warning signs?

What we have instead is an alarming report, whose alarm should awaken and rouse positive response. “There is always hope and light at the end of the tunnel,” concludes Aisling, now removed from harm and hopful for the future. “But you need to be able to protect yourself. You need to be able to call on every support that you can.”