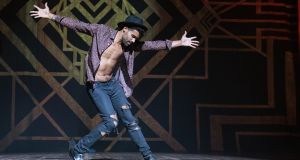 Leo Gallo in Westside. The show feels like it was created by an algorithm, adding a little bit of La La Land with a dash of The Hills. Photograph: Greg Gayne/Netflix

Netflix is dipping its toe into the murky waters of reality TV with the genre-bending docu-series Westside which follows the fortunes of nine struggling musicians brought together to create an original musical production for an LA nightspot.

With its high-gloss production values and dreamy cinematography, Westside looks like an Instagram fantasy with “reality” acting as a bold filter added to complete the picture.

When assembling his crew of singers and actors, stage producer Sean Patrick Murray sells the show by saying it will be “a place where art and commerce can meet”, making the endeavour sound as soulless and businesslike as a Russian oligarch’s private gallery.

This quote could define the series, a bizarre depiction of an industry at odds with itself, desperately trying to latch on to something. Westside feels like it was created by an algorithm, adding a little bit of La La Land with a dash of The Hills. Somewhere there is a production office with a whiteboard that bears the legend “Glee but make it gritty”. So in between slices of dramatic fly on the wall moments there are jarring video inserts that are reminiscent of the time S Club Seven had a sitcom, but minus the joy.

Everyone in the series sounds as though they were caught mid-counselling session. Someone proudly utters the epithet “Life is an asshole” at some point. These are the generation whose formative years were shaped by desperate kids’ tear-streaked faces pleading to judges on talent competitions, of stars like Lindsay Lohan and Britney Spears atoning for their wayward behaviour on talk shows.

The series is completely tainted with the idea of credibility; not an hour can go by without someone wittering on about their “authentic” selves, not realising that one of the keys to great reality television and stardom itself is the ability to keep it fake. None of the gormless pack appear to understand the value of the mythic illusion of the artist, having lived their lives online for so long that every mundane detail is recorded and embellished in lengthy posts on Medium.

It’s hard to care about this humourless bunch, always waiting to puncture each other’s conversations with their own inane opinion or prepared sob story. This reaches its apex when they are involved in a workshop that is supposed to help them bond by opening up to the group. What actually transpires is a shameless exercise in exhibitionism.

When asked to act out a traumatic monologue, flamboyant Austin Kolbe can’t help but push the stakes higher by actually ringing his mother and crying down the phone to the poor woman, asking her to apologise to him. She seems unaware that her son is exposing the fragility of their relationship for the adoration of a group of strangers who applaud him for his bravery.

This is the outcome of all those dead granny stories on shows like X Factor, where being a celebrity has become intertwined with trauma and the ability to commodify it and family dysfunction is thoughtlessly sold for a moment of stardom.

There are some moments of unintentional comedy, mainly when trucker hat-wearing, binge-drinking doofus James Byous who, in a Brentian flourish weeps “It kills me that a million people haven’t heard this song!” after he finishes singing an ode to himself – a tepid Kings of Leon effort.

Sadly, in the terminally serious world of Westside there is no room for a cheeky Tim Canterbury to break the fourth wall and offer the desperate audience a wink of acknowledgment, there is only the solemn, repetitive song of authenticity.

‘The Crying Game’: ‘They wanted me to cast a woman that was pretending to be a man’
7

The Golden Age review: A tough, intelligent story of displacement
9

Blindboy: ‘Being recognisable is absolute hell’
10