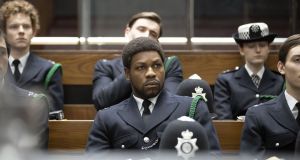 “I’m thinking of joining the force,” says John Boyega’s Leroy Logan early in Red, White and Blue (BBC One, Sunday, 9pm), part three of Steve McQueen’s Small Axe anthology series. “You gonna be a Jedi or something?” says his pal.

It takes nerve to chuck a Starkiller Base-size Star Wars reference into a grim and gritty interrogation of the racism encoded for decades into British policing. Boyega, as everybody knows, became famous for starring in the Disney Star Wars trilogy before taking the brave and necessary step of criticising the Mouse House for writing former Stormtrooper Finn – one of the few major black Star Wars characters – out of his own space epic.

Then, McQueen is nothing if not assured as a director and in Small Axe his exploration of the black British experience has been moving and provocative. So he gets away with a Star Wars nod. He also gets gets away with a downbeat conclusion in this retelling of the true life story of Logan, a hospital researcher whose decision to join the London Met in 1983 was in part motivated by police brutality against his father.

Boyega plays Logan as one of those quietly honourable individuals who know that sometimes people just have to do the right thing, regardless of the hopelessness of the situation. Because otherwise, how do things get any better?

Logan is under few illusions about the challenges facing him as he seeks to detoxify the Met from within. One black person isn’t going to make a big difference. But perhaps it will make a small difference. And maybe one day all those small differences will start to add up.

The abuse he experiences from both his own British Jamaican community and his white colleagues is vitriolic. The kids on the street called him “Coconut” (white on the inside). Later, he is almost beaten to death by a robber when the white cops with whom he has previously clashed ignore his call for back-up. They’re not that bothered whether he lives or dies.

The other source of tension is the relationship between Logan and his conservative Jamaican father Ken (Steve Toussaint). He is every bit as much a stickler for doing things correctly as his son. McQueen spells this out when Ken turns down the opportunity for a triple word score in Scrabble as it would involve spelling a mildly rude word.

The difference is that he is a prisoner to his anger whereas Leroy understands the importance of channelling emotions into positive action. This is where the Hollywood version of Logan’s life would perhaps lean into the Shakespearean melodrama, framing the father-son conflict as an existential struggle between the generations.

McQueen, though, resists sermonising. In the end Leroy and Ken muddle through. As does Logan in his police career. The message is that in the real world there is a limit as to what can be achieved by any one person – even a remarkable person portrayed on the screen by Hollywood’s John Boyega. But Red, White and Blue also argues that it’s when the odds are against us, it is important to keep striving. That’s how decent people make the world better, even when the world wants to keep them down.