TV review: As with every Toy Show, the sense of occasion is as big as the event itself

Covid regulations meant this years Late Late Toy Show made this years show the most challenging since the inception of the format in 1975. Video: RTE 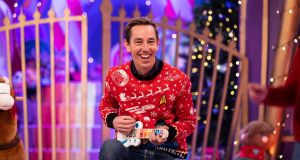 At the end of a long, strange year, can the Late Late Toy Show (RTÉ One) make us believe once again in a world of pure imagination? That’s the challenge facing RTÉ and Ryan Tubridy as they put on the first – and hopefully last – Toy Show in the age of social distancing.

The official theme of the evening is the work of Willy Wonka creator Roald Dahl. But it’s with a Bjork on the wild side that the evening kicks off, as Tubridy and performers from the Spotlight Stage School dance to the Icelandic pop star’s Oh So Quiet.

The incredibly surreal jamboree begins with a pre-recorded segment from the library of the Royal Irish Academy, where tiny dancers are dressed as giant bugs, Twits and Oompa Loompas (either that or they’re Leprechauns raiding the fake tan none of us had use for last summer).

And then it’s over to the studio where Tubridy is done up as Dahl’s Fantastic Mr Fox, flanked by a team of Matildas. It’s panto with a hint of Pan’s Labyrinth. But Tubridy clearly enjoys letting his inner dorky dad off the leash. and his enthusiasm is infectious.

Roald Dahl is a good fit for the 2020 Toy Show. His books never condescend to younger readers, always recognising that life has its ups as well as its downs. As Tubridy acknowledges “It’s been a long tough time for everybody…but don’t worry. Tonight we’re going to have a bit of a laugh.”

The set is impressive, with such Dahl-themed flourishes as a giant peach and Willy Wonka’s Chocolate factory gates. A video bank features off to the side has frontline workers and their families tuning in (they bag a gift voucher for their troubles).

Still, whatever about amazing chocolatiers or talking foxes, the real theme in the background is obviously the pandemic. This was always going to be a Toy Show like no other. The song and dance segments are required to follow strict social distancing protocols. And there’s no studio audience to gasp as Ed Sheeran / Davy Fitzgerald / the Dalai Lama jump from behind a sofa to surprise a delighted child.

There is, nonetheless, an early surprise guest. David Walliams beams in from London, where he has answered questions sent by eight-year-old Saoirse from Tralee. That follows a retro-flavoured piece in which Tubridy participates in a Shake ‘N Vac hoovering contest with siblings Grace (eight) and James (six) from Cork.

Adam, you're a star 🌟✨ @rte #LateLateToyShow .... I would love to meet you sometime and hear all about your love of #space 🚀 https://t.co/hjM50vMva5

Adam - I’ve been lucky enough to CAPCOM many spaceflights. We should talk space together. Take care, be good - Chris@RTELateLateShow https://t.co/XacYA9ncKT

A camping segment meanwhile sees outdoors enthusiast Sam trying to start a fire and then demonstrating his repertoire of bird impersonations and brandishing a glazed replica of Tubridy’s face. Things have gone Twin Peaks at least 40 minutes earlier than we all anticipated.

Later, Saoirse Ruane from Galway shares the contents of her fluffy backpack with the host. She also reveals that 12 months ago – on the night of the Toy Show – she was diagnosed with a tumour and had to have a leg amputated. In its place she now has a prosthetic limb with a unicorn emblem.

“She’s always talked about Disneyland and we said someday when the world is right we’ll bring her,” says her mother, after Tubridy reveals the Ruanes are to be sent on a family holiday to the Magic Kingdom.

Tubridy, having swapped the fox suit for an “elf and safety” Christmas jumper, then announces a new charity – the Toy Show Appeal – helping Barnados, Children’s Health Ireland and Children’s Books Ireland. More than €5 million is raised by the end credits.

The second big song and dance routine is a performance of Singing in The Rain, shot in the middle of a serious downpour on the Fair City set.

Tubridy next introduces Aidan from Midleton, Co Cork, who has a huge collection of toy trains. This is followed by a board game section presented by denim jacket-wearing AC/DC fan Annie (“the first rock band I liked was probably Metallica”), which is includes what sounds suspiciously like an F-bomb from Tubridy as a Fanta Orange-based set-piece goes awry.

Then comes another big musical routine, as kids from Irish families from around the world join in on Take That’s Rule the World – with a guest appearance from Take That’s Gary Barlow, crooning from his lockdown shed.

And then Adam from east Cork offers Tubridy a virtual hug and is reunited with his favourite hospital porter, John Doyle, from Temple Street. “Adam has such an infectious smile that even the darkest planet would light up,” says Doyle. That sobbing sound – it’s you, crying .

Midnight suddenly isn’t all that far away. Yet there is time for some final surprises. First, Michael from Ballina is interrupted while performing Dermot Kennedy’s Giant…by Dermot Kennedy. Michael is genuinely surprised - shocked really – but bravely pushes on as the two duet. “He’s so good,” says Kennedy. “I was more nervous than you.”

Finally, 10 year-old-rocker Noah from Louth belts out his future global number one Rock Is The Best Medicine, and viewers everywhere draw a breath and say to themselves: “He’s right. Rock IS the best medicine.” The Edge would seem to agree – he beams in from his lockdown mansion and presents to Noah a signed guitar (Noah: “That’s grand!”).

A glance at Twitter confirms the entire country seems to have tuned in – and is trying to work out what Grace and James’s puppet show was about (my guess is that it’s a free-form retelling of Frank Herbert’s God Emperor of Dune).

The excitement on social media confirms that the appeal of the Toy Show is only partly connected to what’s unfolding on screen. As with every other recent Toy Show, the sense of occasion is almost bigger than the event itself.

That’s particularly true for parents experiencing the show through the filter of their own memories of staying up late to watch Gay Byrne negotiating the chaos in the 1980s. There is a feeling of passing on a beloved tradition to their own kids.

In that way, it’s reassuringly old fashioned – sweary Tubs in his fox tux notwithstanding. A case can even be made that it’s as bound up in the fabric of Irish Christmas as stuffing sandwiches, Wren Boys and slipping into a turkey-fuelled stupor in front of a James Bond film.

And with a possibly very weird December 25th ahead, there is something reassuringly “old normal” about joining Ryan Tubridy on his trip to toytown.