Manchester: The Night of the Bomb – ‘The brave girls who refuse to be victims’ 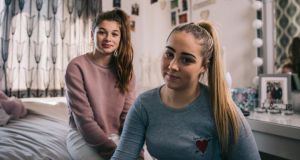 Manchester: The Night of the Bomb: “I can just beat him,” 15-year-old Eve (left, with her sister, Amilia) says about the suicide bomber. “He doesn’t matter”

“It was the loudest I’ve ever heard anyone scream,” says one young girl who was in Manchester Arena a year ago, on the night of the devastating suicide bombing.

Among all the details that Jamie Roberts’s heart-rending documentary, Manchester: The Night of the Bomb (BBC Two, Tuesday, 9pm) gives you to consider from that baleful night – the expectations of the young pop fans at an Ariana Grande concert, the awful carnage of the attack, the biography of the attacker and the inadequate rescue response on the night – those words are oddly consoling.

Spoken by 12-year-old Acacia Seward, among a flicker of images of girls brushing their hair to get ready, and phone footage from the concert, they convey not terror but sheer, undiminished excitement. She is recalling Grande’s encore, performed just a few minutes before the explosion, and to see her happiness at the memory undimmed by what followed is to see terrorism defeated.

The hair-brushing rituals of young girls is neither a trivial nor mawkish inclusion, instead weaving through the programme like a leitmotif, with a meaning that shifts between vulnerability and resilience. Because we know what is to come, all images of the concert seem like grim foreshadowing, from the stylised silver teardrops on the face of the performer to the explosions of the beat or the screams of the crowd. But that isn’t how the girls remember it, still awed by song and spectacle and celebration. Through their eyes you can separate the braid of joy from sorrow.

That we should learn the bomber’s story, one of misogyny and radicalisation, is grimly inevitable. But it’s the girls who are the story, and they refuse to be victims

Responders and survivors recall the attack in disturbingly vivid terms: the orange glow and rolling flames; the rattling machine-gun sound of shrapnel; the flesh and blood of 22 killed and more than 100 wounded that “people shouldn’t see”. One transport-police officer, who rushed in from the adjacent Manchester Victoria train station, recalls trying to calm a girl whose mother had died. “It was the single bravest thing I have ever seen in my life,” he says, without understatement, as she drew in a long, deep breath and asked him, “What can I do to help?”

Although Roberts indulges a needless thriller-movie structure (and soundtrack) to evoke the chaos of the attack, juddering back and forth as though the explosion had ruptured chronology, it is the immediate human response that feels truly astonishing. When paramedics arrived at the arena it was declared a “hot zone”, meaning attacks were thought to be ongoing, so no ambulance crews entered as victims lay dying. Instead 100 pedestrians and a handful of transport police who rushed to the scene improvised, with T-shirts for tourniquets and crush barriers for stretchers.

That we should learn the bomber’s story, one of misogyny and radicalisation, is grimly inevitable, and to highlight the abysmal response of emergency services is necessary – the fire brigade, which, like Greater Manchester Police, declined to take part in the programme, arrived more than two hours later. But it’s the girls who are the story, and they refuse to be victims.

“They shouldn’t think of him,” says 17-year-old Amelia Tomlinson, now intent on becoming a police officer. “They should think of the concert.”

Roberts is discreet about any injuries sustained, but to see the girls again doing their hair is to see girlhood, and life, bravely going on. “I can just beat him,” says 15-year-old Eve Senior. “He doesn’t matter.” The encore that shook the room that night was called Dangerous Woman.