Mairéad Ronan is this year's winner of Dancing with the Stars

TV presenter Mairéad Ronan has been crowned the Dancing with the Stars champion for 2019. Video: RTÉ 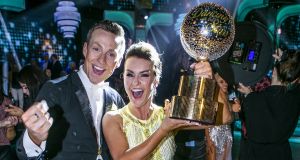 Mairead Ronan and John Nolan with the Gtitterball Trophy after winning this year's Dancing with the Stars. Photograph: Kyran O'Brien

After 12 weeks, one blackout, and enough Nicky Byrne one-liners to keep us ticking over for the rest of our lives, Mairéad Ronan has been crowned winner of Dancing With the Stars 2019.

“I never ever thought . . . I would be on this dance-floor picking up the Glitterball trophy,” says the Dublin TV presenter, dabbing away tears as she is hugged by her pro-dance partner John Nolan.

Her victory will be regarded as a surprise as she placed consistently behind the other finalists, Johnny Ward and Cliona Hagan. But she is perhaps the most relatable of the contestants. Ronan has spoken at length of her initial reluctance to participate in DWTS months after giving birth and of her fears she would not be able to perform to a sufficient standard.

So while Hagan and Ward were arguably more consistent across the past three months – and absolutely dazzling tonight – it is Ronan who has visibly grown through the competition. That was surely one of the factors that persuaded a quorum of viewers to back her in the public vote.

And there’s a guest turn from Louis Walsh shamelessly plugging . . . well, the new Westlife single (“it’s out next week!). Spied in the audience, meanwhile, is Taoiseach Leo Varadkar, who arrives straight from the Fine Gael Árd Fheis (all that noise and empty razzmatazz, followed by Dancing With The Stars).

Ronan’s twirl to victory brings down the curtain on a solid third season for the RTÉ ratings-buster. Dancing With The Stars 2019 hasn’t been perfect. New host Jennifer Zamparelli’s chemistry with Nicky Byrne has had all the spark of a tea-light in a monsoon. And the production values still scream “RTÉ”, with the absence of a live band underscoring just how far behind the series is from its big brother, Strictly Come Dancing over on BBC.

Still, there has been lots to enthuse about and the contestants themselves have been a mostly charming bunch. That continues through the last hurdle, beginning with Ronan and Nolan’s “judge’s choice” Charleston, to the strains of Sam and the Womp’s Bom Bom.

“You were Charles-tastic,” says adjudicator Julian Benson. “You used the arms much much better,” agrees Brian Redmond. “You’ve changed physically, it looks like you’ve changed emotionally.” His remarks hint at why Ronan ultimately swept to victory. She isn’t a perfect dancer – but her very human struggle to overcome her natural reticence on the floor has carried us along.

Next it is Johnny Ward and Emily Barker, tasked with re-tooling their controversial foxtrot – it wasn’t very foxtrotty, goes the criticism – and improving on their original score of 19. This they achieve, as they sway and look a bit sad (to be fair they’re dancing to Niall Horan). Unlike their original take, there are no hops, handstands or Ward jumping over Barker on a flaming motorcycle (this definitely happened).

“You were like a leading man tonight Johnny,” says Benson. “If these two don’t agree with me, I’m going to eat my jacket.” Redmond and Loraine Barry agree sort of and praise the Love/Hate actor for re-imagining the performance, though  his score of 28 feels slightly “meh” on the night.

Last is Cliona Hagan and Robert Rowinski reprising their week one quickstep to Luke Byran’s Country Girl. After that, the three finalists return to perform their own favourite dances and to then deliver a bespoke piece showing everything they’ve learned since January. The undoubted over-achiever here is Hagan who literally pounces on her pro partner Rowinski with a feral turn that sends jaws clattering to the ground.

Alas, it isn’t enough to carry the day and while Twitter of course has its own views as to the outcome – the usual mix of anger, frothing self-righteousness and head-scratching – the plain truth is that sheer likability has propelled Ronan over finish line. That the most sympathetic participant would bring home the spoils in a reality contest seems to have caused waves of disbelief. But surely the biggest surprise of all is that anyone could be shocked by the result.