Reality TV: A reboot that feels fresh and necessary in a time of despondency 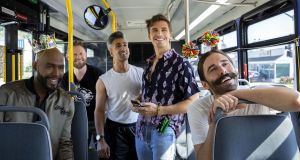 The Fab Five from Queer Eye.

After two seasons of promoting positivity and self-care through the mashing of avocados and the use of a good serum, the new incarnation of Queer Eye is a genuine sensation. Like the Spice Girls before them, the Fab Five, with their identifiable traits and specific areas of interest, sparked a fevered fandom whether you loved hair-flipping grooming guru Jonathan Van Ness, sophisticated smoothie Karamo Brown or Baby Spice himself Bambi-eyed Antoni Porowski, there was something and someone for everyone.

Although, as with everything that reaches a rapid ascent to a seemingly peerless status, the show now begins its third season with watchful eyes and ears on high alert for anything that could be deemed offensive enough to “cancel” it. Are we over Queer Eye already?

There have been several valid criticisms levelled at the show, from it not being a true representation of modern queerness (as it features five cisgendered gay men) to Karamo’s eyebrow-raising comments about the over-sexualisation of the gay community and his meetings with Karen Pence and even Antoni’s questionable cooking pedigree. But there is no denying that the show has been a welcome step forward, a reboot that feels fresh and necessary in a time of despondency.

Things have not changed that much in these Kansas-based episodes, Tan is still forcing the French Tuck on everyone, Antoni is making makeshift salads and designer Bobby (the show’s true heavy-lifter) is still absent from the fun proceedings, busy rebuilding actual homes while everyone’s enjoying a Spritz. It’s not as if they haven’t been listening to the criticisms, though, whether superficially with Antoni having reduced his serial killer stare and Bobby’s new beard being a welcome addition.

In this new season, rather than have Karamo attempt to counsel camo-covered hunter Jody about the fluidity of femininity, he introduces her to a group of local women who bolster her confidence about not having to “perform” in a certain way to feel feminine. Gone are the reflex bitchy comments that peppered the previous seasons (something that counteracted their guiding message of self-love), there is no judgment about participants’ housing situations or appearances. Instead, this season truly focuses on how people (especially men) are crippling themselves emotionally with self-deprecation.

As burly mental-health nurse Robert performs a roll-call of his faults, like a depressing comedy routine (“I look like a busted can of biscuits”), Karamo forces him to listen to a recording of his daily insults making him recognise how tough he is on himself, how he insists on delivering the punchline of a joke that no one has even thought of. It’s about what men conceal, that they are starving for affection, especially when they are encouraged to sneer at any display of emotion.

In an earlier episode they again try to nix this stigma around the perceived selfishness in treating yourself with care and gentility. Camp programmer director Joey is so far removed from seeing himself as a viable, worthwhile human that he doesn’t even bother with personal hygiene, having spent years living in a ramshackle caravan. As an ex-alcoholic and previously absent father dealing with residual guilt, he seems intent on punishing himself.

When the spruced-up Joey is finally revealed, he breaks down, thanking the fivesome. It’s not all Oprah-like philosophising, though. There’s still room for humour, with Jonathan watching Joey cooking with his son and commenting that it’s like a “father-son Ghost moment” or when feisty barbecue pit-master Mary reveals that her purse is actually a black bin bag, much to stylist Tan France’s utter bemusement.

Mary and her sister Deborah’s story is the most affecting of the bunch, a masterclass in what Queer Eye does best as it manages to convince the hard working, unfussy pair that they are worthy of the respect they treat everyone else with. The blunt triumphalism of RuPaul’s maxim: “If you can’t love yourself, how the hell are you gonna love somebody else?” may not be the solution for everyone. With this new season of Queer Eye, the Fab Five take the subtler route to the same direction, the destination to a happier self and understanding that there’s no place like home.